Rains bring Hyderabad to a standstill

Bikers are forced to take shelter from the heavy rains under a flyover (Photo: S. Surender Reddy)

Hyderabad: The city was hit by another spell of copious rains, which disrupted normal flow of life, and brought traffic to a standstill. Water was found flooding different parts of the city, low-lying areas and stagnated on the roads. The rains have left behind water puddles all over. At the ends and sides of roads, below and at the mouths of flyovers, standing water reduced the city to a partially flooded metro in despair.

One of the major reasons for stagnation of water in different places was the slopes and gradients in road levels, and engineering flaws, which were not allowing for a natural or smooth flow of water into the drains at Begumpet, Necklace Road and the metro rail corridors. This was seen leading to an overflowing of drains in some parts of the city and caused very slow movement of traffic in the city. 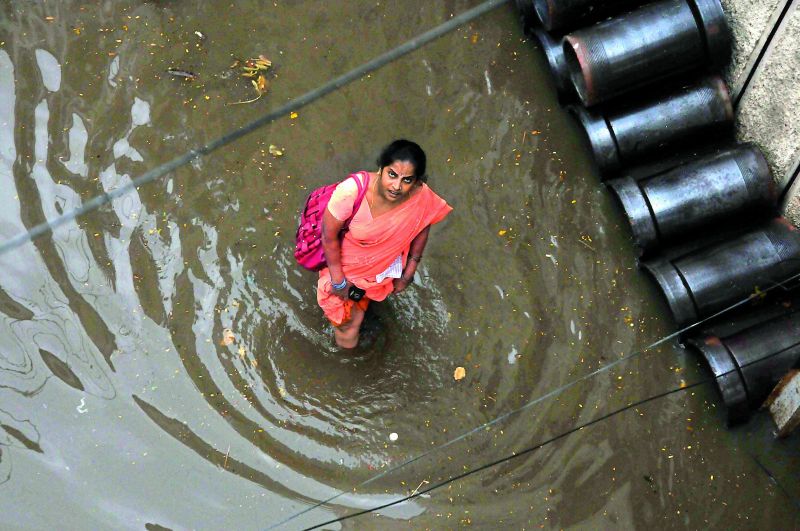 A woman walks through water in Malakpet. (Photo: DC)

Officials of the Greater Hyderabad Municipal Corporation were seen clearing clogged water near the Secunderabad railway station, Lakdi-ka-pool, Necklace Road and the Raj Bhavan in the city.

With garbage clogging residential areas such as Sindhi Colony, Yousufguda and Ameerpet, people were forced to wait and wade in stagnant water. The situation was no different in commercial areas of the city.

Adding to the woes of commuters, stagnant water on the roads were being sprayed for mosquitoes, even as pedestrians and motor vehicles were making their way through.

Though rains in September are not usually expected to be heavy, the rainfall on Thursday has taken the GHMC officials completely off-guard, as stagnation of water made the already deplorable situation of the civic condition of the city, worse.

Covid19 cases rise to 62 in Haryana