UP train mishap: Prabhu asks Railway Board to fix responsibility by today

New Delhi: Railways Minister Suresh Prabhu on Sunday directed chairman, Railway Board, to fix responsibility on "prima facie evidence by the end of day" into the derailment of the Utkal Express in Uttar Pradesh.

The minister said he was monitoring the situation closely and that restoration of tracks was his top priority.

Over 20 people died and 156 were injured after 14 coaches of the Utkal Express derailed near Muzaffarnagar in western Uttar Pradesh yesterday evening.

"Will not allow laxity in operations by the Board. Have directed CRB to fix responsibility on prima facie evidence by end of day," he tweeted. 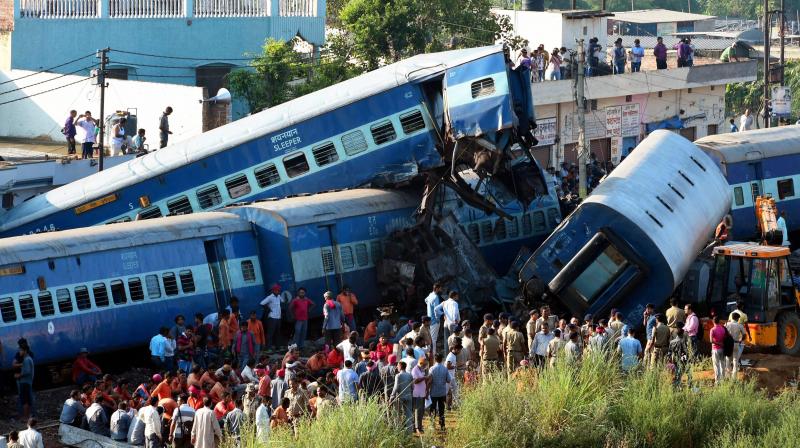 Coaches of the Puri-Haridwar Utkal Express train after it derailed in Khatauli near Muzaffarnagar on Sunday. (Photo: PTI)

The minister, who has been keeping a close tab on the situation since Saturday, directed senior officials and medical personnel to provide assistance to injured passengers and all possible help to relatives of affected passengers.

Prabhu had ordered an inquiry into the derailment on Saturday. He said he was personally monitoring the situation and strict action will be taken in case of any lapse.

The minister also announced Rs 3.5 lakh ex-gratia compensation for those who lost their lives, Rs 50,000 for the seriously injured and Rs 25,000 for those who received minor injuries.

Liquor prices to go up from today in Telangana