A police constable was trapped for a few hours in the flood-waters in Mulug mandal on Saturday. Villagers rescued him using a rope after the waters receded. (Photo:DC)

Hyderabad: Good rains are likely in Telangana, coastal AP and Rayalaseema in the fourth week of August. Heavy to very heavy rains and thunderstorms are expected in the two states. The SW Monsoon is active over TS and coastal AP.

August is considered a crucial month for monsoons in the two states. At present, Telangana is facing a rainfall deficit of 15 per cent. The state was supposed to receive 513.9 mm of rainfall, however, it recorded only 434.8 mm. Coastal AP has a surplus of 18 per cent but Rayalaseema is a border case.

On Saturday, all TS districts received moderate rainfall. However, Warangal and Khammam recorded heavy rains, but despite this, many districts are still facing shortage. Among coastal AP districts, East and West Godavari received a heavy spell. 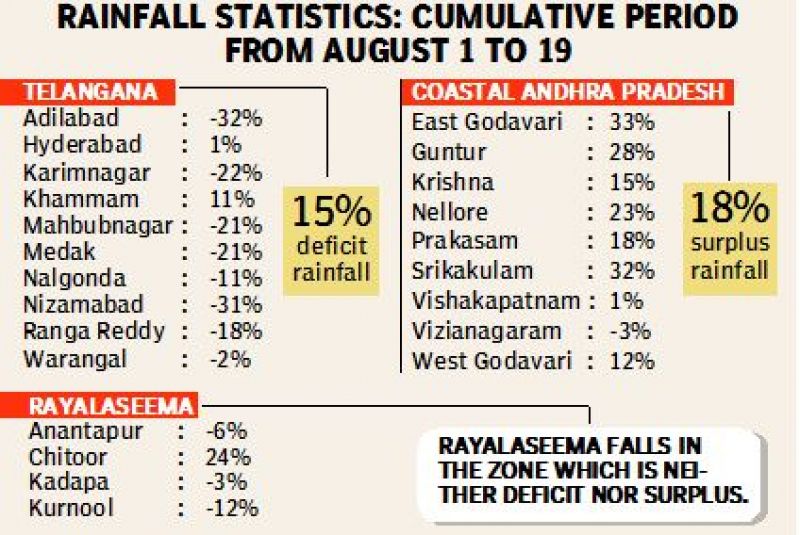 Monsoon currents have been strengthened by the low pressure area over north coastal AP and adjoining areas of south coastal Odisha and west central Bay of Bengal. This weather system is building up in intensity.

Hyderabad has been rece-iving rainfall since 48 hours, but the intensity of the current is absent. There is no trace of heavy spells. The forecast from August 20 to 25 is a generally cloudy sky with a few spells of rains or thunderstorms.

Warning: Coastal AP is likely to receive isolated heavy to very heavy rainfall in all districts from August 20 to August 31. While there is no warning for Rayalaseema, light to moderate rain and thundershowers are likely to occur.

In Telangana, heavy to very heavy rain is likely in all districts on August 20 and 21.

The rains have given life to Kharif crops which were on the verge of dying. In the last 48 hours, sufficient rains were received and farmers have commenced operations.

In Nalgonda, Adilabad and Nirmal, farmers are happy with the rainfall. In combined Nalgonda district, the rains gave a boost to the rainfed crops.