The vaccination exercise commenced at 6 am in 2,232 centers set up across the 13 districts.

The decision of Chief Minister Y.S. Jagan Mohan Reddy to offer the necessary training to the medical and health personnel in advance for the exercise bore fruits as over a million could be vaccinated, said an elated A.K. Singhal, principal secretary (medical & health). 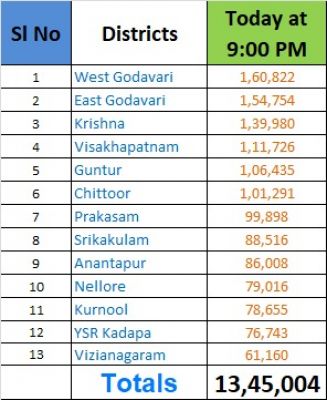 While other states are conducting vaccination for a maximum of 3 lakh people, Andhra Pradesh could cover 11 lakh vaccinations in a single day, without any wastage of vaccine, said the official. He said that so far 1,23,16,609 vaccinations were carried out in the state till Saturday and among them, 96,69,898 received the second dose.

Officials said the vaccine stocks were delivered in time to all the designated centres across the state in the shortest possible time due to effective planning. A robust network moved the vaccines coming from the Center to the Central Vaccine Storage Center near Gannavanam airport and from there to Srikakulam to Anantapur without any delay.

Special attention was paid to cover mothers with children below 5 years, apart from foreign-bound students and those above 45 years, said Singhal.

During a visit to Tirupati in Sunday, he inspected the special vaccination drive taken up in the city. He observed the vaccination programme in urban health centres located in Nehru Nagar, Prakasam Park and interacted with beneficiaries.  Raviraju and Molakaiah who administered the vaccines informed him they were feeling well after getting the jab. They said they had been following Covid safety protocol and no one in their families was infected with the virus.

Speaking to media, Singhal said the health department has administered 6,29,000 doses in a single day during a special driver earlier.

Tirupati municipal commissioner P.S. Girisha informed that they had set up 34 vaccination centres in Tirupati and set a target of 6,000 doses in the civic body limits. DMHO U. Sreehari, Tirupati RDO Kanaka Narasa Reddy, Ruia Hospital Superintendent Bharathi and others were present.