BJP-PDP alliance ends in Kashmir: Centre to up ante against terror

New Delhi: With the BJP pulling from the Mehbooba-led government in Jammu and Kashmir on Tuesday just after the month-long Ramzan ceasefire hiatus, Operation All-Out is set to begin with a renewed thrust to eliminate Kashmiri militants and smash their networks.

Speculations are rife that the Centre could possibly appoint a new governor in J&K after the Amarnath yatra, which starts on June 28 and will continue for two months.

Speaking to a news agency, a senior BJP leader said the government “would like incumbent N.N. Vohra to be in charge of the annual pilgrimage given his vast experience.” 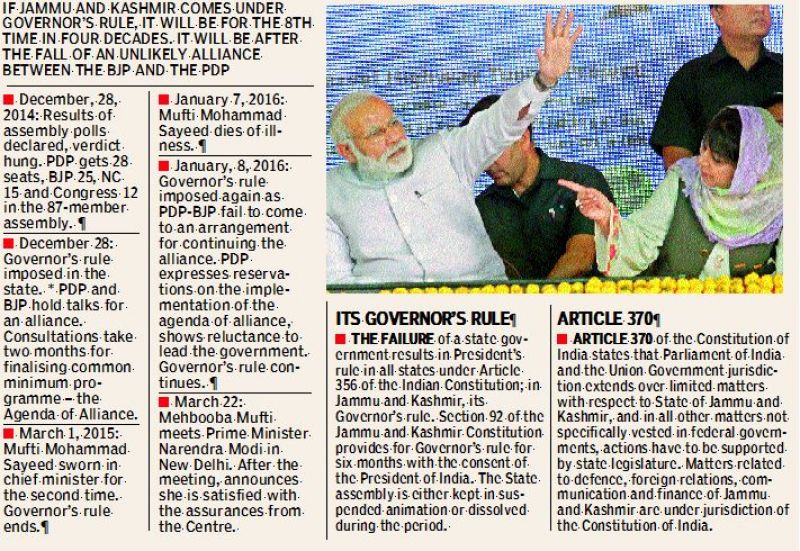 It may be recalled that Mr Vohra, who was appointed governor in June 2008 and given a fresh term in 2013, is among the few governors appointed by the UPA government to have continued in his position in the BJP-led NDA dispensation.

On Wednesday, defence minister Nirmala Sitharaman will visit the residence of the murdered soldier Aurangzeb in Poonch. She will also meet top officials handling security duties.

That the crackdown has already begun became clear with a top security officer whose mandate includes Kashmir operations saying: “As soon as the Ramzan ceasefire ended, we already undertook two operations in Bijbehara and in Pampore. Even today, there was an operation in Traal, so Operation All-Out is definitely on now.”

It may be recalled that the Centre had categorically turned down Ms Mufti’s appeal to hold talks with the Hurriyat leaders. The Army was also reportedly against the unilateral ceasefire.

■Former J&K CM Omar Abdullah expected it, but later in the year
■Road ahead is bumpy for Mehbooba Mufti