DECCAN CHRONICLE. | N S CHOWDARY
Published Apr 20, 2019, 6:55 am IST
Updated Apr 20, 2019, 6:56 am IST
Prolonged usage of invasive devices and antibiotics are some of the factors that increase the risk of infection in healthcare units.

Negligence by the hospital staff often leads to HCAI among patients.(Representational Image)

Visakhapatnam: Doctors are becoming increasingly concerned about the risks of nosocomial infection or health care associated infection (HCAI) due to lack of proper hygiene in the healthcare centres.

Negligence by the hospital staff often leads to HCAI among patients. Patients have a high chance of acquiring serious infection in a hospital setting, where basic medical care for common health problems is being provided. Every hospital admission will end up with up to 10 per cent risk of acquiring new infection.

“Similar to government hospitals, some private healthcare centres fail to combat infections that can be acquired in both hospital and nonhospital settings. Some nurses will not check if the cannula is properly inserted in the vein of the patient or not. They will keep on medication even when it starts swelling,” said a Vizag-based doctor on condition of anonymity.

Explaining the conditions leading to HCAI, the doctor said: “Patients, who already have serious health issues, are at high risk for contracting nosocomial pneumonia. It is a serious infection that may result in death, in some cases. However, the doctors reflect that the death was because of the gradual development of the disease.”

“Even healthcare professionals at government hospitals or private clinics are unaware about the reasons for HCAI. Á pneumonia patient cannot be hyper ventilated with extra oxygen above saturation time. Few antibiotics must not be given more times. Such negligent aspects must be avoided,” the doctor said. 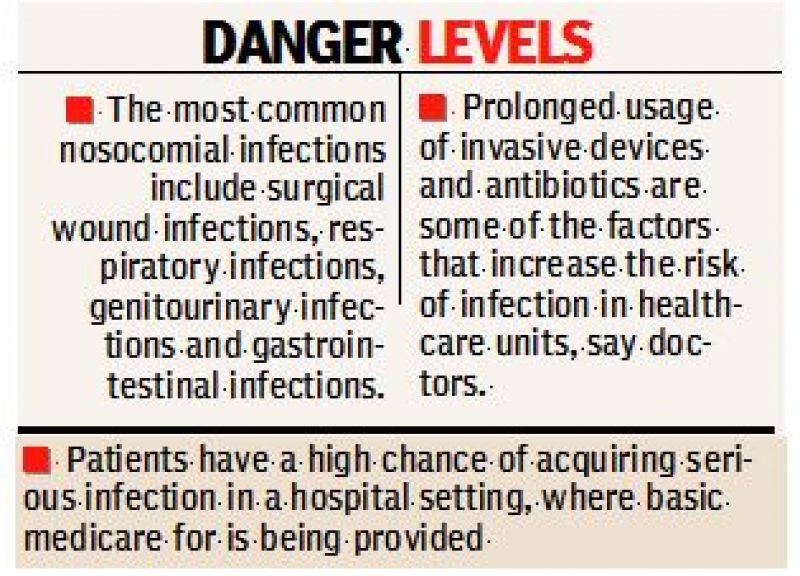 The most common nosocomial infections include surgical wound infections, respiratory infections, genitourinary infections and gastrointestinal infections. As per World Health Organisation, 10 out of 100 hospitalised persons in a developing country will acquire at least one HCAI.

More than 20 per cent of all nosocomial infections are associated with the stay in intensive care unit (ICU). The frequency of ICU-acquired infection is at least 2 to 3 fold higher and the device-associated infection densities are up to 13 times higher in India when compared to high-income countries like the US.

Prolonged usage of invasive devices and antibiotics are some of the factors that increase the risk of infection in healthcare units.

Under-staffing, overcrowding, poor knowledge, inadequate infrastructure, inappropriate use of catheters, lack of infection control policy are some of the other factors. A stethoscope is also a potential route of infection transmission.

In order to prevent HCAI, King George Hospital (KGH) has formed infection control committee with a microbiology associate professor as the nodal officer.

The six-member body recommends the doctors of government hospital to maintain hygiene in the ICUs, operation theatres and wards. KGH mostly uses disposables and does fumigation regularly.

Hyderabad rains aftermath: 53 lakes damaged, others may breach too

No indication of any tactical military help from China to Pakistan: Indian Army