New Delhi/Lucknow: At a time when the saffronites are up against triple talaq and cow slaughter, Muslim bodies welcomed the Supreme Court’s decision to revive conspiracy charges against the BJP  heavyweights ranging from the architect of Ram Janmabhoomi movement, L.K. Advani to saffron hawks like Uma Bharti and Viinay Katiyar.

The famous photograph of the sanyasan, Ms Bharti holding on to Murli Manohar Joshi, smiling gleefully as the kar sevaks, allegedly demolished the disputed structure on December 6, 1992, was flashed again on the TV screens on Wednesday as the top court gave the signal to level conspiracy charges against her and all the co-accused.

Some leaders of the community had been upset with the Supreme Court’s recent suggestion for an out of the court settlement to resolve the dispute.

Khalid Rasheed Firangi, member of Muslim Personal Law Board on Wednesday said, “Faith of millions of Muslims has been restored in the judiciary by reviving the case against conspirators. We welcome the SC decision. We had been waiting for this for the last 25 years.”

As the pitch against triple talaq continues to rise and attacks by cow vigilantes go on, Khalid Rasheed Firangi said the SC decision has come at the “right time.”

Speaking to this correspondent, he said, “the manner in which BJP has been talking on issues like beef ban, triple talaq, azaan, I think the ruling has come at the right time.”

He felt that the SC ruling has come “as a respite” for the minorities when the community was “feeling low and was under the impression that everything was going against them.”

He, however, said, “government is welcome to ban cow slaughter but innocent people should not be targeted.”

“It was a crime of national shame yet no action was taken against all those who were involved,” he said. Dr Ilyas hoped that the accused “will finally be convicted.”

Supreme Court invokes constitutional power
Let justice be done, though the heavens fall, the Supreme Court said quoting a Latin phrase to invoke its extraordinary constitutional authority to transfer the trial of a case against the VVIP accused from Rae Bareli court to a Lucknow court for joint trial of two sets of cases arising out of the demolition of the Babri Masjid.

The SC brushed aside the contention of L.K. Advani and M.M. Joshi that invocation of Article 142 “to do complete justice” to the parties before it, would scuttle their fundamental rights. The SC said this power exists with it as the judgement delivered by it will finally end the litigation.

25 years
After special judge S.K. Shukla dropped conspiracy charge against 13 accused, including L.K. Advani and Kalyan Singh in the special CBI court in Rae Bareli on May 4, 2001, the case has returned to haunt the BJP and its senior leaders. 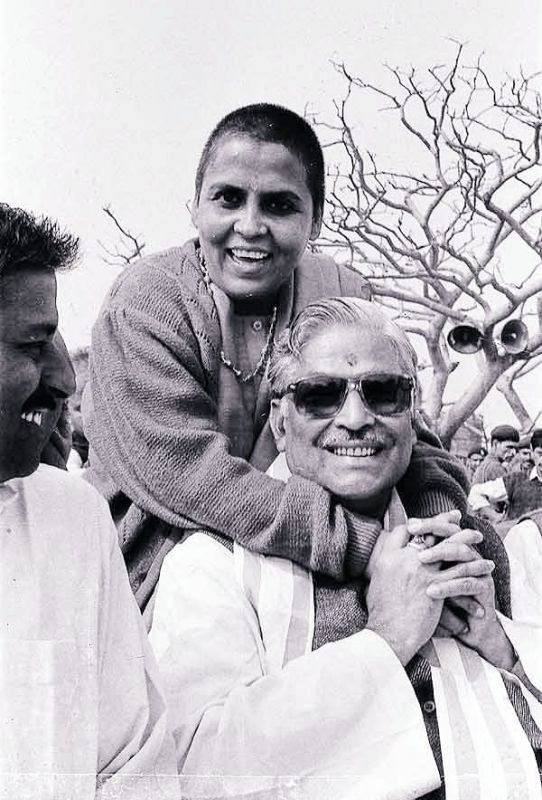 Uma Bharti with Murli Manohar Joshi after the demolition of the Babri Masjid.

The Babri mosque demolition case stemmed from two crime files that were filed shortly after the demolition of the mosque on December 6, 1992.

Crime no. 197/1992
This case was registered against ‘lakhs of unnamed kar sevaks’. This FIR dealt with the actual demolition of the mosque.

Crime no. 198/1992
This case was registered against those persons who were on the stage when the demolition took place. The accused included Ashok Singhal, Giriraj Kishore, L.K. Advani, Dr. Murli Manohar Joshi, Vishnu Hari Dalmia, Vinay Katiyar, Uma Bharti, and Sadhvi Rithambhara. Mr Kalyan Singh, who was then Chief Minister of Uttar Pradesh, was also named as a conspirator in the case.

Two of the accused Acharya Giriraj Kishore & Ashok Singhal have died
There are 22 accused, mostly leaders of the BJP and Shiv Sena, including current BJP MPs from Faizabad and Unnao, Lallu Singh and Sakshi Maharaj respectively.

Serious charges
22 accused are facing trial under IPC Sections 120B (conspiracy), 147 (rioting), 149 (every member of unlawful assembly guilty of offence committed in prosecution of common object), 395 (dacoity), 332 (voluntarily causing hurt to deter public servant from his duty), 338 (causing grievous hurt by act endangering life or personal safety of others), 201 (causing disappearance of evidence of offence, or giving false information to screen offender). Also, 153A (promoting enmity between groups on grounds of religion, race, place of birth, language, etc., and doing acts prejudicial to maintenance of harmony), 153B (imputations, assertions prejudicial to national integration), 295 (defiling place of worship with intent to insult the religion of any class), among others.