New Delhi: The wax figure of Prime Minister Narendra Modi has joined the likes of world leaders and other famous personalities at the Madame Tussauds in Singapore, Hong Kong and Bangkok. It is to be unveiled in London next week.

Modi, 65, had come face-to-face with himself in wax on Monday at a private viewing organised at his 7, Race Course Road residence. That figure will now travel to Madam Tussauds headquarters in London and will open to the public on April 28.

The video, in which the Prime Minister is seen closely examining the statue, was recorded when it was shown to him. 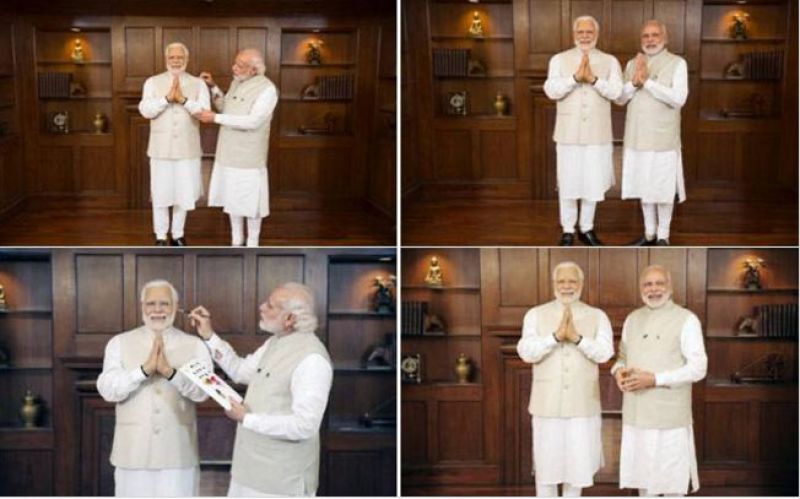 Dressed in Modi's trademark cream-coloured kurta and sleeveless jacket, the wax figure, which is seen striking a namaste pose, seems slightly taller that Modi himself. The statue cost £150,000 (Rs 1.5 crores each) and took four months to be made.

Modi ‘met’ the wax figure destined for the London attraction at a private viewing on Monday. “What can I say? As far as art is concerned, the Madame Tussauds team is exceptional at what they do. What Lord Brahma does normally is what the artists there are doing. Today, I had an opportunity as the prime servant of my people to meet my wax figure,” Modi was quoted as saying in a press release.

Officials of the museum had taken Modi's physical details and photographs in March when they visited his residence in New Delhi.

Madame Tussauds, the celebrated wax museum of London established in 1836, has branches in 20 cities across the world. It also has historical leaders such Mahatma Gandhi, Winston Churchill and Lady Diana.

“We will be delighted to welcome Mr Modi to the world stage at Madame Tussauds London,” commented General Manager, Edward Fuller.

“It’s wonderful that he had the opportunity to see his figure in India earlier this week before the public get the chance to meet him here. His social media following shows just what immense interest there is in him and I’m sure that interest will be apparent here too as guests get the chance to stand shoulder to shoulder with one of the most influential men in the world. And maybe even grab a selfie.”