The police seemed to have learnt no lessons from their failure to anticipate Monday’s protests.

The protesters, mainly from Arvind Garments and Jockey, who started forming small groups, were chased away by the police from Kodichikkanahalli, Bommanahalli, Bommasandra and Singasandra. But they started regrouping and started moving towards Hebbagodi.

Read: Bengaluru garment workers' protest: In 2001, too, it was the same issue — EPF

The Bangalore district police had not expected such a large turnout and were clearly outnumbered as the protesters suddenly turned violent. “We do not know what exactly triggered the protesters to go berserk. We are investigating into it,” said Superintendent of Police Ramesh Banot.

The situation was brought under control only after additional forces were rushed from the city police. “We received information that traffic was piling up in Hebbagodi as a large number of protesters were blocking vehicles on Hosur Road before the SFS Degree College.

Around 500 policemen were sent to the spot. We had to fire several rounds in the air, lob teargas shells and lathi-charge the agitators to bring the situation under control,” said Additional Commissioner of Police P. Harisekaran. “It was a well-coordinated act by mischief-mongers,” said a senior police officer, who was deployed for security at Hebbagodi.

How arson, vandalism unfolded
Hebbagodi turned into a battlefield by noon, as around 10,000 agitators had already blocked traffic and the pileup stretched up to a kilometre on Hosur Road. A few miscreants from among protesters first torched a commuter’s bike and immediately after set fire to two BMTC buses.

All hell broke loose when the policemen started caning the agitators, who were sitting on the road. The protesters retaliated by raining the policemen with stones.

Before the additional reinforcements from the city police reached the spot, miscreants in large numbers barged into the Hebbagodi police station, ransacked it and vandalised all that they came across. The miscreants then set fire to dozens of seized vehicles and police vehicles that were parked inside the police station. 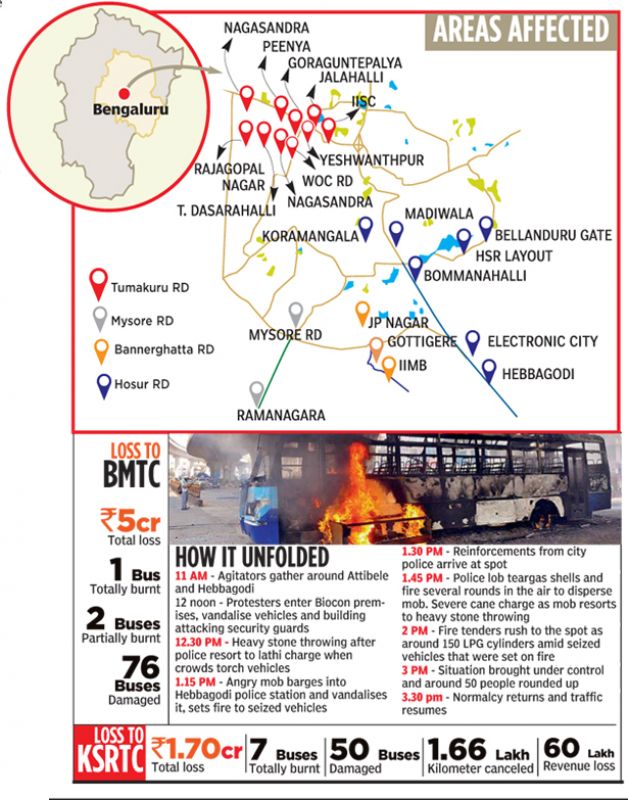 Fire close to seized 150 LPG cylinders
Panic prevailed when the fire came dangerously close to around 150 LPG cylinders that were full of gas. A fire tender was rushed to the spot and doused the fire. “A major disaster was averted by our timely intervention,” said Mr Harisekaran.

Biocon offices vandalised
The agitators demanded that thousands of Biocon employees join them in their protests, but as the Biocon staff refused, protesters barged into the premise, damaged the security cabin and set it on fire. They vandalised an ambulance and several other vehicles of the employees that were parked inside the premise.

Read: Neither police nor union leaders knew who was behind rioting

“We were scared about the safety of our 3,000 employees and evacuated them out of the building. We escorted all of them to the backyard of our building,” said Mr Rumman Ahmed, a senior manager. “We informed the police, but they arrived only at around 1.30,” he said.

Policemen injured
Twelve policemen, including a woman police constable, were injured in Hebbagodi. The woman constable, Nalinakshi, is attached to Hebbagodi police station and has been admitted to Sparsh Hospital for injuries as a stone hit her head.

■Bengaluru garment workers: Underpaid, harassed since the 70s
■Bengaluru protest: Neither police nor union leaders knew who was behind rioting