Police, the fire brigage and the National Disaster Response Force team at work at the under-construction building which collapsed in Dharwad (Photo:KPN)

Hubballi: Two people died and over 30 others were injured after an under-construction five-storey commercial complex collapsed at Kumaraswar Nagar adjacent to the new bus stand in Dharwad on Tuesday. 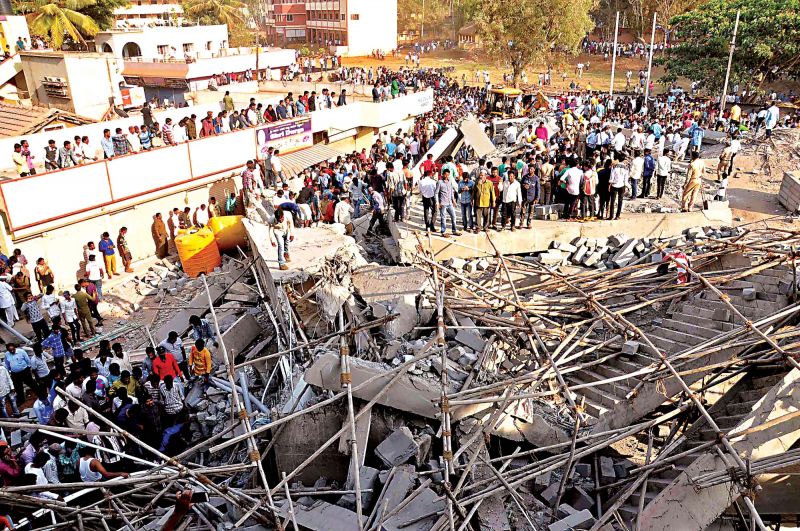 Fire brigade, police and other emergency personnel took up the rescue work immediately after the collapse to pull out those buried under the debris. A National Disaster Response Force (NDRF) team has rushed to the city from Bengaluru to take up the rescue work. The entire building reduced to rubble because of the sub-standard work and poor quality of materials used for the construction. One of the deceased has been identified as Saleem Makandar, while the identity of the other is yet to be established. Municipal authorities said that structural faults could be the reason behind the tragedy.

The building belonged to seven partners, including a relative of Congress leader and former minister Vinay Kulkarni. Hubballi-Dharwad Municipal Corporation officials said that permission was given for a five-storey building, while local residents contended that it had violated the building norms. The construction of first two floors was complete and over 15 shops, including hotels, grocery and furniture stores, were housed. The construction of the building started three years ago.

A commercial complex next to the collapsed building suffered some damage. The entire area was cordoned off by over 500 policemen and home guards to help the rescue work. Though some local residents were extending help, a gathering of a large number of people was hampering the rescue work, forcing the police to cordon off the area. The district administration too deployed hundreds of BSF jawans, who had arrived on election duty, to control the mob by imposing prohibitory orders in the area.

“We were having lunch on the ground floor after completing some part of painting work when the building suddenly collapsed on us. We were trapped inside and shouted for help. Over 50 workers, including carpenters and painters, were inside the building when it collapsed,” said painter Shivanand, who was rescued from the debris. The injured people have been shifted to Dharwad District Hospital and Karnataka Institute of Medical Sciences in Hubballi.

Gas cutters were being used to cut through the debris, while oxygen was being supplied through cylinders to keep the survivors under the debris alive. The rescue work continued throughout the night. More than 10 earthmovers, six cranes and over 20 ambulances are being used. Deputy Commissioner Deepa Cholan, Hubballi-Dharwad Police Commissioner M.N. Nagaraj were supervising the rescue operation.