Hyderabad: The sparrow and its chirp are rapidly disappearing. There has been a 70 per cent decline in the population of the species in India, the greatest recorded in the world.

Reasons for the fall in numbers are the increase in pollution, construction, and changes in weather. Nature-lovers say that this decline is harmful to our ecosystem because the disappearance of the sparrow could affect the entire food chain over time.

Amardeep Singh, a member of the Bird Water Society of TS and AP, says, “Central Hyderabad has very few sparrows. The existing population is concentrated in Barkas, near BHEL, Uppal and Medchal, where there are enough trees and shrubs for the birds to nest.

“Birds need building materials for their nests and privacy. They are susceptible to be disturbed by air and sound pollution.”  Rapid urbanisation has led to an increase in the number of concrete structures and a decline in the number of trees and shrubs. This makes it difficult for the birds to find food.

Students of Chicago University have studied the impact of air pollution on common species of birds. They have found that soot and oil can get deposited on their feathers and be extremely detrimental to them.

Sandeep Sasi, a bird watcher, says, “What affects birds abroad will affect birds here as well; we need to draw parallels. There needs to be continued research on the subject which focusses on areas where air pollution levels are high.” The use of pesticides in commercial plantations has also been linked to the decline of the species.

C. Srinivasulu, a professor of zoology, says, “One of the most important studies conducted in relation to air pollution and birds in India shows that there has been a sharp decline in the number of birds found at coffee, cashew and other plantations, due to the abundance of pesticides used.

Research has found that small-bodied animals drop dead within four hours or less after feeding on a plant on which pesticide has been sprayed.”
Nature-lovers say that although the celebration of World Sparrow Day began at a time when sparrows were ubiquitous, it has now become an occasion to highlight the grave situation that the species faces and the need for its conservation.

“We should try not to shoo away small-bodied animals that build their nests within our premises. It is no longer enough to keep water bowls out for them. We need to care more and spread more awareness to ensure that sparrows once again become abundant in cities and towns. We should learn to co-exist with these birds,” says Sandeep. 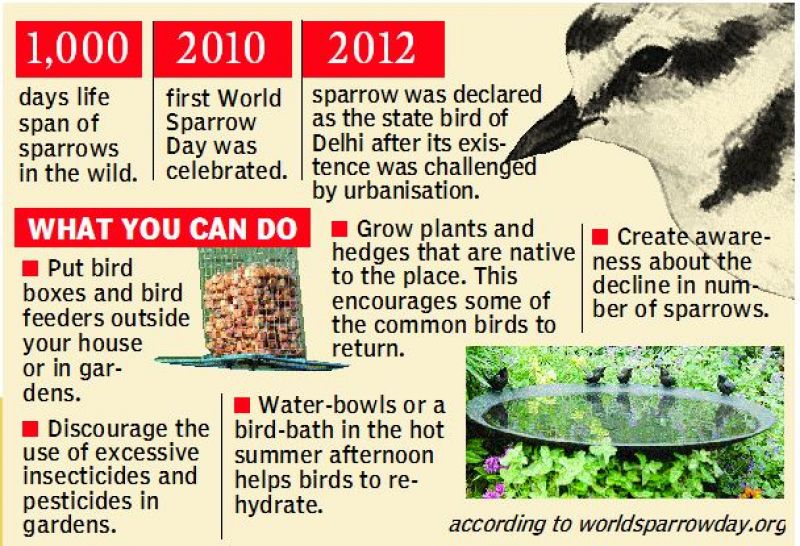 Spot registrations for second dose of vaccine from today; no first dose till May 12

SC rejects plea against delay in hearing on central vista

Night curfew extended in Telangana till May 15