Telangana: Rain-hit farmers to get relief

The state government directed agriculture and horticulture  departments to visit the affected areas to assess the crop loss and submit the report at the earliest.
Chief Minister K. Chandra-sekhar Rao is expected to announce compensation for farmers in the ongoing Budget session.

The unseasonal rains and hailstorm wreaked havoc in Nizamabad, Kamareddy, Adilabad, Ranga Reddy and Nalgonda districts. Agriculture minister Pocharam Srinivas Reddy said that the rains and hailstorm occurred in two phases, causing loss to standing crops. They occurred on March 6, 7 and again between March 10 and 15, he added. 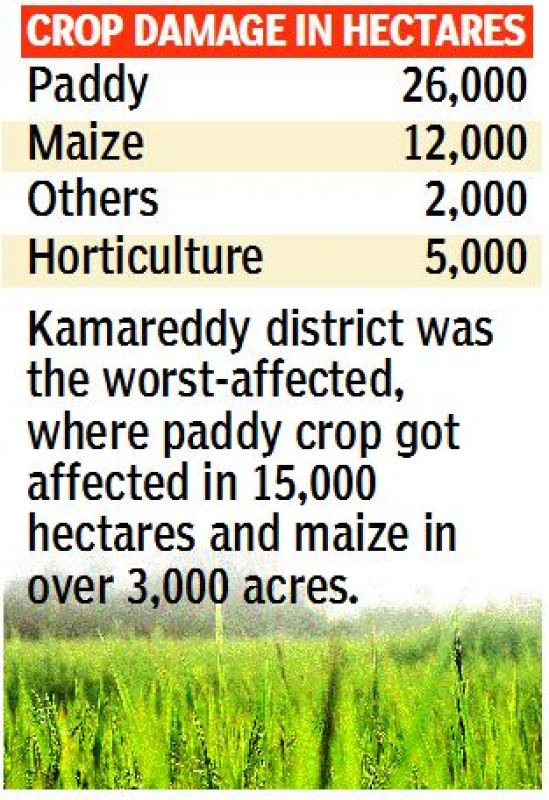 Kamareddy district was the worst-affected among all, where the paddy crop got affected in 15,000 hectares and maize in over 3,000 acres. The rains have also caused a heavy loss to horticulture crops.

It was found that horticulture crops over an extent of 5,000 hectares worth Rs 10 crore were damaged. However, Mr Reddy said the officials are yet to submit a final report to the government on crop loss.

“The final report is expected in a day or two and will be submitted to the government. The Chief Minister will announce a compensation for farmers in the ongoing Budget session. The government will also provide input subsidy to affected farmers,” Mr Reddy added.