The 'Naanu Yaaru Gothilva' or the 'Tu Jaanta Nahi Main Kaun Hoon' syndrome raised its head all over again in Bengaluru this weekend with the dadagiri demonstrated by MLA N.A. Haris' son Mohammad Nalapad Haris, being only the latest incident in a long line of similar acts  - goondas running amuck, assaulting innocents and evading arrest using their political clout to slip away. Mujahid Deputy and Ralph Alex Arakal recount how in this case, even the bouncers refused to step in and protect the victim, Vidhwat. With all eyes on the police, this time at least, the law must be seen as serving the cause of justice. Time to set an example, Mr Chief Minister?

The ‘Tu Jaanta Nahi Mera Baap Kaun Hai’ attitude of the sons of politicians is becoming the new norm in Bengaluru with at least a few of them accused of  “dadagiri”  in recent years, assaulting innocents and  evading arrest using their political clout. Shamefully, the police, acting  under  political pressure, usually comes to their rescue by booking them under bailable sections of the Indian Penal Code, overlooking the serious nature of the assault they are accused of.

The recent incident of Shathinagar MLA, NA Haris’ son, Mohammad Nalpad Haris allegedly assaulting a 24-year-old man in a restaurant in UB City, is not the first of its kind. The youth leader has been accused of provoking brawls  in the past too, but has always managed to walk free.

On Saturday night,  Cubbon Park police inspector, Vijay Hadagali was allegedly reluctant to register an FIR against him when the alleged victim, Vidvat’s friend approached him with a complaint. When he finally did register it, he made sure Mohammad would get bail easily  by booking him under less serious sections of the IPC. And on Sunday he was suspended by city police commissioner, T Suneel Kumar for dereliction of duty.

Not too long ago, on September 27 last year, Geetha Vishnu, grandson of liquor baron and former MP, the  late D K Adikesavulu, was arrested by the police after 110 gms of marijuana was found in his SUV that  rammed into a Maruti Omni at the South End Circle in Jayanagar. But Vishnu managed to escape from Mallya Hospital while in police custody and surrendered only five days later.

A few years ago,  in October 2006, former Chief Minister, H D Kumaraswamy's  son, Nikhil Gowda allegedly assaulted the staff of Hotel Empire International on Church Street after the restaurant refused to serve him as it was  closing time. Nikhil and his friends, who were allegedly drunk, were injured in the fracas as the staffers retaliated. In this incident too, the Cubbon Park police only registered a complaint against the hotel staffers, but did not book Nikhil and his friends.

Mr Ravi Krishna Reddy, president of the Luncha Mukta Karnataka Vedike, is not surprised by politicians indulging in ‘goondagiri.’ “This has been going on for a long time and only the people can change this trend by electing good representatives to lead them. Those who are supposed to be in jail, have become leaders and are controlling the police, who should be  independent,” he regrets, charging that  the police, who take an oath to uphold the Constitution, eventually end up becoming faithful to individuals and politicians.

No question of resigning,I made my son surrender: N.A. Haris
Setting to rest  rumours of his resignation,  Congress MLA from Shanthinagar, N.A. Haris claimed on Monday that it was he who had persuaded his son,  Mohammad Nalapad Haris to surrender before the police. Soon after he allegedly attackeda fellow diner , Vidvat, at an upscale restaurant in UB City, Mohammed is said to have underground,  switching off his mobile, before finally giving himself up. On Monday, Mr Haris came before the media and talked  about the issue at length, saying it was he who had forced his son to surrender. "What can we do if he switches off his mobile and sits somewhere? When he called his mother, I persuaded him to surrender and  sent him to the police this morning. If he was with us Sunday we would have made him surrender earlier," he added.

Making a fervent plea not to drag him into the issue, Mr Haris said, "For the  the past nine years, I have served my  constituency with utmost humility. The law is the same for everyone and my son is no exception. We will fully cooperate with the investigation.” Appealing to the media to be considerate, Mr Haris said no one should have to undergo such an ordeal. Asked whether he had protected his son for a day, Mr Haris said he was married and could look after himself. "I cannot hold his hand in  everything. He can take his own decisions," he maintained.

In police custody...36 hours after evading arrest!
The hullabaloo over the whereabouts of Mohammad Nalpad Haris, expelled city Congress Youth Wing general secretary and son of Shanthinagar MLA, NA Haris, settled on Monday morning after he surrendered before the Cubbon Park police 36 hours after evading arrest for allegedly assaulting a 24-year-old man,  Vidvat at a restaurant in UB City.

Mohammad arrived in an autorickshaw  with an associate at around 11 am at the police station, where five of his friends, allegedly involved in the assault, were already detained. The police recorded his statement and produced him along with the six other accused before the 8th ACMM court, which remanded them to its custody till February 21. Besides Mohammad Nalpad Haris, those detained are Arun Babu, Manjunath, Mohammad Abras, Balakrishna, Abhishek and Nafi Mohammad. Another accused, Shrikrishna is reportedly absconding.

The Central Crime Branch (CCB), which is investigating the case, visited Farzi Cafe where the assault allegedly took place, on Monday  and questioned the staff. The police are also examining the CCTV footage of the cafe.

What’s the incident?
According to the complaint filed by Vidvat’s parents with the Cubbon Park police station, he and his friend, Praveen were at Farzi Cafe for dinner, when at around 11 pm  Mohammad entered and asked Vidvat  to move his leg so he could pass. Going by eyewitnesses Vidvat explained to him that he had a fracture and could not fold it, but Mohammad got into an argument with him and calling his friends, allegedly beat him up. “Around  10 to 15 people mercilessly beat up Vidvat. He was bleeding and his face was so swollen that he could hardly see.  His nose too was broken as he was attacked with bottles until he fell unconscious,”  narrated Praveen.

But the nightmare did not end there as when Praveen rushed Vidvat to Mallya Hospital,  Mohammad and his gang allegedly followed and threatened them against filing a police complaint. 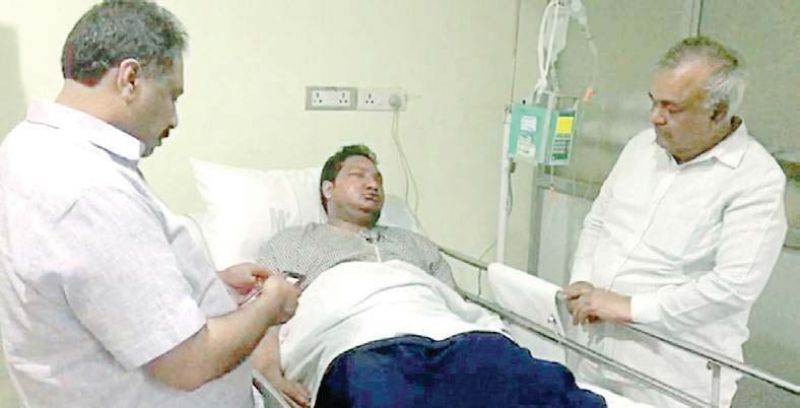 Major nasal bone fracture: hospital source
Vidwath continues to be in the ICU at Mallya Hospita and is stable but serious reveals a hospital source who adds that they cannot speak much because of patient confidentiality. "He has suffered major bone fractures and hence no surgery has been planned and as of now, he is on conservative treatment. There's a nasal bone injury and the facial swelling is so much that it will take 10-15 days for it to subside. He is still in the ICU, the injuries cannot be taken lightly," informed the hospital source.

Bodo militant groups to sign historic peace accord on Monday

Hyderabad: E-tailers too cash in on patriotic fervour