Of shrinking lakes and buck-passing babus

DECCAN CHRONICLE. | ROHAN RAMESH AND AKSHEEV THAKUR
Published Jul 19, 2017, 3:58 am IST
Updated Jul 19, 2017, 3:59 am IST
The 100-odd lakes and tanks that remain are choked with sewage, encroachments and transformed into mini landfills.

Kacharakanahalli lake, once spread out across 53-acres, bears few traces of its former glory. Now almost completely parched, the lake-bed contains packs of feral dogs, swarms with mosquitoes and is frequented by anti-social elements, with nearby residents bearing the brunt. And it isn’t the only problem area in Bengaluru. The 100-odd lakes and tanks that remain are choked with sewage, encroachments and transformed into mini landfills. There is little clarity on maintaining these water bodies, with the responsibility shared by the BDA, BBMP and KLCDA. Banning untreated sewage and allowing rainwater to enter these lakes is the only solution and could be the answer to Bengaluru’s water needs, report Rohan Ramesh and Aksheev Thakur

The Kacharakanahalli Lake, once a sylvan spread of water, is now a waste land. The 53-acre lake located between Lingarajapuram and HBR Layout, has dried up, has turned into a dump yard that appears to be beyond any sort of revival and considering its location, is being eyed by developers.

The lake is now used to dump garbage, throwaway construction material, and even as a vegetable market on Sundays! On one side, there is the Kariyanapalya residential locality that is also known as St Thomas Town and the Chandrika Soap Factory. On one side, the lake is bounded by the Hennur Main Road. On the other are two temples and a goshala run by Isckon. A slum has come up on the lake bed. Lorries that transport construction material are parked at night. There is also pre-school in the area.

At night, the area presents an eerie sight, with feral dogs scavenging for refuse, fighting turf wars, and growling menacingly at passersby.

The once-pristine water body, called ‘Silver Lake’ by the locals, is a mini Mandur, right in the heart of the city. The lake bed is being encroached, on one side by two temples. Back in 1986, the lake, already dead, was identified for an abattoir by the government, which gave up the idea in the face of fierce resistance by the residents nearby. There are plans to develop the 53 acres into a playground, parks and colleges, but all that is in the future.

According to Narayan B.S., a lake conservationist intent on developing the remaining area, “A temple has encroached the lake bed area. The case is in the court, therefore we have to wait before taking steps to recover what is left of the lake bed. Only about 15 or 20 acres remain right now.”

Right now, it is a waste dump, with a storm water drain filled with refuse running on two sides, swarms of mosquitoes, and dogs that pose a danger to the residents. There is a path from the Hennur road inside the lake, which residents actively seek to avoid after sundown, when canine attacks and mugging pose a significant threat.

Local resident Satya Murthy says that roving packs of dogs in the lake bed are pose a danger to passerbys. “Packs of feral dogs roam the area threatening residents. This is due to people dumping garbage in the lake area.”

Another resident, Mr. Davidson says there are atleast 40-50 stray dogs that have made the lake bed their home. “These strays roam the area, attracted by the smell of garbage being dumped by unconcerned citizens. Also, flies are a big problem.”

There have been instances of muggings and robberies in the area. The place is a haven for criminals hiding from police. 10 days ago, there was a shootout between police and a couple of rowdies. Police, who received information that two rowdies, Santosh and Shyam who killed their rival Ranjith, were hiding in the lakebed, confronted them.

If the government does not take steps to develop the area, there are chances of it being encroached upon by land sharks.

Right now, the area is a waste land by the day and ‘Bad Lands’ by night. The residents are still waiting for redemption.

BWSSB should treat sewage before it enters water bodies: Lake official
The extent of encroachment on the lake beds across the city, which quickly turn into dumping grounds has citizens up in arms, more determined than ever to reclaim the glory of the lakes.

However, the Karnataka Lake Conservation and Development Authority (KLCDA) claims it has custody of only four lakes but accepts that the solution to reviving the lakes is to have decentralised Sewage Treatment Plants (STP).

“The lakes are in the custody of BBMP, BDA and KLCDA which has only four lakes under its custody. The treatment of sewage must be ensured by the BWSSB,” says Seema Garg, CEO, KLCDA. 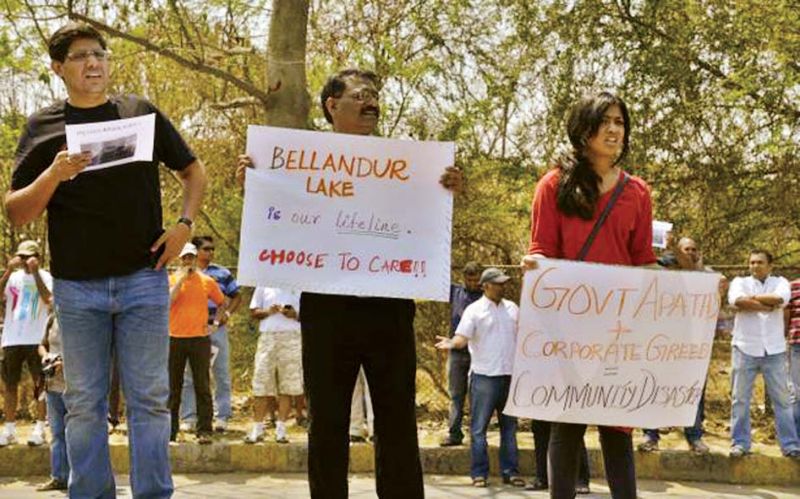 Citizens protest against the apathy shown towards Bellandur Lake

On being asked how the implementation to have STP’s in apartment complexes and IT parks can be enforced, she adds, “Karnataka State Pollution Control Board (KSPCB) has to check if various establishments have STPs or not.  The decentralised STP can solve the problems.”

Commenting on the burning issue of saving lakes, Sandeep Anirudhan, volunteer with citizen group Whitefield Rising says, “The lake authority constituted by the BBMP should be empowered. Encroachments are rampant and there is no action from the government. The moment lakes are restored, the Cauvery project becomes redundant and it will be a huge loss to those who are looking to make money.”

Speaking further on the issue of rampant encroachment, Mr N Suresh, Convener United Bengaluru says, “The committees are formed only to confuse people and to buy time. The catchment areas of lakes are encroached. Without the support of the courts, we would have become a lake less city.”

The Vibhutipura Lake is completely dried up and water expert Mr S. Vishwanath remarks, “The storm water drain bypasses the lake and stops rainwater from entering it. We must ensure treated sewage flows into the lake and for this, we must have decentralised STPs so that we can fill up the lake.”

Water expert V. Balasubramanian’s 2011 report showed thousands of lakes (or tanks) existing in and around Bengaluru city even a few decades ago. Today, the number has dwindled to under a 100. The misery caused to citizens by this rapid decline in our water bodies was exemplified in July 2016, when the flood caused by heavy rains entered homes in many parts of the city.

On the other hand, large parts of the city depend on private tankers for water, as Cauvery supply is nowhere near adequate. The reason for this sorry state of affairs is clear: The encroachment of raja kaluves and lakes by real estate mafia, an apathetic political class and officials willing to cover up discrepancies.

This trend needs to stop at once. If not, we will all live to see the last of Bengaluru’s lakes and tanks edge into extinction.

The tanks or lakes around Bengaluru were created a few hundred years ago by rulers by constructing dams across streams for irrigation and to augment water supply to Bengaluru. According to experts, if all the 1000-odd tanks are rejuvenated and the raja kaluves cleared of encroachments, 80% of Bengaluru’s drinking water needs can be met.

The fire and froth in Bellandur and Varthur lakes attracted worldwide attention from the media and gave rise to a wave of awareness that swept across the city. The clarion call by spirited leaders like H.S. Doreswamy to reclaim and save lakes indicates the seriousness of the situation before us. The time has come for citizens to take an active part in the campaign to save our lakes.