Choked by sewage: NGT lake report goes against the ‘drain’

The National Green Tribunal’s latest report on the city’s lakes has re-traced civic agency faultlines. Although the report has met with widespread approval, researchers argue that the lack of a poor sewage network, one of the principal causes of our dying lakes, has not been given due attention. However, it has  debunked the BBMP’s claims of having provided 100% UGD in CMC areas, by indicating that lakes like Ulsoor still receive sewage. While companies have reached out to rejuvenate lakes through CSR activities, other activists still caution against ‘for profit’ initiatives, reports Aksheev Thakur.

If anyone needed any more confirmation than the frothing monster that Bellandur has become about the government’s lack of interest in  returning it to its old healthy self, a commission appointed by the National Green Tribunal(NGT) recently picked several holes in its management of the Bellandur, Agara and Varthur lakes.

But while welcoming the commission’s views, some  researchers and experts believe that the NGT’s take on the subject is not entirely satisfactory either.  Dr Sharachchandra Lele, a research scholar with ATREE, says  that while the NGT believes more public STPs must be set up and commissioned within six months,  it is not possible to build such large treatment plants in such a short time. “Two years is the norm and the BWSSB has already set in motion the work on all the STPs it has committed to building. The commission also misses the point that while STPs must exist, the bigger bottleneck is the sewerage network, which takes longer to construct , especially in older parts of Bengaluru,” he notes.

The irony is that although the BWSSB claims to have acheived 100 percent UGD coverage in the jurisdiction of the City Municipal Council (CMC),  Ulsoor lake regularly receives nearly 3 MLD of sewage , the experts note.  This is also true of Kaggadasapura lake in the heart of the city, which  too receives a huge amount of sewage and has frothed much like Bellandur, they point out.

As for the immense stress placed on the entry of phosphates and nitrogen nutrients into lakes and the NGT’s insistence on an STP being set up to treat them,  ATREE researchers say this will require a proper study to determine how much of these nutrients can enter the water bodies like in the USA and Canada, where each state has a different criteria based on the temperature and weather.
Says Dr Priyanka Jamwal, a researcher at ATREE said, “There should be a limit on the entry of nitrogen going into the lack, but a study needs to be done on that. At Jakkur lake, the STP removes nitrogen and not phosphates. However, constructed wetlands take care of the eutrophication of lakes.”

Also while the NGT commission points out that the construction of the road on the Varthur lake bed has compromised its ecology and integrity, some researchers regret that it has failed to realize that the entire project to divert treated water  to Kolar is illegal as it does not have environmental clearance.
The researchers also lament that  the government has not spent a  penny on studying the dying ecology of city lakes and it is left to institutes like ATREE and the Indian Institute of Science to look into the problems afflicting these water bodies..

Dr Veena Srinivasan, an ATREE scholar ,notes that unlike abroad where research grants are given to academic institutions, in India the government bodies control the narrative if they do. “Here, the BWSSB  would expect the independent bodies to toe its line if it fund the research,” she observes sadly.

Not a drop of clean water in Bellandur lake: report
After an almost circumferential tour of the lake, the Commission further observed that there is not even one milliliter of clean water in the lake, but the same was filled up with sewage, effluents, solid waste, weed, debris- NGT COMMISSION REPORT. Lakes falling under the CMC area receive sewage. 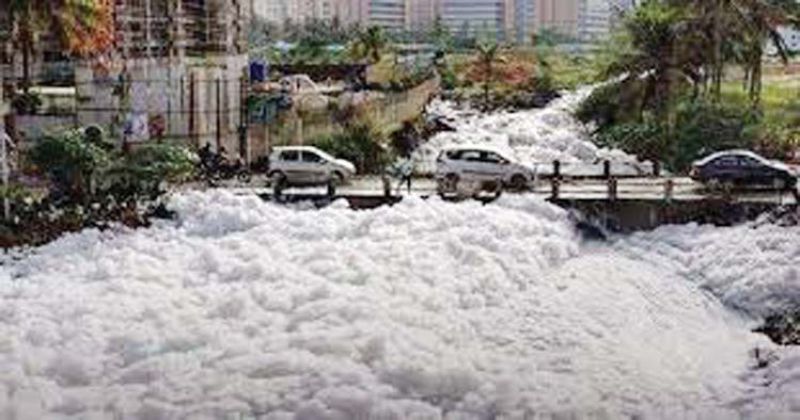 The Deputy CM, Mr G Parameshwara has recently announced the setting up of an STP at Kaggadasapura lake. As per lISC report total sewage entering into Varthur lake is 590 MLD out of which 560 MLD entering through the inlet from Ammanikere and 30 MLD from peripheral water influex region. Bellandur lake receives about 480 to 500 MLD of treated and untreated sewage.

KLCDA should be in charge: IISc scientist
Lead scientist of the Indian Institute of Science,  Dr TV Ramachandra believes the Karnataka Lake Conservation and Development Authority (KLCDA) should be given the responsibility of cleaning up Bellandur lake.

“ I want the current government to immediately amend the KLCDA Act and task it with the job of rejuvenating Bellandur lake. The BDA should not have been asked to rejuvenate it at all,” he says.

On the issue of handing over sick water bodies to private companies for a makeover using their Corporate Social Responponsibility (CSR) funds, Mr Kshitij Urs, a founder member of the People’s Campaign for Right to Water, points to the NK Patil report , which warns that any rejuvenation work for profit will only end up burdening lakes. “If the companies provide funds to rejuventate the lakes without expecting to make any profit, then there is no issue,” he says.

But dispelling such apprehensions, Mr Manish, CEO of United Way Bengaluru, that has partnered with companies like Amazon and Dell to rejuvenate  lakes, says his experience has always been positive.

“While the BBMP lake team is very efficient, given the fact that it has financial constraints, a lot of companies come forward to pitch in with funds. The companies that we have partnered with have always sent 100 per cent treated water into the lakes and did not do anything for profit,” he maintains.

But Dr Ramachandra cautions against too much beautification of lakes , saying that concretisation of the area around them can only lead to ecological disaster in the long term.

COVID-19: Complete lockdown in Kerala from July 31 to Aug 1

WHO assessing Covaxin data for EUL; Decision date 'to be confirmed'