India’s first women fighter pilots, Mohana Singh, Avani Chaturvedi and Bhawana Kanth, who were inducted into the Indian Air Force on Saturday pose for a photograph during their Combined Graduation Parade at the Air Force Academy in Hyderabad. (Photo — PTI)

Hyderabad: The Indian Air Force created history on Saturday by inducting three women as fighter pilots. The three, Avani Chaturvedi, Bhawana Kanth and Mohana Singh, were formally commissioned by defence minister Manohar Parrikar at the passing out parade at the Indian Air Force Academy in Dundigal.

On the occasion, Mr Parrikar said that induction of three women officials in combat roles was a milestone and a step towards creating gender parity in the armed forces. “It is a golden letter day. This should open up opportunities for more and more women in the force,” he said.

Forces will slowly get more women
Indicating that more women would be inducted in combat roles in other wings of the armed forces, Mr Parikkar said that the forces needed to build more gender-friendly facilities to accommodate woman.

“There are technical and administrative difficulties which we are likely to face in certain areas. The numbers will depend on how many we can accommodate depending on our infrastructure,” he said. 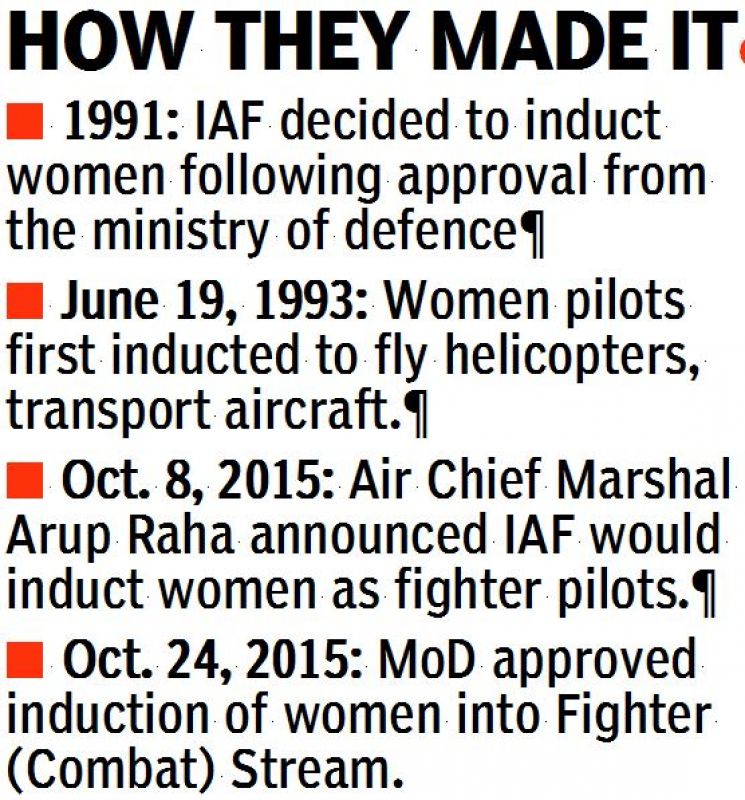 Elaborating on the limited infrastructure for women, Mr Parrikar said, “For example, our submarines have to be designed to accommodate both genders because space availability is very less. In combat ships too, similar difficulties exist.”

Answering a question on whether women would be pressed into actual combat roles and missions, the minister said, “If women of the armed forces in the Gulf countries can be engaged in offensive roles, I do not see why our forces should not have women officers in combat roles.”

The defence minister said that by next year, the women officers would complete their advanced training and would be able to fly fighter jets like Sukhoi and Tejas. Senior Air Force officials said that six female cadets had competed to become fighter pilots and three female trainees were selected for the fighter stream.

Mr Parrikar, who reviewed the passing out parade, conferred the President's Commission on behalf of the President on 130 Flight Cadets, including 22 women trainees, who were commissioned as Flying Officers.

During the passing out parade, spectacular aerobatics of the pilots enthralled the audience at the Air Force Academy Ground. SU-30 pilots and Sarang, the helicopter aerobatics team, and pilots of PC 7 MK-II of the IAF displayed breathtaking stunts.

3 MLAs of AP get infected with Coronavirus

Day after Uddhav's resignation, BJP to hold meetings to decide next course of action