The spectacle of Ethiopian marathon runner, Mulle Wasihun being attacked by a stray dog during the TCS World 10K marathon in the city, went viral as the world media picked it up at the international event, bringing shame to Bengaluru, India’s silicon valley.

Bengaluru made global news when a stray dog chased Ethiopian marathon runner, Mulle Wasihun at the TCS World 10k. The BBMP has earmarked Rs 2.5 crore for the spaying programme, which, quite clearly has proved ineffective. Officials, quick to pass the buck, say NGOs are not interested in adopting the programme within the city limits, because of the traffic conditions. Also, dog lovers and activists have objections of their own, further impeding the programme.

Bengalureans have lived with the problem of stray dogs for years and now the world is aware of it too. The spectacle of Ethiopian marathon runner, Mulle Wasihun being attacked by a stray dog during the TCS World 10K marathon in the city, went viral as the world media picked it up at the international event, bringing shame to Bengaluru, India’s silicon valley. “Bengaluru’s reputation  has been put at stake both by the garbage on its streets and its stray dogs. The problems are linked and still not solved,”  rues Ms Diana Bharucha of Stray Dog- Free Bengaluru (SDFB).

Stray dogs attacking sportspersons is not new to Bengaluru as they have harassed players at football grounds in the past. Worse, they stray on to the runway at the city airport, endangering flights preparing for take-off. This time, however, thanks to Mulle’s plight, the world has seen how severe the problem really.  Activists have cried hoarse about the need to control the stray dog menace, but as long as the city fails to tackle its garbage problem , the strays are not going anywhere in a hurry either.  Ms Bharucha has a solution,however. 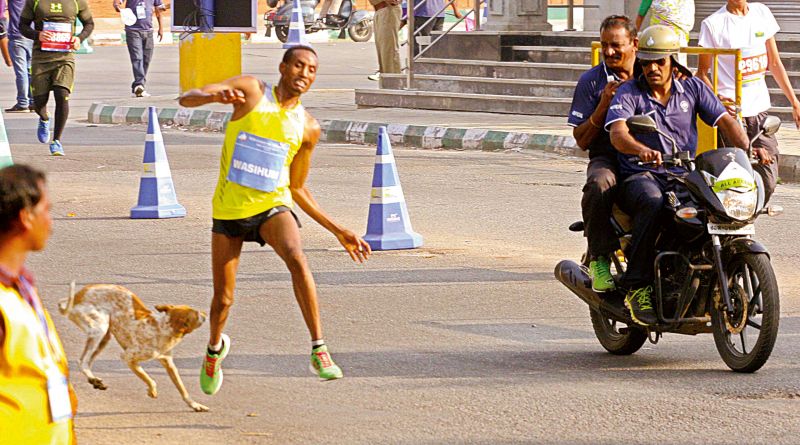 “Most  members of SDFB have pets at home. We are all animal lovers and all  we want is responsible pet ownership. Those stray dogs, which cannot be kept in dog pounds or  looked after by animal welfare NGOs must be euthanised as is done in all developed countries of the world,” she says, pointing out that even by World Health Organisation standards only 80 per cent of the dogs can be caught and neutered or sterilised. “The BBMP must intensify the Animal Birth Control (ABC) programme to achieve 100 per cent results. But it is doing too little too late and as a result many in the city are  being bitten by the strays,” she regrets. Pointing out that cases of dog bite increase during the mating season and bitches are more aggressive after delivery of puppies, activists stress that improved sterilisation of dogs  can prove a huge deterrent. 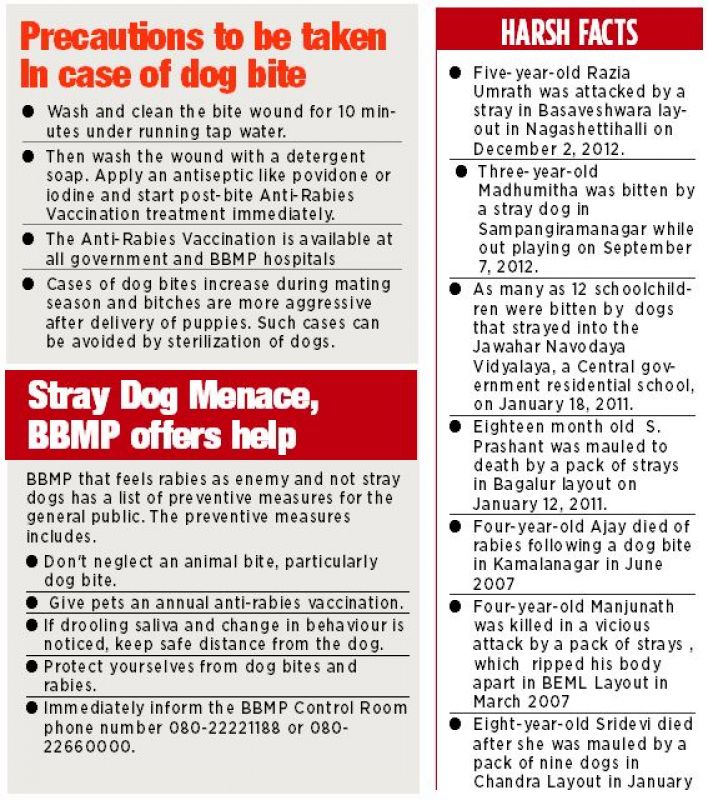 Dog licensing and penalty for poop on roads
The Bruhat Bengaluru Mahanagara Palike (BBMP) has proposed new rules under its draft by-law for pet dog licensing and a penalty for owners who fail to scoop up their pets' poop from city roads. The new rule restricts people from having more than three dogs in an independent house and more than one in a flat. The draft by-laws, framed under section 344 of the Karnataka Municipal Corporation Act, 1976, say the owners must have a pet license and imposes a fine of Rs 1, 000 for violations. A penalty of Rs 100 is imposed on owners of  dog if they fail to scoop up the poop from roads.

Spaying is expensive, can cause infections
As the stray dogs on city streets continue to multiply, the BBMP which sterilises them with the help of local NGOs, has the option of either going in for the Catch-Neuter-Vaccinate-Release (CNVR) process to sterilise dogs or follow the traditional method to achieve the same result.

Mr Vinay Moray of Sarvodaya Sevabhavi Samstha believes both CNVR and the traditional method have their pros and cons. “CNVR is a process in which both the male and female stray dog are captured and sterilised and then released at the same location where they are picked up from. During the process of sterilisation, the dogs are given a strong painkiller that works for nearly 48 hours. By using CNVR  it is possible to sterilise about 20 to 25 male and female stray dogs every day. But this process is not popular with the Animal Welfare Board of India (AWBI) as a dog suffered a painful death as a result of it in Kengeri,” he explains.

“In the traditional method the sterilisation process for the male stray dog takes three days and seven days for a female stray. It also makes the chances of Canine Distemper, Parvo virus and other viruses spreading to other dogs greater. Only about 10 to 15 dogs can be sterilised in a day using this  method,” he adds. The CNVR process is also expensive, costing Rs 1,300 per dog. This covers cost of transporting the dog, medication and fee of the vet involved.

NGOs serving for the BBMP

Prevention of Cruelty to Animals Act
Under the Animal Birth Control (Dogs) Rules stray dogs must be sterilised and immunised and then returned to the very location from where they are picked up from. 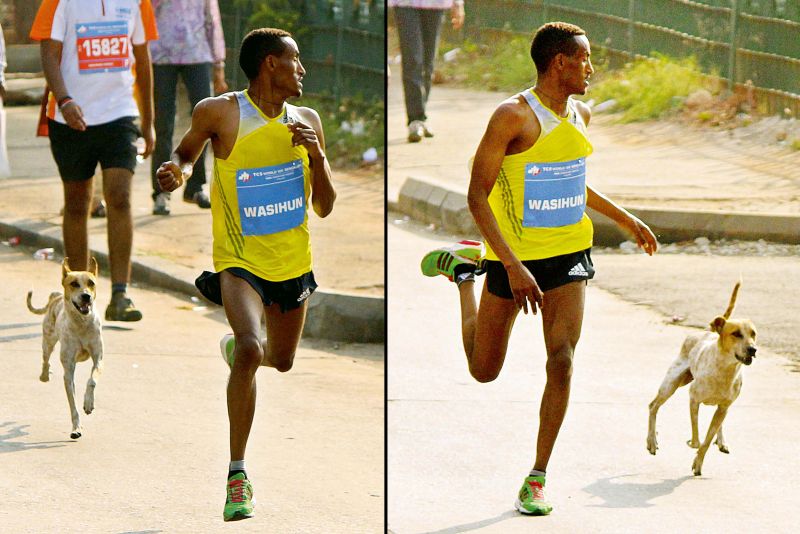 How was a stray dog allowed to enter the marathon track in the city?
Usually when such mega events involving VVIPs and delegates are held in the city, the BBMP is informed and if the dog catching squad is allowed to make rounds of the venue,  the strays do not cause a nuisance. But sadly, the BBMP was not informed about the event this time.

Why is the Animal Birth Control (ABC) programme going so slow?
The BBMP has been using the CNVR method to neuter dogs and release them the same day after surgery. But some animal lovers want the dogs to be kept under observation for at least 48 hours afterwards. As not all the NGOs have this kind of facility, the ABC programme has been forced to slow down.

Is there a funds constraint?
No, we are not short of funds. However, there is a lukewarm response from NGOs to the ABC programme as it has now been taken up nationwide. They are not interested in the city any more, given the traffic conditions here.