General Narsamma and Algole Narsamma interviewing residents of a village for their radio shows. V. Sadanandam focuses on corruption and police harassment and Narsimha Reddy reports on farmers’ distress.

Hyderabad: Every evening, radio listeners across 200 villages in Machnoor of Zaheerabad tune in not into entertainment and news channels but to their own radio stars between 7 pm and 9 pm to get their daily dose of information, local news and yes, even gossip. 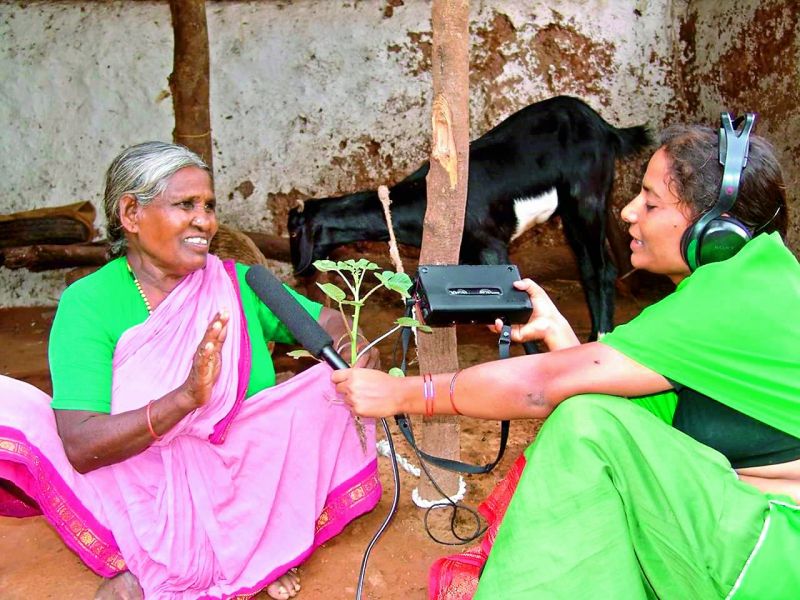 General Narsamma and Algole Narsamma, in their mid-thirties, are the district’s official citizen-turned-radio jockeys, operating from a studio and broadcasting in an area covering a radius of 30 km.

General Narsma is the senior of the two, and got the title because she was intelligent and showed leadership qualities at a young age.

Having studied till Class 10 in Telugu medium from a government school and no degree in journalism, the duo suits the definition of citizen-turned-journalist, bringing local news from rural pockets of Zaheerabad, which the mainstream media does not cover.

The primary focus is on organic cultivation and millets-based biodiversity owing to the soil that supports millets locally. District reporters and contributors of mainstream media listen in and pick up stories from what General Narsamma and Algole Narsamma cover.

Ms Algole Narsamma said, “A large number of farmers suffer from diabetes and arthritis. Those with Aarogyasri get themselves treated at local hospitals, but we promote traditional medicine through our radio channel for those having no help. Our reports are heard in shops, homes , hotels. Every day we have spate of phone calls. We cannot answer all of them because we do not have the staff.”

Reporting from Dharmaram in Kaimnagar is a young farmer, ‘Reddysaab’, who raises issues through grassroot on-ground reporting. Mr Narsimha Reddy, 28, armed only with a smartphone and gumption is trying his best to help youth who have left Dharmaram in Karimnagar as they don’t deem agriculture as a high earning profession.

“The media covers the distress of the farmers and highlights the losses, which is important. But there is another face to farming. I earned `1 lakh in four months which is decent enough to support my family. Through my videos, I convince youngsters to take up farming. In the Assembly election, I highlighted the pro and cons of being a farmer and encouraged a few to contest.”

Reddysaab  creates videos on farms, agricultural production and means to encourage cultivation as a viable profession. “Many local newspapers have picked up my stories. I have contributed to news channels,” said Reddysaab, a graduate in computer science. He is also working as an art director for a short film.

Among those who have harnessed social media is Hyderabad-based Khwaja Moinuddin, an MBA graduate who quit his job with a vision to feed the hungry. He has become a Youtube star with over 7 million subscribers. Mr Moinuddin cooks and feeds the hungry, he has been able to provide food to 1,200 orphans in a single month. His kitchen serves biryani, dum ka chicken and Nizami cuisine is open for all.

In Husnabad, Mr Veladandi Sadanandam runs a pan shop for a living but what drives him is his passion to report. Sadanandam moves around the town in Siddipet district and captures news in places where no TV channel or paper reaches. He has contributed many videos, some of which have gone viral.

“I focus on police harassment against citizens and corruption in government offices. I shot a video where an accused was made to parade with handcuffs on the road while the police were taking him to a court. The video went viral but I was asked by the top cop to delete it,” he said.

Their services, and those of others like them in towns and villages across India came for praise from senior journalist P. Arihant, who took to Twitter to speak about the silent revolution happening in the media fraternity.

Mr Arihant wrote: “These ‘citizens turned journalists’ have become mini district/state-level celebrities and have 1,000s of subscribers. These channels are filling a great void in media. For now, they are focusing on bringing election-related coverage.

What is amazing is local politicians, MLAs, MPs are ready to give interviews to these new journos given the great reach of these channels among masses. Out of these scores of untrained journalists emerging from each n every corner of India, some will become big. Many may take professional courses to hone their skills. Others may learn by doing. No suppressing talent now. And not just in media. In every field. Great for India (sic),” he said in a series of tweets.