Garment workers' protest: It was the IT hub’s sheen that was torn asunder

A few men from the Shahi Exports Unit No. 14 started vandalising vehicles which turned the situation awry.

Monday’s protests by garment factory workers should not have come as a surprise. It’s been a tinderbox waiting to explode for years as these factories are not much better than slave labour camps, employing mostly women. The agitation over the Centre’s new rules on provident fund withdrawal was just the trigger. That the protests caught the police and the government unawares is sad commentary on the authorities, who witness every day the conditions under which these women function. Unfortunately, it was the well-heeled of the IT hub that were caught in the cross-fire, knocking Brand Bengaluru down a notch.

It was a nightmare on Hosur Road for thousands of techies on Monday. Returning to work after the weekend, thousands were left stranded on it for nearly four hours as agitating garment factory workers held the IT hub to ransom. Employees of Infosys, Biocon, Wipro, HP and others were the worst hit with traffic coming to a grinding halt on the road and  the BMTC  withdrawing its services to Electronics City as a result.  Private buses too gave Hosur Road a miss owing to the traffic hold-up, worsening their plight.

Many commuters were taken unawares by the BMTC’s decision to withdraw its services  to Hosur Road at 11 am and reached their offices and elsewhere late by several hours after waiting for them inordinately.

Recounting her experience , Ankita (name changed), an Infosys employee, who reached her office over two hours late, said, “Like everyday, I reached K.R Market by 12 pm so I could take a bus and get to  office by 1.30 pm. But even after an hour, there were no buses to Electronic City or  Hosur Road. So I finally took a bus to NIMHANS and an auto to Bommanhalli from where  I took  a private bus to Singasandra and then walked to office. It was 4 pm by then.”

For those who managed to reach Hosur Road, it was a herculean task  getting to their offices from Madiwala. Although it is a mere 6 km from Madiwala to Singasandra, it  took them nothing less than two hours to make the journey. Techie Sushma Rao, who was in an autorickshaw,  said the hold-up was so bad at Madiwala Junction, that vehicles did not move an inch even after 45 minutes. “ I called my colleagues who picked me from Central Silk Board and we took two hours from Bommanhalli to reach office,” she said.

Many IT employees took  to Facebook, Twitter and other social networking sites to warn their colleagues and friends about the traffic hold -up, but in many cases they were too late . While some companies decided to send their employees home, they were  of no help otherwise.

“There was anger and frustration among the employees in the offices and log -in hours were not really given importance for the day. But there should have been an official communication asking us to go back home or simply alerting us to the situation. Like the police, we too were caught off-guard,”  complained a fed up techie,  Sudhanshu.

Police’s lack of alertness worsened the mayhem
The police’s unpreparedness in the face of 10,000 garment factory workers hitting the roads and the decision of many IT firms to send their employees home in view of the situation, added to the mess on the roads. As employees of IT firms and other private companies returned home, they only added to the traffic flow on the national highway,  leading to more chaos and traffic  pile- ups.

As the hours went by all major junctions, flyovers and even footpaths looked more like parking lots in the area. Many blamed the police for not taking enough precautions, pointing out that  it should have stopped the huge crowd of garment factory workers from gathering on the road when they first started to assemble at 9 am.  “The traffic police should have also sent alerts to people, warning them against going to Hosur Road. But it did not . The transport department too did not alert anyone about withdrawing its services Hosur Road,” complained several of those stranded.

‘We are treated like slaves, not workers’
“We are mostly slaves and less workers,” says Anjali (name changed), amid all the chaos that goes on behind her. Her colleagues have taken it to the streets to vent their anger, the police are ruthlessly charging at people, irrespective of the gender, and Anjali is shaken to bits. “I have been working for over a year and the situation is too overwhelming,” she gathers courage to say. Explaining the working conditions at factories, she says, “We are told to work in shifts, which is officially eight hours, but the work hours stretch to over 10. We are not paid for any of the extra hours we slog. On some occasions, the supervisors take away our punch cards and lock the doors. As per records, we have left for the day, but in reality, we will be doing the extra work.”

Neelam, another factory worker, is quick to point out, “What about the basic amenities? We have to think twice before using toilets as they stink and are never cleaned. We cannot even share our problems or file complaints as there is no union or platform.” Many workers said that their children received education only from the money they earned and if the government was inconsiderate to their demands, they had no choice but to protest. 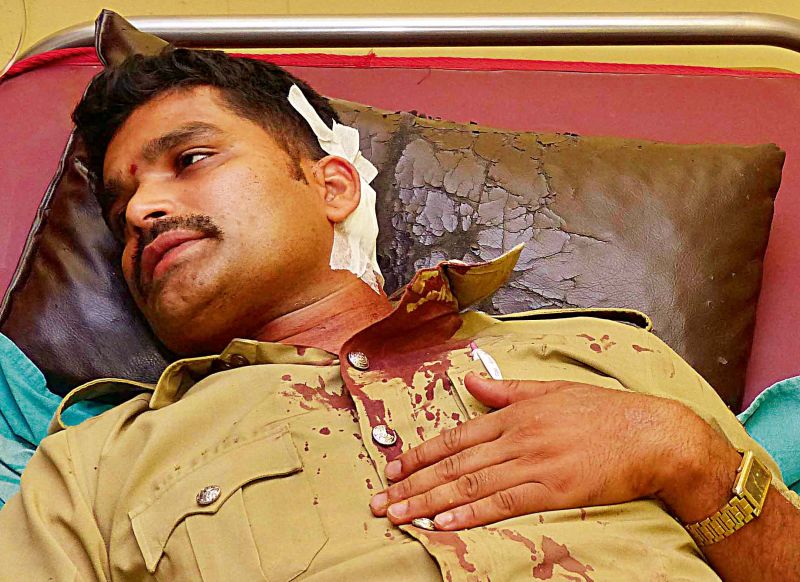 Protectors pay price for the protest
City police top brass, including the commissioner, N.S. Megharikh, rushed to Bommanahalli junction and the EPF office. Deputy Police Commissioners of all divisions were also called in to handle the crisis. Additional Commissioner of Police P. Harisekaran was also at the spot when the situation turned violent. Mr Harisekaran sustained a gash in his hand, while a dozen policemen, including senior police officers, were injured. Among the injured are Victor Simon and Nagaraj, police inspectors, Narendra K.S., Ravi Kumar, Bhaskar, Shivanna and Revanna, constables, and few other police officers. They were given first-aid as the injuries were minor.

No IPS officer for traffic
Ever since Mr M.A. Saleem has been posted to the Lokayukta, the Additional Commissioner (Law & Order) has been managing the additional charge of traffic also. It is important that in a city like Bengaluru, a dedicated IPS officer, who knows the ins and outs of traffic, handled traffic exclusively, said experts.

A few men from the Shahi Exports Unit No. 14 started vandalising vehicles which turned the situation awry, said Sadiq Pasha, a resident of Bommanahalli for over 40 years. “It was a frenzied gathering without leadership. We are ready to accept any memorandum from an organised group, be it any kind of demands. We tried to convince them that their PF money is safe and it will go nowhere, but they were not pacified,” said Amardip Mishra, Regional Provident Fund Commissioner.

Commuters got different versions
Not all protesters were aware of the reason behind the agitation. One said it was for water supply, while another said it was for garbage clearance. One of them got it right and said it was for provident fund changes, but was not sure what exactly. Some of them even said that they were demanding a raise in wages.
Commercial establishments near the Bommanahalli junction downed their shutters immediately after the situation turned violent. A few workers were seen forcing business establishments along Hosur Road to shut down. 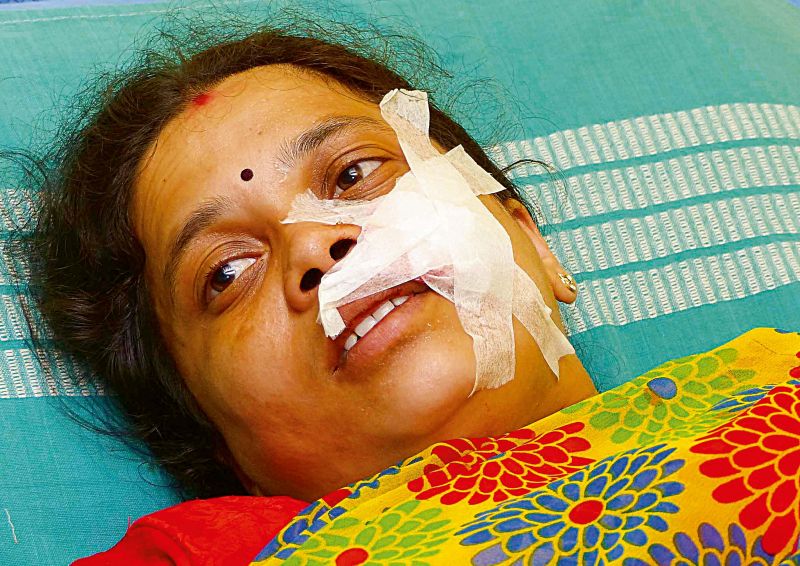 Women workers fall prey
Around 10-15 women workers sustained injuries. Four of them were admitted to Prashantha Hospital in Bommanahalli junction. “I cannot recall what happened after the police started lathi-charge. All the people ran helter-skelter. A stone fell from the terrace and hit my face and I fell to the ground,” said 28-year-old Pavithra who was one of the agitators. There were women agitators too hurling stones at the policemen, an SI said.