The erstwhile AP government in an affidavit filed before the Supreme Court in 2012 had stated that about 496 old structures in Hyderabad have a high potential of creating a law and order problem.

Hyderabad: Local political interests and ‘religious sentiments’ are standing in the way of removal of religious structures on public roads in Hyderabad, Vijayawada and Visakhapatnam in both Telugu states, even though a Supreme Court order has directed their removal. In September 2009, the apex court had ruled that no unauthorised construction shall be permitted in the name of temple, church, mosque or gurdwara on public streets, public parks or other public places. In January 2010, the Supreme Court banned fresh encroachment of roads, pavements and sidewalks by constructing religious structures or installing statues of public figures.

While imposing the ban on religious structures and statues on roads, a two-member bench comprising Justices Dalveer Bhandari and K.S. Radhakrishnan had directed the states and the Union territories to formulate a comprehensive policy and to identify all unauthorised structures and spell out within what period of time these would be demolish-ed/relocated/regulari-sed. The top court of the country has time and again been cautioning the chief secretaries of all states that contempt of court proceedings would be initiated against them for failing to remove/prevent illegal religious structures and statues from roads. The apex court had observed that “construction of temples and mosques near drains and kiosks selling tobacco products is an insult to the god. This is not due to faith but because people want to make money. The states must remove them.”

With regard to constructions of a religious natu-re that already existed, the Supreme Court has ordered the state administration to review these on a case-to-case basis and take appropriate action. The authorities concerned in AP and Telangana have been struggling to remove unauthorised structures from roads and preventing new ones from coming up, but local political leaders obstruct them whenever they attempt to remove these structures. There are about 647 temples, mosques and churches in the middle of roads in the Greater Hyderabad Municipal Corporation’s jurisdiction, and 114 other religious structures such as chillas and graveyards. 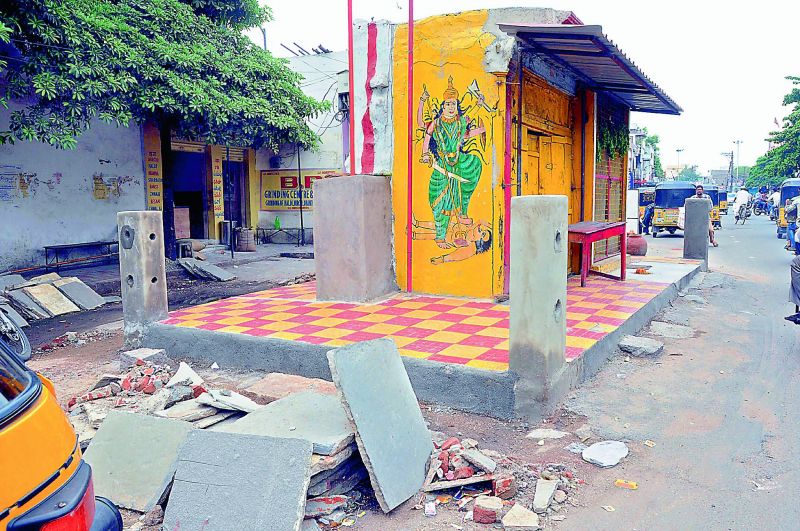 Construction work of Shamsheergunj Durga temple was put on hold after complaints were filed. (Photo: DC)

A total of 357 road stretches have been encroached upon in this manner. There are 24 such structures in and around Vijayawada city in Andhra Pradesh. Political pressure agai-nst removing religious structures has meant that the GHMC and the roads and buildings department have often been forced to change the alignment of a road. At Kothaguda crossroad near Hitec City, a dargah and a temple, located on both sides of the road,  are causing severe hardship to commuters every day.  When the road was to be widened, the authorities attempted to relocate the two structures, but could not do so. 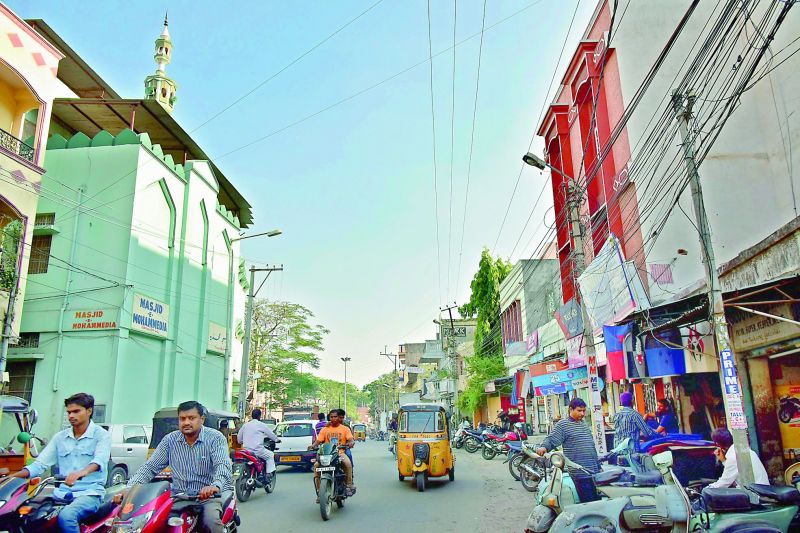 A mosque at Gudimalkapur in the middle of the road causing inconvenience to people. (Photo: DC)

The same was the case when it came to relocating the temple opposite to Khairatabad circle office, and the temples near Visvesvaraya Bhavan to accommodate the Metro Rail.  Several religious structures located on the road from Darulshifa to Moghulpura obstructed work on Metro Rail in the Old City. In 2010, the GHMC had filed an affidavit in the Hyderabad High Court, stating that it would remove the structures in a phased manner, but it is yet to do so. B. Janardhan Reddy, GHMC Commissioner, said that the corporation requires time to convince people to agree to the relocation of the structures.

No end to woes of Gandhi: Now ward boys join nurses on strike

All our borders are safe: ITBP and BSF DG on Ladakh standoff