Bengaluru: Karnataka Chief Minister H D Kumaraswamy on Thursday moved the confidence motion in the state Assembly with the 14-month old Congress-JD(S) government headed by him hanging by a thread after a rebellion by a section of ruling coalition lawmakers.

Ahead of the floor test, BJP leader BS Yeddyurappa expressed confidence that the coalition government would fall on Thursday.

The Assembly began debate on the trust vote on Thursday.

06:25 pm: Adjourned for the day. BJP MLAs to sit on an overnight "dharna" demanding that the Speaker heeds the Governor's letter and holds the floor test today.

05:48 pm: Congress MLAs protest in Karnataka Assembly with pictures of its MLA Shrimant Patil, who had gone incommunicado & was later found to be admitted at a hospital in Mumbai. Congress has accused BJP of poaching its MLAs.

Bengaluru: Congress MLAs protest in Karnataka Assembly with pictures of its MLA Shrimant Patil, who had gone incommunicado & was later found to be admitted at a hospital in Mumbai. Congress has accused BJP of poaching its MLAs pic.twitter.com/sU9IVRmIBJ

05:18 pm: Karnataka BJP chief BS Yeddyurappa in the assembly said, "Even if it is 12 midnight, let the trust vote be held today."

05:10 pm: Karnataka Governor has said to the Assembly Speaker: "Motion of confidence is in consideration at the house. Chief Minister is expected to maintain confidence of the house at all times. Consider trust vote by the end of the day."

04:22 pm: Jagadish Shettar of the BJP said, "CM had fixed today for vote of confidence but when the motion was moved & debate started, Siddaramaiah, Krishna Byre Gowda, & HK Patil moved point of orders. We have requested Governor to direct the Speaker to continue the debate on vote of confidence."

03:47 pm: Karnataka Speaker KR Ramesh Kumar during trust vote debate asked Assembly: “What kind of a Speaker I would be if I proceed with document (letter sent by Congress MLA Shrimant Patil informing about his ill health) which has no date or letterhead.”

“Please contact the family members of Shrimant Patil (Congress MLA) immediately. Give a detailed report to me by tomorrow, it does not look natural. If Home Minister can't ensure protection, I will talk to DGP,” he added.

03: 45 pm: Karnataka Congress President Dinesh Gundu Rao said, “There was hospital right next to resort where our MLAs are staying, then why was he (MLA Shrimant Patil) flown to Chennai and then to Mumbai for treatment? He is healthy, nothing is wrong with him. It's a conspiracy by BJP.” 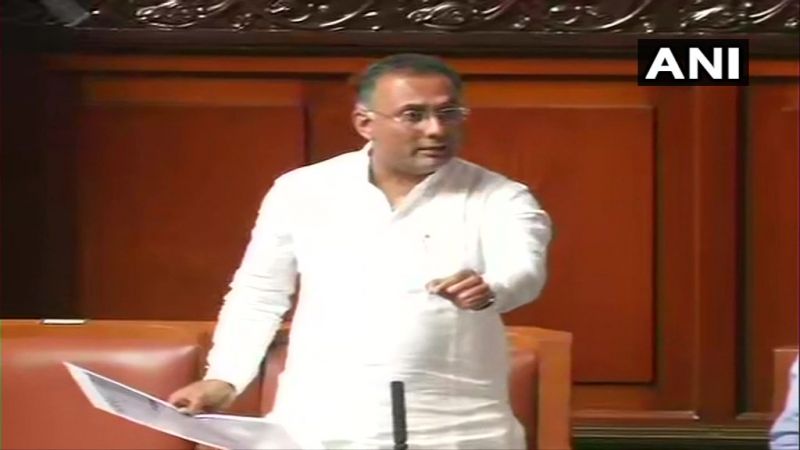 03:25 pm: DK Shivakumar, Congress in Karnataka Assembly said, “There were 8 MLAs who travelled together, here is a picture of one of them (Shrimant Patil) lying inert on a stretcher, where are these people? I'm asking the Speaker to protect our MLAs."

DK Shivakumar, Congress in Karnataka Assembly says, "There were 8 MLAs who traveled together, here is a picture of one of them (Shrimant Patil) lying inert on a stretcher, where are these people? I'm asking the Speaker to protect our MLAs." Uproar in the house after this. pic.twitter.com/08ugj0XuiM

01:50 pm: Siddaramaiah added, “If we go ahead with the confidence motion, if the whip applicable and they (rebel MLAs) don't come to the house because of the SC order, it will be a big loss to the coalition government.”

01:45 pm: Congress leader Siddaramaiah said, “Till we get clarification on Supreme Court's previous order, it is not appropriate to take floor test in this session which is against the Constitution.”

01:27 pm: DK Shivakumar said, “Being a former Chief Minister, being the leader of opposition, he (BS Yeddyurappa) is misguiding the nation, misguiding the court.”

12:37 pm: Karnataka Speaker in Assembly: "When a member chooses not to come, our attendants will not permit them to sign the register of attendance. The concerned member will not be entitled to draw any emolument that is meant for the member to be drawn for being present in the House."

12:35 pm: Karnataka Speaker said, “This House holds Supreme Court in highest esteem. Let me make it clear to leader of Congress Legislature Party that this Office is not restraining you from exercising any of your authorities. I've no role to play in that.”

12:17 pm: Kumaraswamy said, “I have self respect and so do my ministers. I have to make some clarifications. Who is responsible for destabilising this government?”

11:50 am: Debate underway in Karnataka Assembly on trust vote.

11:43 am: As Kumaraswamy moves the motion, opposition BJP leader B S Yeddyurappa said the confidence vote process should be completed in a single day, reports news agency PTI.

11:35 am: N Mahesh, BSP MLA is not present in the House during trust motion, reported ANI.

11: 27 am: Karnataka CM HD Kumaraswamy in Vidhana Soudha, Bengaluru said, “I haven't come just because there is a question on whether I can run a coalition government or not. Events have shown that even the role of the Speaker has been put under jeopardy by some legislators.”

11:18 am: The Karnataka Legislative Assembly has convened. BS Yeddyurappa seeking a discussion on the trust vote motion. 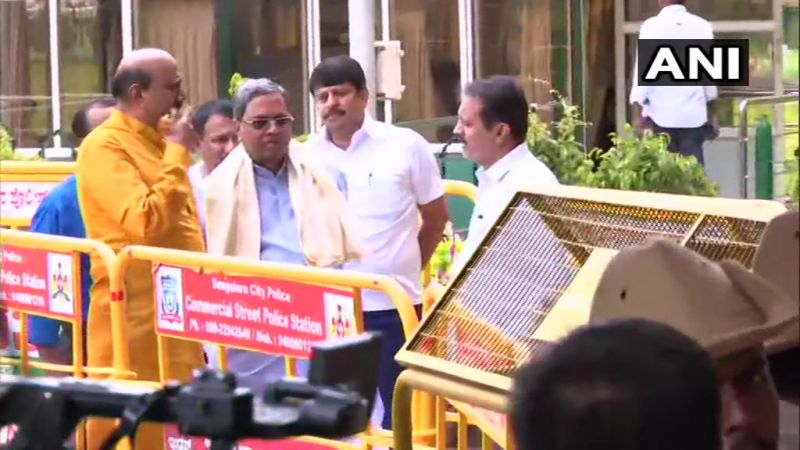 As many as 16 MLAs -- 13 from the Congress and three from JDS -- have resigned, while independent MLAs R Shankar and H Nagesh have withdrawn their support to the coalition government, putting the Kumaraswamy-led government in jitters.

A day ahead of the trust vote, senior Congress lawmaker Ramalinga Reddy said he would withdraw his resignation, giving some relief to the ruling coalition.

The ruling coalition's strength in the House is 117-- Congress 78, JD(S) 37, BSP 1, and nominated 1, besides the Speaker. With the support of the two independents, the opposition BJP has 107 MLAs in the 225-member House, including the nominated MLA and Speaker.

If the resignations of the 15 MLAs (12 from Congress and 3 from JDS) are accepted, the ruling coalition's tally will plummet to 101, (excluding speaker) reducing the 14 month-old Kumaraswamy government to a minority.