Sunday story: Tired of the water crisis? Ancient Kamalapura proves there are answers

Revenue department records say the tank is spread across 476 acres and irrigates around 1,500 acres throughout the year, enabling farmers to reap a good harvest of paddy, sugarcane and banana crops.

There was an age when the rivers flowed clean and free, when the tanks and lakes in Karnataka were brimming with glistening water and when there were no droughts and water shortage. Those were the times of the Vijayanagar empire, when the 15th century kings made sure their subjects never went thirsty in the searing heat and had enough water to farm their fields and reap a bountiful harvest.

The glorious age has gone and all that remains are crumbling inscriptions and plaques to remind us of the wisdom of the ancient rulers, who knew that the welfare of their people started with providing them something as basic as water. An inscription dating back to the Vijayanagar period, recounts how a mother tells her kid, “Kereyum kattisu, baviyum savesu, devagaram madi, sajjereyolu silukida anatharannu rakshisu” (build tanks, dig wells, make temples and protect those orphans/slaves caught in the vicious circle).

Building a tank was as sacred as worshipping the gods which was why the Vijayanagar kings gave prime importance to constructing anicuts and tanks across their empire.

What worked to their advantage was the fact that Hampi, the erstwhile capital city of the empire, was located in the natural basin formed by river Tungabhadra, which flows in a north-easterly direction. Many embankments were built along the streams to create reservoirs of different sizes. Since Vijayanagar was one of the most arid zones in the peninsula, perfect arrangements were made to store rainwater to be used in the city.

Kamalapura tank is the best example of such a tank, built in the early years of the fifteenth century. Water from this tank was used not only for irrigating fields but was also sent through a channel to the 'royal centre.' According to folklore, the tank was built by Bharamappa Nayaka, who even sacrificed his pregnant wife Bhageerathi to prevent the tank from bursting when it was being  constructed.

Historians say that the tank was later developed by Vijayanagar king and the greatest of the Sangama dynasty rulers, Devaraya II or Prouda Devaraya (1425-1446 CE) who named it after his principal queen, Kamala Devi.

Kamalapura is an apt example of how expertise in hydraulics can be put to use to make optimum use of water for drinking and irrigation. Revenue department records say the tank is spread across 476 acres and irrigates around 1,500 acres throughout the year, enabling farmers to reap a good harvest of paddy, sugarcane and banana crops.

Another inscription dating back to 1541, found in Hampi, describes Kamalapura as ‘the big and never drying tank of this suburb’. Modern rulers, however, do not seem to have any inking of how to preserve the famed tank, which comes under the core area of the Hampi World Heritage Area Management Authority (HWHAMA). Result:  there are encroachments all across the tank bed, heavy silt deposits and unauthorised agricultural fields, reducing the tank to a shadow of its original self.

The first major threat is 200 acres of unauthorised cultivation, followed by accumulation of silt, diversion of natural streams feeding rainwater to the tank, and construction of a tarred road on the tank bund. These roads pose a serious threat to ancient sluices supplying water to agriculture fields in the catchment area. 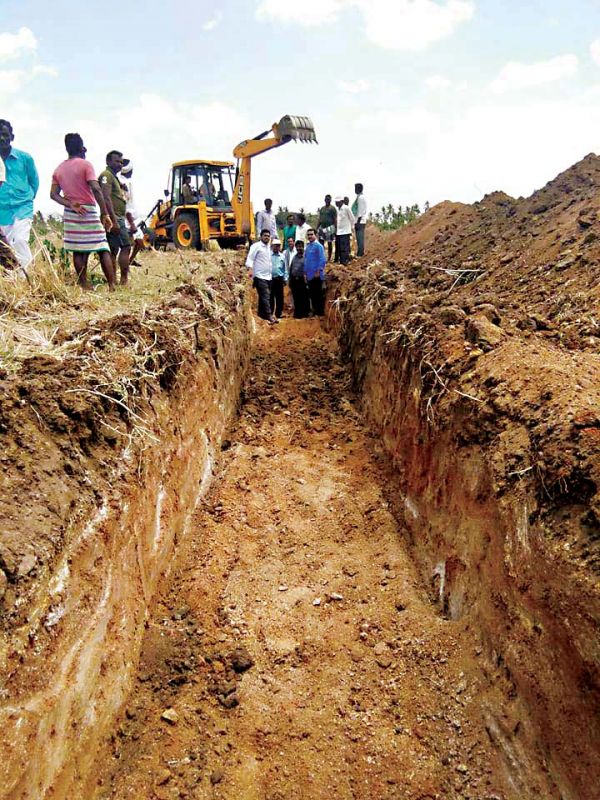 With the assistance of the revenue, irrigation and forest departments, volunteers of Jan Sangram Parishat and Gandugali Kumararama Yuva Sene worked hard through the month of May to restore the lost glory of the Kamalapura tank.

Though the storage capacity of the tank is .086 tmc, owing to large scale encroachment of the tank bed and silt accumulation, the storage has come down to less than half of this. The tank now gets dried up in February every year, three months before the onset of the monsoon, putting farmers to untold hardship. Waking up to the serious threat, Jan Sangram Parishat, a people's organisation and Gandugali Kumararama Yuva Sene, a local youth forum, appealed to Ballari deputy commissioner Ram Prasath Manohar and Hosapete Assistant Commissioner Prashanth Kumar Mishra to launch measures to protect the tank before it disappeared forever.

With the assistance of the revenue, irrigation and forest departments, volunteers of Jan Sangram Parishat and Gandugali Kumararama Yuva Sene worked hard through the month of May to restore the lost glory of the Kamalapura tank. They started off by conducting a survey of the tank bed, erected boundary stones and then asked unauthorised cultivators to clear the encroachments on their own. On deputy commissioner Mr Manohar’s advice, a cattle-proof trench was dug all along the boundary in the tank backwaters that runs nearly five km. The trench has stopped trespassers and encroachers from entering the tank bed. The authorities have also warned of serious action against those who try to encroach the tank bed.

After digging the trench, local villagers were employed to dig pits and plant saplings along the boundary to make a natural fencing for the tank, with the assistance of the forest department. “This tank attracts many domestic and migratory birds, once the fruit bearing trees grow, they will provide a good hub for nesting of birds. Tourists who arrive here to visit the Hampi monuments, can visit the tank to see the migratory birds too,” said Dr Subba Rao, a wildlife enthusiast. Desilting was another major effort to rejuvenate the tank. As per estimates, the silt is  more than eight feet deep in the tank and about Rs 10 crore is required to remove silt to a depth of four feet in the 476 acre tank. With local farmers keen on using the silt to increase the fertility of their fields, the district administration permitted them to take it away free of cost.

“It’s not silt. It's fertile black soil and is good for sugarcane, banana and paddy crops. Once you dump this soil in your field, you do not need fertiliser for growing crops for 3-4 years,” explained farmer Jigali Galeppa from Hosa Malapanagudi village. For almost 45 days, there was a heavy rush of farmers to take the silt to their fields. Every day, about 10 to 12 earthmovers would lift the silt and load it onto farmers’ tractors. As many as 1,500 to 2,000 tractor loads of silt was removed with the desiltation  helping in removing silt in about 20 acres of the tank bed.

“A farmer incurs an expenditure of about Rs 300 for the JCB machine and tractor, but I do not mind paying this sum. I took 500 tractor loads of silt for my five-acre field spending Rs 18,000, it's no big amount compared to the fertility the silt added to the soil,” says farmer Ambanna.

“Farmers should be permitted  to take silt every summer, by doing this, we can increase storage capacity of the tank without looking for financial assistance from the government,” said Bharamappa Nayaka, president of Gandu gali Kumararama Yuva Sene.

Another threat to Kamalapur tank was the construction of the Hosapete-Hyderabad state highway beneath the tank bund. The UNESCO had last year objected to this saying work on the tarred road in the core zone, would place Hampi again in the list of endangered sites of UNESCO. Now, the district administration had shelved the work and decided to improve the existing road without affecting the original character of the tank much to the joy of farmers and those who can’t have enough of the Hampi monuments.

Like Kamalapur tank, another Vijayanagar period tank – Halli Kere tank which is located near Hampi Kannada University, is also being rejuvenated. According to  an inscription as old as 1534, this tank was a source of drinking water to Varadadeviammana Pattana, a suburban township established to the south-east of Kamalapura. This Pattana was built by king Achyutadeva Raya in memory of his principal Queen,Varadadevi.

The district administration has initiated measures to protect this ancient tank too and is planning to promote it as an ‘eco-tourism’ destination as it is close to Daroji sloth bear sanctuary. There are many lessons to learn from this rejuvenation effort-maybe Bengalureans who live in constant fear of a crippling water scarcity in a city which once had a 1,000 tanks, and the city’s planners could take  a fresh look at their dirt filled lakes and think up innovative measures to bring them back to life.

A bit of brainstorming and a lot more of toil, could make these pristine water bodies spring back to life. If Hampi can do it, why not Bengaluru?

Historians differ on restoring structure to its original glory