Centre may give parade ground to build Telangana Secretariat

A file photograph of Parade Grounds in the city.

Hyderabad: The Union Government is expediting Telangana’s request for allotment of defence lands for the construction of a new secretariat. According to sources in the Defence Department, a decision is expected to be announced within the next couple of months.

The Defence Ministry has already agreed to hand over 100 acres of land for the construction of expressways that are a part of the Strategic Road Development Plan to ease traffic congestion along various routes in the state capital. The Telangana Government had identified six land parcels to be given to the Defence Ministry in lieu of the 100 acres. 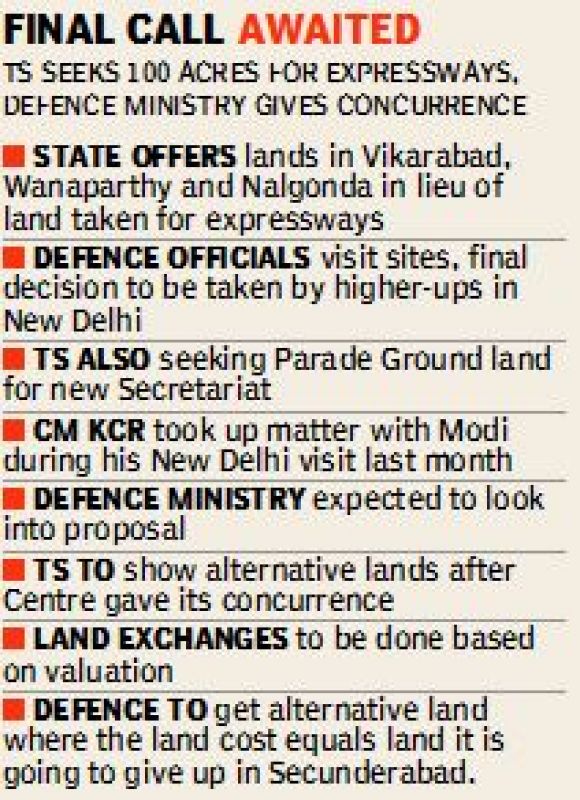 The Government wrote to a few District Collectors, including those in Ranga Reddy, Mahabubnagar, Medak, and Nalgonda, asking them to identify large tract of lands that could be given to the Defence Ministry.

Based on their reports, the Government zeroed in on lands at Vikarabad, Wanaparthy, and Nalgonda. It is now up to the Defence authorities to examine the land and take a final call.

Higher officials from the Defence Ministry have already visited Vikarabad, where around fifteen hundred acres of vacant land have been identified.

Some part of this land is designated as forest land, and belongs to the Forest Department.

However, officials in the Roads and Buildings Department say that there will be no problems in obtaining the land, in case the Defence authorities agree to accept it.

The land that will be given to the Defence Department will be utilized by the Army to build a long-range rifle shooting centre, in or around Hyderabad.

Sources in the department say that the shooting range should ideally be located within a two hours’ drive from the state capital, so that army personnel can practice and return to their base in the cantonment.

Meanwhile, the Telangana Government has made a second request to the Centre, to hand over the army parade ground, for the construction of a new Secretariat with offices of all the departments that are currently spread over different parts of the city.

Chief Minister K.Chandrashekar Rao made this proposal during his meeting with Prime Minister Narendra Modi in the last week of April. The Defence Ministry is examining the proposal, and the Telangana Government is ready to show them alternate lands if they accept it.

Defence sources say that a decision regarding the Parade Grounds will be communicated within the next few weeks.

Defence officials have in mind the 1000 acres of land in Jawaharnagar, 50 percent of which belongs to army, and the remaining 50 percent of which is de-notified land, as one of the alternatives that they would like to ask the TS Government for, in lieu of the parade grounds, once the Centre announces its concurrence.

Kavitha wants CBI questioning in Hyderabad, where it has no consent

Voting begins for first phase of Gujarat Assembly polls; 89 seats up for grabs