Not such a NEET affair: Karnataka SSLC kids lag behind

Experts warn that unless the government comes out with a drastic action plan to improve the quality of education imparted in its schools, the students could feel the heat of too much competition at the national level.

With NEET becoming the gateway to medical courses and another nationwide common exam in the making for engineering colleges as well,  single entrance tests will soon be the norm. However, Monday's SSLC results were not encouraging for state students. A whopping 2 per cent dip in overall results is worrying because two years from now, these students will compete with their peers from other syllabi for the coveted university seats. Unless the state steps up — and fast — SSLC students competing at the national level will feel the serious ramifications of a syllabus driven by the whims of the political classes.

Announcing the SSLC results 2016 on Monday, primary and secondary education minister, Kimmane Rathnakar seemed quite unconcerned with the fall in the pass percentage from 81.82 in 2015 to 79.15 this year, claiming the two per cent difference was only because the government was alert to exam malpractices. “What you see is the quality result,” he claimed, downplaying the issue.

What then ails state schools? This is an often asked question but has now gained in urgency as students from these schools will soon be competing with those from CBSE and ICSE schools in the National Eligibility Entrance Test (NEET), which has replaced the dozens of tests for medical courses from this academic year on the orders of the Supreme Court. The All India Council for Technical Education (AICTE) is also expected to replace the hundreds of engineering admission tests with an all India  single admission test from the next academic year, making the scenario even more competitive for state school students.

Read: Guest column – ‘Need to start from scratch to make a change in govt schools’

Experts in the field warn that unless the  government comes out with a drastic action plan  to improve the quality of education imparted in its schools, the students could feel the heat of competition a  little too much in these national tests  for professional courses. “A two per cent fall in the pass percentage of the SSLC examination  means around 15,000 more students were not able to clear it this time when compared to last year,” points out an expert with concern. 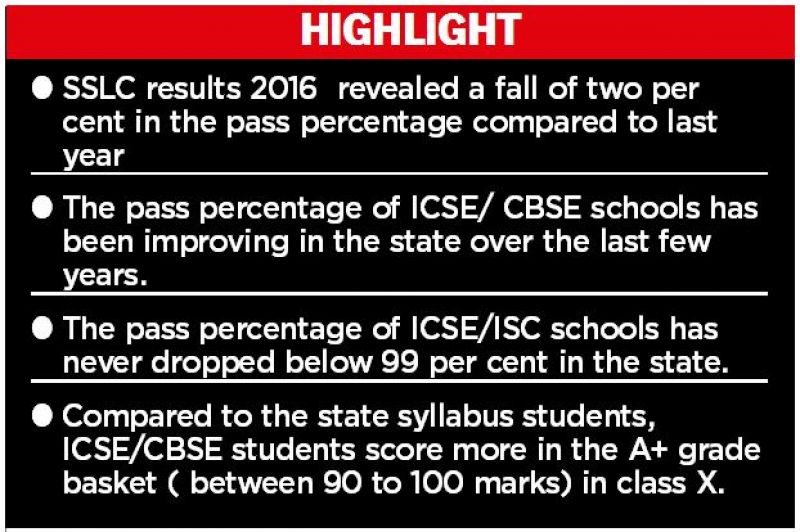 “Look at the ICSE/ISCE results announced recently. Although the number of students appearing for these exams may not be as much as those taking the SSLC examination, their pass percentage never falls below 99 per cent. Compared to this, state syllabus schools are doing very badly,” adds an officer of the state education department, blaming the malaise on several issues like delay in updating the syllabus of state schools.

"Moreover, the syllabus is prepared according to the whims and fancies of the party that may be in power at a particular time in the state. Also, those involved in its revision are rarely aware of the national trends. This has to change,” he stresses.

Kannada medium a major hurdle
A major challenge that state students could face while preparing for NEET is making the transition from Kannada to English medium, believe those in the field. A retired senior officer of the  Pre-University department says most students from  Kannada medium schools often find it difficult to cope even with the English PU syllabus. “And once NEET is implemented , students who studied in Kannada medium upto class X will find it even more difficult. Take the SSLC results announced on Monday. They clearly showed the pass percentage of Kannada medium schools was lesser than that of English medium schools. This needs to be looked into,” he suggests.

Noting that most top ranking students in the recently announced NTSE and JEE Main results were from either CBSE or ICSE schools, the head of a private coaching institute in the city too warns that the trend could continue with NEET unless the government comes to the rescue of state syllabus students.

“Till last year CET question papers were designed to help state syllabus students excel in the examination and so they did not find it difficult to get a medical or engineering seat in private colleges. But this year these students will have to appear for NEET. And once a single admission test norm is brought in for engineering colleges as well, they could face an even bigger challenge. The state needs to do something drastic to help them compete successfully in these exams,” he underlines.

SSLC: 56 per cent pass in BBMP schools
The BBMP has announced that 56.17 per cent of students in its high schools had cleared the SSLC examinations this year. The civic body said here on Tuesday that 996 students out of 1,773, who took the exams, have cleared it. It maintained that 18 students had scored above 85 per cent.  Among the toppers, Fathima Tabassum of Byraveshwara Nagara high school secured 91 per cent followed by Sneha from Srirampura high school, who scored 90 per cent. The top scoring schools were Byravesh waranagar high school (85.3 per cent), Kodandaramapura School (84.61per cent) and Herohalli high school (84.41per cent). BBMP Standing Committee (Education) Chairman K. Nagabhushan has said the top scoring students would receive a scholarship of Rs 10,000 each.

■Guest column: ‘Need to start from scratch to make a change in govt schools’

Hindus as minorities: SC tells Centre to decide in 3 months

Demolition drive comes to a halt in Shaheen Bagh