Then the leachate — smelly, chemical-laden fluid from the rotting garbage from the dumping yard — began percolating into the earth. (Photo: S. Surender Reddy)

Hyderabad: Just about 25 km from Hyderabad, in the shadows of the garbage hillock at Jawaharnagar, R. Lakshmi makes a four-kilometre trip to a nearby village twice daily. Her aim: To get some drinking water for her home from a leaky pipeline. 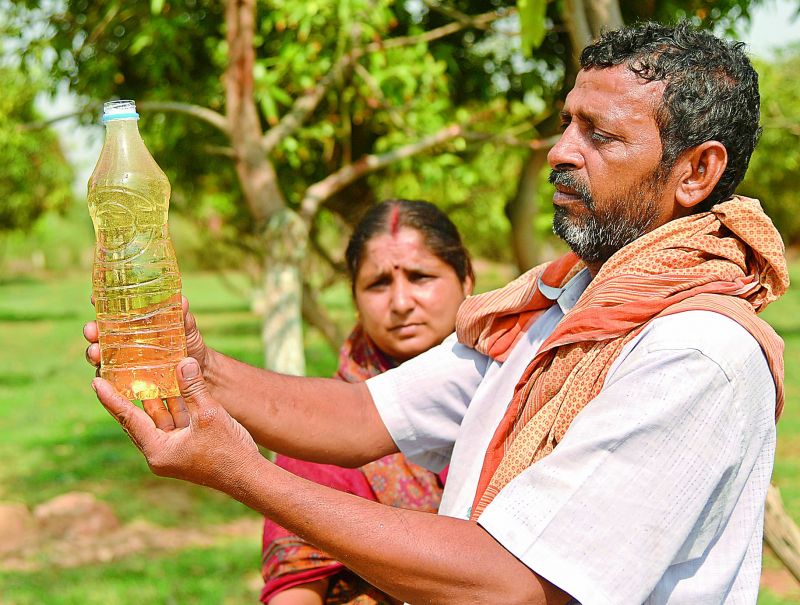 A.K. Pandey and his wife show a bottle of water collected from their borewell (Photo: S Surender Reddy)

Her neighbour A.K. Pandey spends Rs 600 a month to buy drinking water for his family, and another Rs 1,000 per month to purchase water for their daily chores.
Both have borewells at their homes which yield water at 300 feet but the water they get is the colour of petrol. 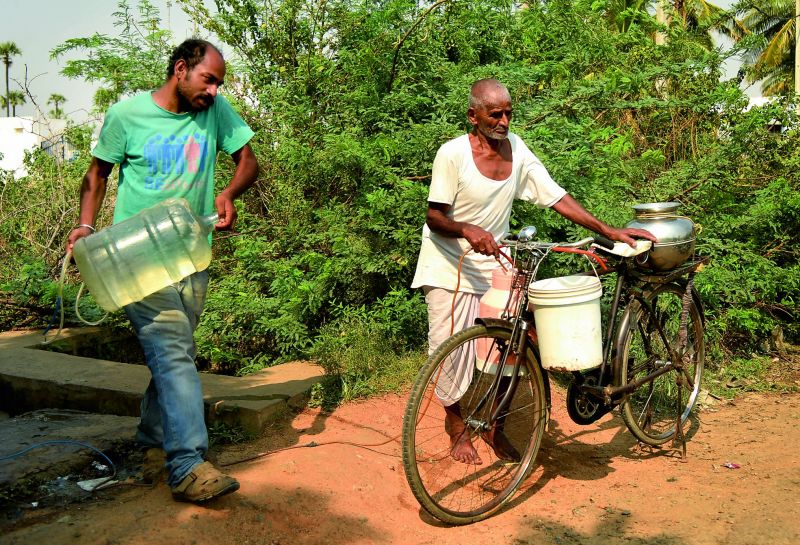 Belying his 85 years, Satti Reddy, who stays in a small village near Jawaharnagar, ventures out in the sweltering sun to fetch water in cans on his cycle for himself and his wife. The well close to his house which had drinking water was turned into a dumping yard. The black coloured water in the well is not suitable for any use.

Ms Lakshmi says, “The government does not bother about the pollution and other problems we face. When officials saw six months back that we were filling drinking water from a leakage in water pipeline near here, they fixed it. They could instead have fixed a tap there.”

Three years ago, Mr Pandey used to grow paddy, irrigated by groundwater in his farm of an acre. He would get around 7.5 quintals of paddy. Then the leachate — smelly, chemical-laden fluid from the rotting garbage from the dumping yard — began percolating into the earth.

“The groundwater started changing colour and output came down. Last year, it was down to less than three quintals. This year I have decided to grow grass for my cow.”

Many residents shared similar complaints in Jawaharnagar and surrounding areas like Shantinagar, Adraspalle and Karmikanagar. No one from the government had bothered to provide them with drinking water, they said.

Helmets soon to become mandatory for children on motorbikes