The ceremony was the first big event of the family without patriarch Lalu Yadav, who is in jail for corruption. The former Bihar chief minister and Rashtriya Janata Dal (RJD) supremo has been held guilty of misusing crores in government funds meant for cattle fodder when he was in power in the 1990s.

In his absence, Rabri Devi, also a former chief minister is in-charge, fitting, considering, she arranged the match.

Rabri Devi had famously told reporters that she wanted daughters-in-law who respect her in-laws, didn't go to the mall and ran the household well.

Lalu Yadav's sisters are among some 200 guests at the hotel. In the morning, cartloads of fruit baskets arrived at the Yadav home. Flowers have reportedly been flown in from Delhi, Kolkata, Bengaluru and Pune. 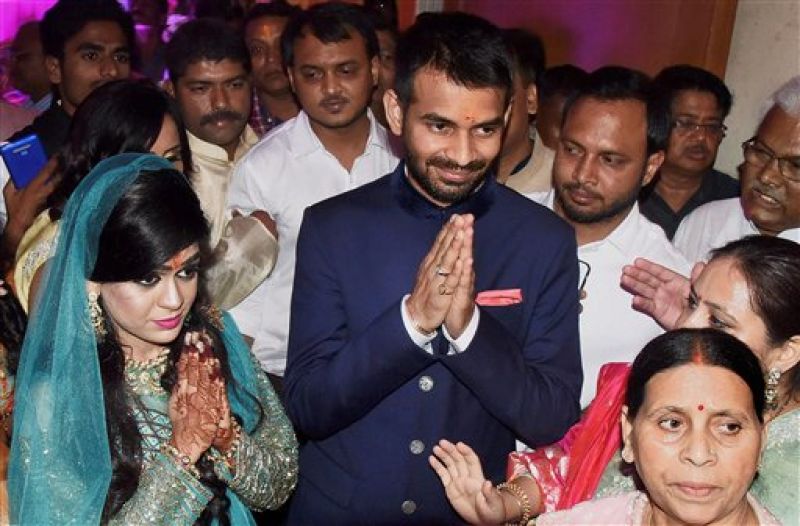 Aishwarya Rai, a history graduate, is the eldest daughter of six-time RJD lawmaker Chandrika Prasad Rai, a former minister. Her mother is a college professor. The wedding is expected to take place next month.

Tej Pratap Yadav, the eldest of nine children, is a first-time lawmaker and was health minister until last July, when Nitish Kumar dumped the RJD and Congress and formed a new government with the BJP.

The couple had recently met at the Patna airport when Tej Pratap was returning from Delhi after meeting his father and Aishwarya was flying to the capital. They sat in VIP lounge and chatted.

The wedding is likely to take place at the veterinary college grounds in the city, the same place where Deputy Chief Minister Sushil Modi's son was married after threats from Tej Pratap Yadav.

"If I attend, I will enter his house and beat him up. If I go to his son's marriage, I will expose him," Tej Pratap Yadav had promised in November. He had later retracted the threat. Sushil Modi, on his part had shifted the venue to the college grounds, closer home.

Some countries adopt terror as policy, some block actions against terrorists: Modi