Police take charge on members of Patidar community during their "Jail Bharo Andolan" for demanding release of Hardik Patel in Mahesana. (Photo: PTI)

Rajkot: In wake of the violence that erupted in parts of Gujarat following a massive Patel community rally in Mehsana and Monday's 'Gujarat Bandh' call given by some Patel organisations, the state government deployed Rapid Action Force (RAF) in Ahmedabad, Mehsana and Surat and stepped up security in others places.

Gujarat Chief Secretary G R Aloria said five companies of Rapid Action Force (RAF) have been deployed in these three cities. In addition, 20 companies of the State Reserve Police (SRP) have also been posted across the state.

Earlier on Sunday, a massive rally of the Patel community demanding reservation and immediate release of their jailed leaders turned violent in Mehsana, as the angry mob resorted to arson and stone pelting. The violence quickly spread in other cities like Ahmedabad and Surat. 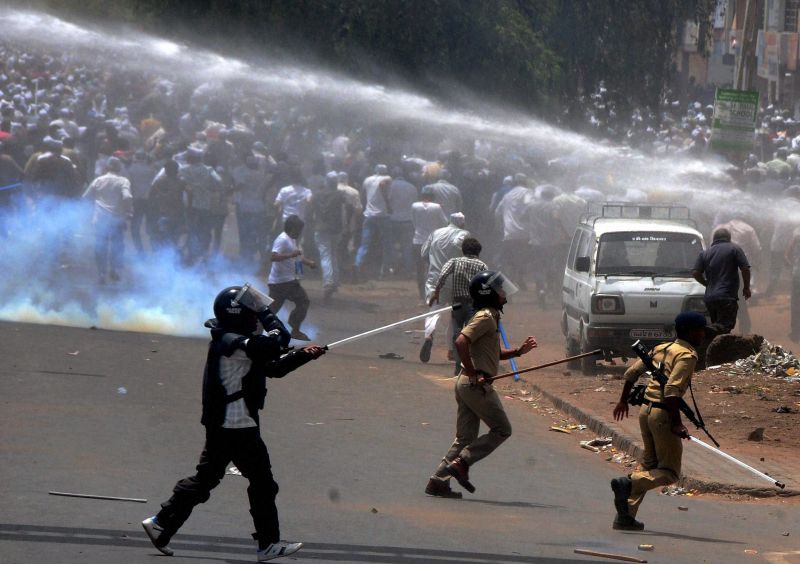 Curfew was clamped in Mehsana town in Gujarat and mobile internet service banned as the rally held by the Patel community demanding reservation and immediate release of their jailed leaders turned violent with two buildings being set ablaze and some police vehicles damaged.

"Police showed maximum restraint in terms of using force. Police have used water canons and tear gas shells to control the mob. Police have fired some rounds in the air. Due to such restraint, no life has been lost," said Aloria. 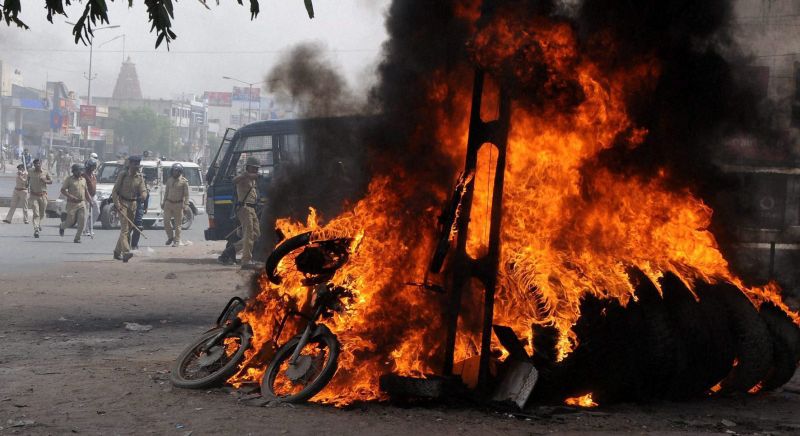 "We have made all the arrangements to maintain law and order on Monday. Twenty companies of SRP have been deployed across Gujarat. I appeal the citizens to maintain peace," Pandey said.

Union home minister Rajnath Singh on Sunday called up Gujarat chief minister Anandiben Patel, who apprised him on the prevailing situation there.

During the telephonic talk, the home minister took stock of the situation in Gujarat’s Mehsana district, where clashes broke out between protesters.

Patel informed Singh about the steps being taken by the state government to control the situation and maintain peace, official sources said.

A godown of Food Corporation of India and a district office were set on fire, the police said, adding 15 persons have been detained in this connection.

Five policemen and two officials sustained injuries in the incidents, the police said while agitators claimed that 25 of their supporters were injured in police action.

In Surat, the police detained 435 Patel agitators who hit the streets after learning about incidents in Mehsana. Surat police commissioner Ashish Bhatia said the situation was under control. 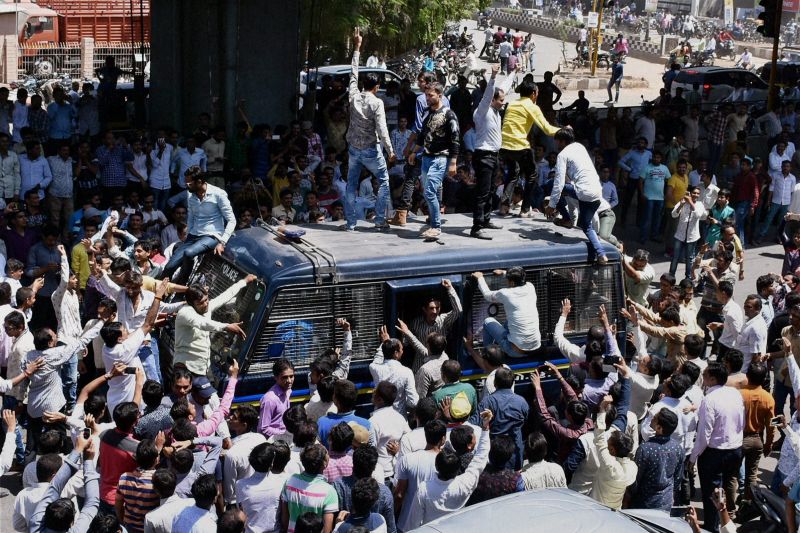 In Mehsana, police used lathicharge and fired teargas shells on the agitators who allegedly engaged in stone-pelting.

Patel protesters had gathered at Modhera crossroad as part of the “jail bharo” agitation announced by the Sardar Patel Group (SPG), one of the prominent groups seeking OBC quota for the Patel community.

SPG chief Lalji Patel received a head injury during the faceoff with the police.

A blame-game erupted with the police claiming it resorted to lathicharge only after some started hurling stones at them while Patels alleged that agitators were targeted without any provocation.

“Our protest was peaceful as announced earlier. However, the police suddenly hit me and some of our members when we were walking ahead of the procession. I was hit on head. You can see the blood on my face. We were beaten up without any provocation,” said Mr Patel.

Flights resume but be prepared for cancellations, rescheduling, delays

Post lockdown, 'work from home' could be an option for central government employees

Railways cancels all tickets booked for passenger trains till June 30

Appraise us about quarantine facilities for doctors: Supreme Court to Centre