Bellandur lake: No smoke without fire

Thick smoke billowing from the lake on Thursday

Bengaluru: Although the recent 'State of Global Air 2017' study states that India, surpassing China,  now accounts for the maximum number of premature deaths from air pollution in the world, civic authorities in Bengaluru are refusing to take heed, unwilling to act to end the wanton pollution of our water bodies. The froth and toxic foam at Bellandur was bad enough. But Thursday's flames when the methane and the garbage and the untreated sewage combusted is downright dangerous. There's no conclusive proof that the fire came from the hutments where an illegal Bangladeshi migrant community has encroached upon the lake beds. But as Meenakshi, volunteer of Kasa Mukta Bellandur, says "We doubt that the garbage collected in and around Bellandur even reaches the designated dumping areas."

Lake burns, no place for babus to hide
The city's largest lake was on fire on Thursday, thanks to years of neglect. But who should be held responsible for the Bellandur Lake mess?

Is it the Karnataka State Pollution Control Board (KSPCB) which should have been proactive in preventing the entry of toxic chemicals and detergents into the water body from factories? Or the BBMP which granted permissions to build numerous apartment complexes without ensuring that they take measures to treat their own sewage? Or is it BWSSB which should have set up Sewage Treatment Plants (STPs) to prevent sewage from the surrounding areas entering the lake? 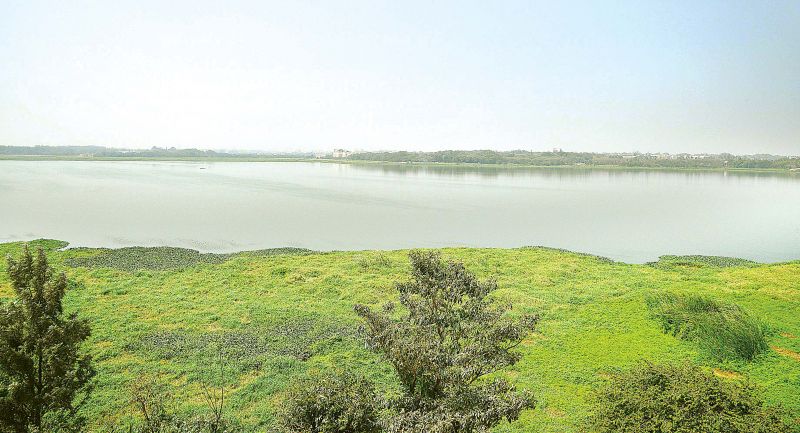 Bellandur Lake on Friday, the day after a major fire broke out (Photo: SATISH B.)

However despite Friday's calamity, none of the above authorities want to take up any responsibility or carry out remedial action.

A senior BWSSB official, on condition of anonymity, said, "The issue has been there for the last 20 years. It has only escalated due to unplanned rapid urbanisation." He argued that lake rejuvenation should be a collective effort and not the sole responsibility of BWSSB. The official said, "Factories cannot simply let their toxic effluents into lakes. They have to be treated to a certain standard. The job of this lies with KSPCB and they seem to have not done anything significant. The regional officials accept bribe and turn a blind eye."

While huge apartment complexes and houses were being built in the area, the promoters were never told to set-up waste treatment plants. BBMP is also not monitoring the illegal dumping and encroachment of the lakes by Bangladeshi community he said. All this has led to an unmanageable situation, he rued.

The official also pointed out that currently there is no underground drainage in the 110 newly-added villages and hence the entry of sewage into the lake cannot be stopped.

What should have been a joint effort to mitigate the lake's sorry condition, has now turned into a blame game. The KSPCB has served notices to BBMP, BWSSB and BDA for their failure, the official lamented.

Regarding the Bellandur mess, Sridhar Pabbisetty, CEO, Namma Bengaluru Foundation, said, "Water Act and Air Act provide enormous power to KSPCB to protect our lakes and environment. They should conduct required tests to ascertain the cause and nature of the fire and direct the appropriate authorities to take corrective action."

DCGI approves use of 2-DG for treatment of Covid patients

Election Commission should be charged with murder: Madras HC