Visitors eat on the floor due to lack of seating. (Photo: DC)

Bengaluru: Though this year’s Aero India has been well received, visitors complained about lack of proper planning at the food court.

There are a wide variety of stalls but many people complained about the poor seating arrangement. According to Latha Meghashyam, a visitor, "We literally had to stand in queues. The crowd was just too much. Many of us had to sit on the floor and eat as there were no places to sit."

Another visitor, Jayanth said, "I can't believe that an international air show of this proportion would not have enough chairs at the food court. My friends and I had to sit on the floor. This does not augur well for a city like Bengaluru, which prides itself as being one of the better cities in the country." 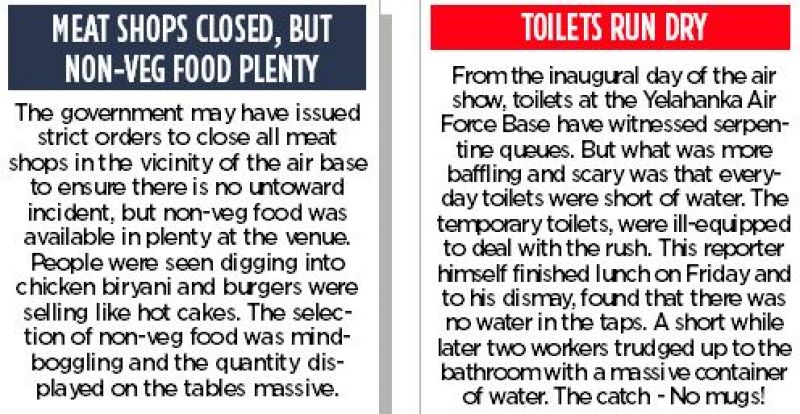 In addition there were no adequate measures to dispose off garbage. "I saw that the garbage bin was not just full, but overflowing. They should have placed more garbage bins at strategic places. I just can't come to terms with the fact that a show which brings pride and joy to our country does not have enough seating arrangements,” Jayanth added.

Since the inaugural day of the air show people have been standing in serpentine queues for food.

When asked about the overflowing garbage, an HAL employee on condition of anonymity smirked and said, "When they cannot even provide enough seating, do you think they will be able to manage garbage!"

DCGI approves use of 2-DG for treatment of Covid patients

Third wave of the pandemic can be handled if stringent steps taken on time: Govt