The Madras Sappers Museum and Archives at the Madras Engineering Group in Bengaluru.

Bengaluru: The Madras Sappers Museum and Archives at the Madras Engineer Group and Centre treasures a rich history of the bravery of Sappers spanning over two centuries. With more than 4,800 books, original photographs and maps used in the two World Wars, the archives have been safekeeping the rich tradition of the group.

“Somewhere in the early 70’s after the 1971 War, the idea to set up a museum was conceived. It took years to collect the artefacts and some were gifted by family members of former Sappers. It is one of the first army units to set up a museum,” says Col (Retd) Grover, who was reemployed as a museum in-charge in 1992.

Under his tenure, it was decided that more artefacts should be displayed to make visitors get a glimpse of the rich tradition of the Sappers.

The museum has documented the involvement of Madras Sappers right from the 1799 battle in Seringapatam, for which the Madras Pioneers were awarded the Battle Honour ‘Seringapatam’. For its involvement in wars post-Independence, the MEG was awarded two Maha Vir Chakras, 13 Vir Chakras and several gallantry awards. 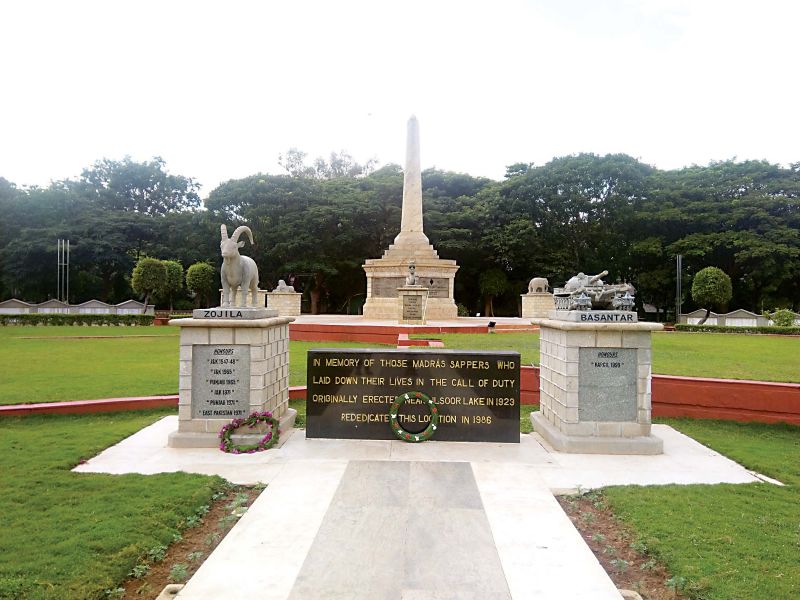 It also received one Victoria Cross and five Indian Orders of Merit (IOM), which is the highest award given to an Indian soldier by the British. The MEG will celebrate its 239 Corps Day on November 18,.

The grey mule, the hero
Mules and bullocks were used as transport animals by the Sappers. A grey mule was commissioned into the service in 1891 and it went on to serve in Tirah, Chitral, Malakand, Tibet, Palestine and Egypt. In 1921, before the Sappers and Miners returned to India from Egypt, all the mules were sold off to the Egyptians. However, Col Basset interceded with the Force Commander Sir Philip Chetwode to make an exception to the Grey Mule, which was then pensioned off in Bengaluru.

In 1930 at the 150 anniversary of the Pensioner’s Reunion, the Grey Mule led the march past of the pensioners. It passed away in 1933 at the age of 47 and its hooves were made into ink wells, polished and silver lined, that have been put on display at the Officer’s Mess, Monkey House at the MEG Centre, 4 Engineer Regiment and Officer’s Mess at the Royal School of Military Engineering, Chatham, United Kingdom. The mule lay buried at the regimental centre.

First Maha Vir Chakra to a civilian
Dhobi Ramachander became the first and the last civilian to be the recipient of the Maha Vir Chakra. On Dec 18, 1947, during the 1948 Indo-Pak War, a convoy proceeding to Jammu was ambushed and a roadblock was created after removing the decking of a bridge. Ramchander helped the convoy fix the decking even as the bridge was under continuous firing. He took the rifle of Lt Fallon’s, who was wounded, and shot down five Pakistanis.

Karnataka govt to sanction Rs 50 cr for development of Kittur