In the last fortnight, at least 20 women have spoken out against MJ Akbar. (Photo: File | PTI)

Mumbai: MJ Akbar, who is facing severe criticisms after multiple women came out and narrated their experiences of sexual harassment at his hands, resigned as Union Minister on Wednesday. The minister was earlier defiant and ignored demands seeking his resignation.

MJ Akbar had also filed a defamation case against journalist Priya Ramani, the first woman who accused the editor-turned-journalist of sexual harassment, amid the #MeToo movement.

In the last fortnight, at least 20 women have spoken out against the former editor-in-chief of The Asian Age.

In his statement, MJ Akbar said, “Since I have decided to seek justice in a court of law in my personal capacity, I deem it appropriate to step down from office and challenge false accusations levied against me, also in a personal capacity.”

"I have, therefore, tendered my resignation from the office of Minister of State for External Affairs."

"I am deeply grateful to Prime Minister Shri Narendra Modi and to the external Affair Minister Smt Sushma Swaraj for the opportunity they gave me to serve my country," he added. 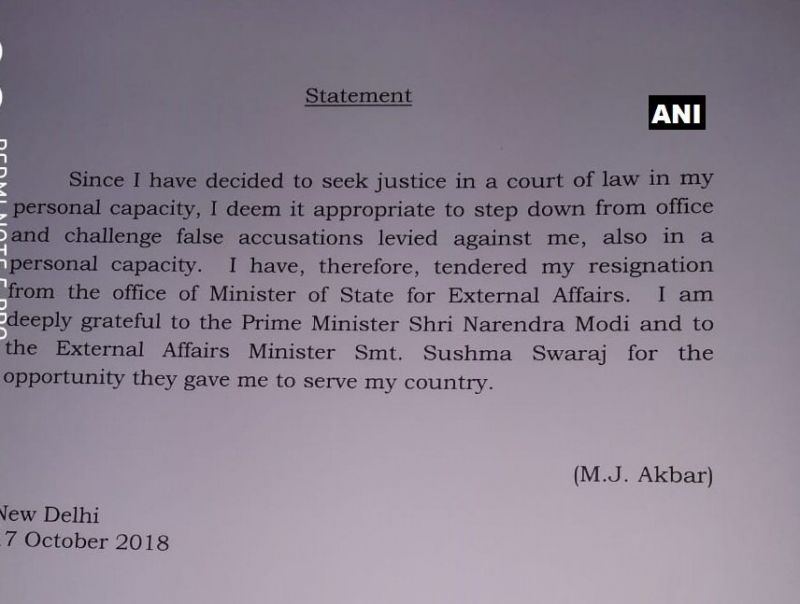