Prime Minister Narendra Modi, who turned 69, reached the Sardar Sarovar Dam around 8:45 am on Wednesday to celebrate his birthday in home state Gujarat. (Photo: Twitter/ ANI)

Vadodara: Prime Minister Narendra Modi, who turned 69, reached the Sardar Sarovar Dam around 8:45 am on Wednesday to celebrate his birthday in home state Gujarat.

Taking it to Twitter, Prime Minister Narendra Modi shared a video of the Statue of Unity and the Sardar Sarovar Dam on the river Narmada in his visit to Gujarat on Wednesday.

Reached Kevadia a short while ago.

Have a look at the majestic ‘Statue of Unity’, India’s tribute to the great Sardar Patel. pic.twitter.com/B8ciNFr4p7

The Statue of Unity, billed as the tallest in the world, was inaugurated by the Prime Minister on Sardar Vallabhbhai Patel's birth anniversary on October 31 last year.

Prime Minister Narendra Modi arrived in Kevadiya in Narmada district at 8:30 am on Tuesday. 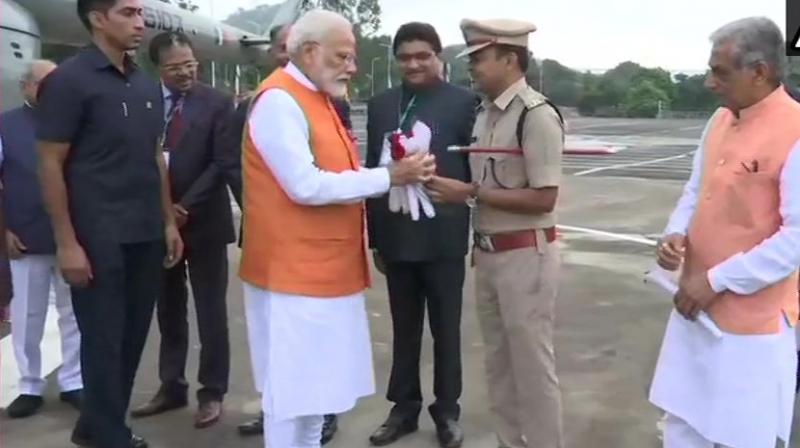 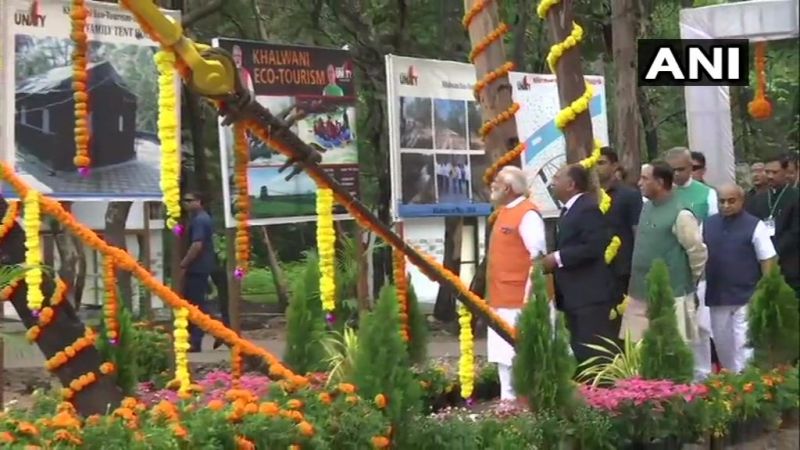 During his visit at Kevadia, the focus is to further improve the local environment and enhance tourist facilities, tweeted PMO.

At Kevadia, the focus is to further improve the local environment and enhance tourist facilities.

Ahead of Prime Minister Narendra Modi's arrival on his 69th birth anniversary, the entire Sardar Sarovar Dam at Kevadia in Narmada district of Gujarat was illuminated with bright coloured lighting on late Monday night.

During his tour, the PM is expected to perform a "Maa Narmada Poojan" and visit the Sardar Sarovar Dam control room. After visiting the Duttatreya Mandir in Garudeshwar village and a children's park, he would address a public meeting at Kevadia, a town approximately 200 km from Ahmedabad.

PM Modi would also visit his mother later in the day.

Speaking to ANI about the Prime Minister's visit, a priest told that he will also be performing 'pooja' at the Narmada river.

"We all are very excited about his visit. He will first perform aarti and pooja at Narmada river where he will perform all rituals to pay respect to the sacred river. This is for the fourth time I will make him perform pooja," the priest said.

Till late night Monday, several arrangements were being made to welcome Modi at the dam site. The entrance of the dam area is being decorated with flowers and other materials.

While Prime Minister Modi is celebrating his birthday in Gujarat, different events are being organised in parts of the country to mark the day.

In Andhra Pradesh's Vijayawada, an exhibition to portray Prime Minister Modi's life was organised on Monday.

"Here we are showing a life sketch of PM Modi's life. All schemes of his government, which were delivered for the upliftment of poor and needy people of this country are being shown in the exhibition," an organiser said.

"Every unit of BJP will display this kind of exhibition in every Mandal of this country. BJP leaders will indulge in several welfare services like providing free medical and health checkup camp, going to hospitals, distributing fruits to patients, awareness on plastic ban, Swacch Bharat etc. The Prime Minister has dedicated his life to the nation," he added.

The BJP is celebrating Prime Minister Modi's birthday as 'Seva Saptah' starting September 14 to September 20. The party has announced that several social initiatives will be undertaken by the party leaders across the nation during this week-long period.

Last year, PM Modi celebrated his birthday by spending time with school children from his parliamentary constituency of Varanasi in Uttar Pradesh.

India reports 40 cases of Covid Delta Plus variant, most cases from four states