Hyderabad: The generosity of one woman helped revive a 13th century temple, which remained in ruins till 2006. Situated at Yamnampet, 2 km from Ghatkesar, this is just off the Outer Ring Road. If you follow the priest’s advice, you will have to look for the colourful gopuram till you reach the Ranganathaswamy temple. 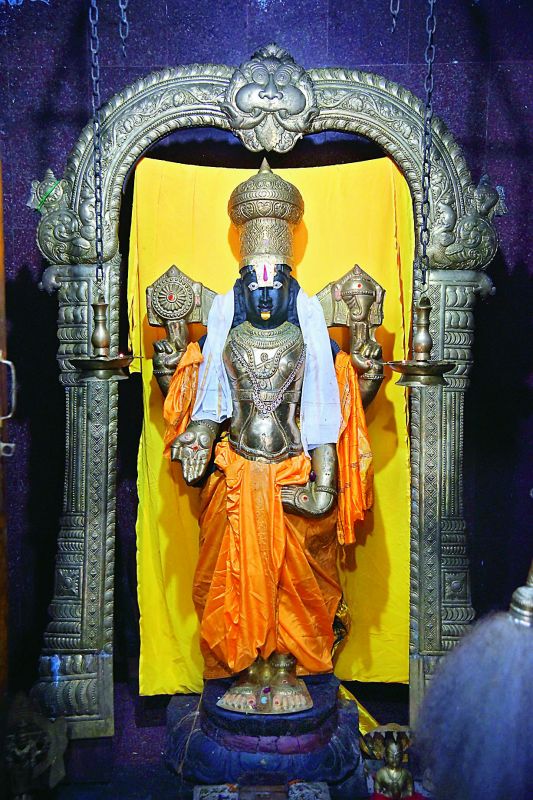 Standing tall: The idol of Lord Venkateswara, which is from Tirupathi while the brass body armour is from a devotee. (Photo: DC)

The story of revival of the temple is rooted in a providential coincidence. “Ms Leela Ranganathaswamy, wife of former chief engineer A.P. Ranganathaswamy used to come to our college because of the connection she had with the then principal, Dr P.N. Reddy,” said Dr Taher Mahi Katikaneni, chairman of the Sree Group which runs the Sreenidhi Institute of Science and Technology (SIST).

During one of the meetings, she expressed the desire to build or contribute to a Ranganathaswamy temple. “The sarpanch of the village, who happened to be present at the meeting, mentioned about this Ranganathaswamy temples and requested us to take up the restoration work. Leela came forward with an initial donation of `5 lakh. The Sreenidhi management made sure everything is restored,” Dr Mahe said.

“When we started the college in 1997, we knew that a temple existed but nothing beyond that,” he added. According to him, the temple was vandalised and the statues were taken away many years ago. It was also dug up by some people in search of treasures.”

Some of the students of the institute visit the temple, and people from the nearby villages go there quite often and even wedding rituals are conducted here. 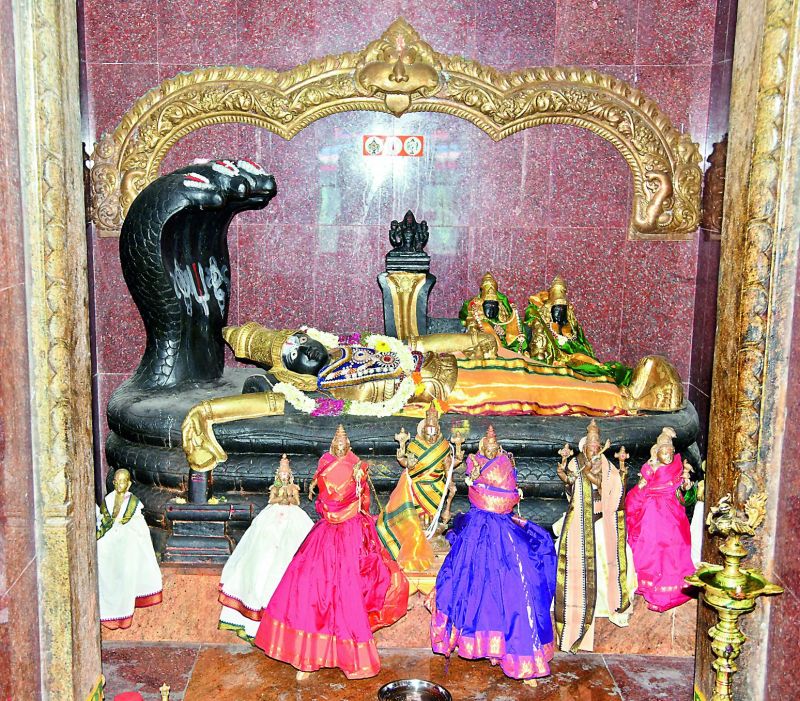 The temple does not have land documents to check the authenticity but oral tradition speaks of a background with kings and Mughal emperors and destruction of an ancient Vishnu temple.

This 13th century temple was a swayambhu devalayam, which means the statue of Lord Venkateswara came up on its own. The current idol is from Tirupati while the brass kavacham (body armour) was donated by a devotee from Pembarthi, which is famous for its brass items.

The temple, according to chief archaka Ch Venugopalacharyalu, was built by Vishnukundila I, and later developed by the Vijayanagara kings. That did not last for very long as the Mughal emperor Aurangzeb, destroyed it. The mutilated bust of goddess Lakshmi is cited as proof of this vandalism.

Later, thugs took away all ornaments of the gods and goddesses which were lying locked in a vault right under the idol of Lord Venkateswara. They also took away the idol of Lord Ranganathaswamy, which was installed in another temple.

From then on, the temple remained in ruins. It got a facelift in 2006 with the `20 lakh contribution. Restoration works were initiated and a kumbhabhishekam was performed by Nalandigallu Lakshminarasimhachary, chief archaka of the Yadadri temple, along with 60 more priests.

Mr Venugopalacharyalu said, “The temple was built on 12 acres of land. Now it has only two acres. The rest of the land is occupied by people from all communities. The Tirumala Tirupati Devasthanams is ready to help the renovation work but wants the entire land. We are falling short by two guntas and the locals are not ready to give up the occupied land.”

Absence of proper title deeds makes it a Himalayan task and villagers are not ready to fall in line.

But Mr Venugopalacharyalu is determined to make this temple popular, and said, “We organise Brahmotsavams and Ekadasi celebrations. In fact, we have Uttara Dwara Darshanam for Mukhoti Ekadasi, which is auspicious.”

Mr Venugopalacharyalu has some wherewithal problems. “The temple does not have a main gate and does not have dwaras though it has dwarapalikas,” he complained.

According to him, doors are important for temples to maintain discipline. Even with animals sauntering in and out, he has managed to cultivate a small tulasi garden which he calls tulasi vanam. “Normally most temples have land to grow vegetables to offer as prasadam. That is not possible here due to lack of space,” he said.

He had to start his life from scratch. When he came to look after this temple from Bhadrachalam, he lived with his family for a meagre salary of `2,500 per month for 12 years. “I had to clean the temples, take care of the seva and prepare prasadam for the 13 temples,” he noted.

Once the Telangana state government was formed, the salary was hiked to `6,000. Apparently, the endowments department does not pamper temples that make less money, even though they are ancient.

“When the temple was handed over to me in 2007 there was no bell. We had to remove the door at the sanctum sanctorum of Sri Ranganathaswamy temple because of his ‘shayanam’ (recumbent position). He is seven-an-a-half-feet wide and occupies the entire garbha gruha,” said the archaka.

“This is one temple where both the statues of Lord Venkateswara and Lord Ranganathaswamy are in one place,” said Mr Venugopalacharyalu. The utsava murtis are also worshipped daily. There is a separate temple for Lord Hanuman, which dates back to centuries, claimed the priest. 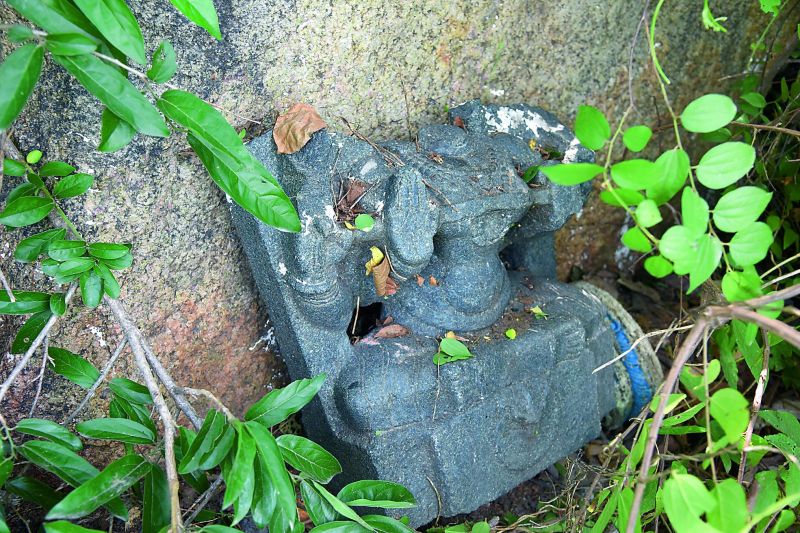 Witness to vandalism: The mutilated bust of goddess Lakshmi lies in the temple premises. (Photo: DC)

“Lord Hanuman is the kshetrapala and Mughal soldiers could not even go near Him,” he said. And next to it lies the ruined statue of Lakshmidevi.

Coronavirus cases in Maharashtra climb to 101