AICC Vice President Rahul Gandhi with Chief Minister Siddaramaiah and Mayor G Padmavathi during the inauguration of ‘Indira Canteen’, at Jayanagar in Bengaluru on Wednesday

Bengaluru: Chief Minister Siddaramaiah defended Mr Rahul Gandhi’s Amma Canteen faux pas, saying, “It was a mere slip of the tongue. There is nothing wrong in borrowing ideas from others if it is for the benefit of the poor.”

He went a step ahead and boasted how Indira Canteens are better than Tamil Nadu's Amma Canteens and said, “Amma Canteen only serves breakfast and lunch. But we serve dinner too.” 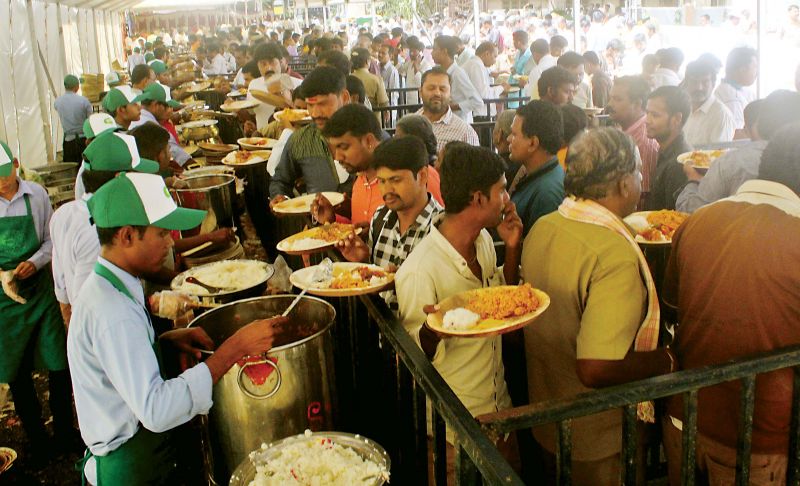 Rahul becomes first customer
The BBMP had announced that food will be supplied free on the first day of Indira Canteens, but Mr Rahul Gandhi paid Rs 10, which he borrowed from KPCC president G. Param-eshwar, to buy a coupon for the breakfast. Mr Gandhi had vaangi Bath or brinjal rice and curd rice.

When Indira’s detractors chorused 'Indira Hatao', she replied with 'Gharibi Hatao'. The same way, Indira Canteens have been started with 'Bhook Mitao' mission. These canteens will help the poor who know the pain of 'hunger',” Mr Sidda-ramaiah said. Siddu further said that the poor will teach opposition parties a lesson and termed them anti-poor.

Mixed reviews on quality of food

It was a mixed review for the quality and taste of food served at Indira Canteen on the first day. Some lauded the efforts of the government to provide food as cheap as Rs 5 and Rs 10, while others said the rice used in vangi baath
was soggy.