It’s a club with a 150 year-old- history and has provided Bengaluru one of its biggest lung spaces in the heart of the city after Cubbon Park and Lalbagh with its lush green landscape where golfers are often seen teeing off to break the monotony of their day.

The 125-year-old Karnataka Golf Club finds its future in jeopardy. Why? A stray golf ball that hit the car of the Additional Commissioner of Police sent authorities into such a tizzy that they considered moving the historical course out of city limits. Deputy CM Dr G. Parameshwara, who made the the remark, was quick to see his folly and withdraw the statement. But the damage was done and the regularity with which elite clubs are targetted is even more cause for scepticism. A move like this could have cost the city both a heritage spot and a much-needed lung space. It’s also an oasis of recreation for the overworked Bengalurean trying to strike a work-life balance, Aksheev Thakur reports

It’s a club with a 150 year-old- history and has provided Bengaluru one of its biggest lung spaces in the heart of the city after Cubbon Park and Lalbagh with its lush green landscape where golfers are often seen teeing off to break the monotony of their day.

But it took just a ball from the club accidentally hitting the windscreen of the Additional Police Commissioner’s car parked in the grounds of the Chief Minister’s official residence, Krishna nearby recently, for Deputy Chief Minister, Dr G Parameshwara to talk about the possibility of shifting the Bangalore Golf Club (BGC) from the location it has occupied for over a century.

Although he did a quick backtrack on the decision, it had already sullied his image, attracting ridicule on social media, and anger from civic activists, who accused the government of making a knee jerk extreme reaction to a one-off incident.

Mr Vijayan Menon,  a member of the Karnataka Golf Federation, rubbishes the government’s concern for people’s safety close to the course, pointing out that it is one of the oldest in the country and serves as a cultural space too. “I am sure there is a real-estate angle to this. The government should instead show more concern for the potholes on the roads have taken so many lives,” he says with disdain.

A golfer, Abhijit Ajayan, who is a law consultant in the city, is also distressed at social spaces being targeted by the government. “Clubs help break the monotony of tough professional lives.  Had BGC  been shifted elsewhere, it would have affected our professional lives too. I am glad the deputy CM withdrew his decision,” he says.

The BGC with its 18 -hole course boasts of a few thousand elite members and is one of the oldest clubs in the country. And so it was with some surprise that people heard Dr Parameshwara  tell the media on July 14 that he would talk to its officials about shifting it after the senior officer’s car was damaged by a ball  hit by a golfer . But the very next day he did a U-turn informing it that as Captain Shivapradeep of the BGC had promised to increase the height of the mesh and take precautions, the club would remain undisturbed. Backing the Captain, a BGC official calls the incident isolated and says it will be taken care of once the height of the mesh around the course is increased.

First BTC, now KGA: Stick to your turf!
For the people of Bengaluru the government’s drastic solution (though swiftly retracted)  to the incident of a ball from the Bangalore Golf Club damaging a car of a senior police officer parked nearby speaks once again of its lopsided approach to the city’s welfare.

Several are suspicious about its motives as in the past the Bangalore Turf Club too was targeted by the Yeddyurappa government. When redesigned in 2002, the lush green 60-acre golf club did not lose a single tree thanks to its pro-environment management and the greens of the city are keen that the government shows similar concern for its tree cover. 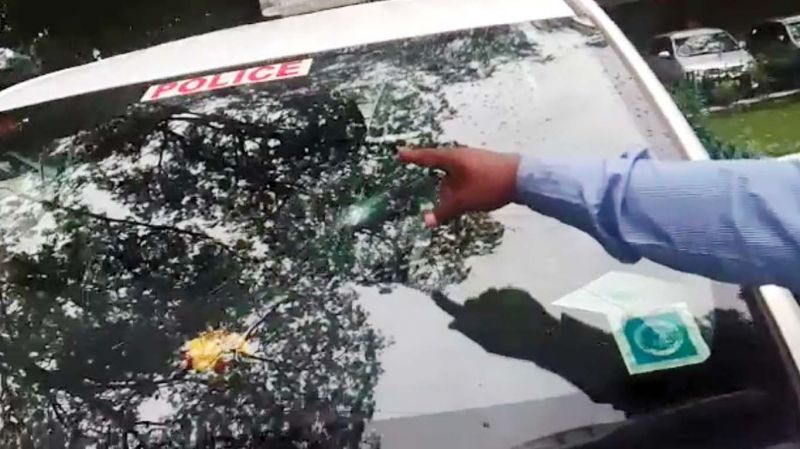 “All projects like elevated corridors which are supposedly meant to decongest the city, smack more of real estate influence. It is good the decision to shift the golf club was withdrawn. Nobody should be allowed to strip the city of its heritage value,” says Mr Vijay Nishanth, a tree doctor. Noting that the BGC has its own water management system, he suggests the government should be supportive of it.

Country head of  Greenpeace, Kshitij Urs says that if a proposal ever comes up to shift the club elsewhere, it should be converted into a tree park and not lose its grounds to some concrete monstrosity. Recalling the proposal to build Asia’s tallest tower at the Race Course, he stresses that such schemes are unacceptable.

CEO of Namma Bengaluru Foundation,  Sridhar Pabbisetty, too believes the government should react more strongly to the increasing commercialiation of residential areas and the falling standards of infrastructure in the city instead of targeting its green lung spaces.

Guest Column: ‘A valuable lung space, hold on to it’
VIJAY NISHANTH, tree docotr
The Deputy Chief Minister's proposal to shift the golf course from the heart of the city just because a ball from it hit the windscreen of the Additional Police Commissioner’s car parked nearby sent me into a tizzy. The 150-year-old glorious history of the golf course needs to be preserved for the sake of the sport and not destroyed.

The Bangalore Golf Club (BGC) is patronised by sportsmen with a deep enthusiasm for the game , who go there to maintain a balance between their professional and personal lives. It is one of the oldest clubs of the country, which has catered to its members for decades. Winston Churchill once caught butterflies in the grounds of the club that  was established by the British and the Mysore Maharaja became the first Indian to receive its membership. Its restructuring in 2002 was done without damaging even one tree, which is why it stands apart in terms of  management.

Thanks to the club’s pro-environment outlook , the grounds are lush with greenery and are  home to different species of trees, including gulmohar and eucalyptus that attract a variety of birds. Its green cover makes it an ideal location for the game , which is all the more reason to protect it  rather than shift it. The bizarre idea to shift it for no real reason gives is quite suspicious considering that the area is posh and is home to the Chief Minister’s official residence besides several five star hotels and boasts of a high real-estate value.

How can someone come up with an idea like this that reeks of arrogance without looking at the alternatives?  Considering the rich environment and heritage value of the golf course  its good that the  Deputy Chief Minister, has dropped the idea.

Decision on Air India will give new energy to aviation sector: PM Modi