A view of the leakage at KPHB 6th Phase HIG154.

Hyderabad: Residents of the KPHB 6th phase are falling ill after drinking contaminated water. Sewage is getting mixed with drinking water due to lack of coordination between the Water Board and the GHMC after a water pipeline developed a leak in the area.

The GHMC recently built a cement concrete road in the area. During digging for the road, the Manjeera pipeline developed a leak. The pipe runs adjacent to an open drain and a drainage pipeline too also has a leak. Sewage from the leaking sewerage line is suspected to be entering the drinking water pipeline. As part of a recent drive, new sewer lines were recently laid but not properly covered. 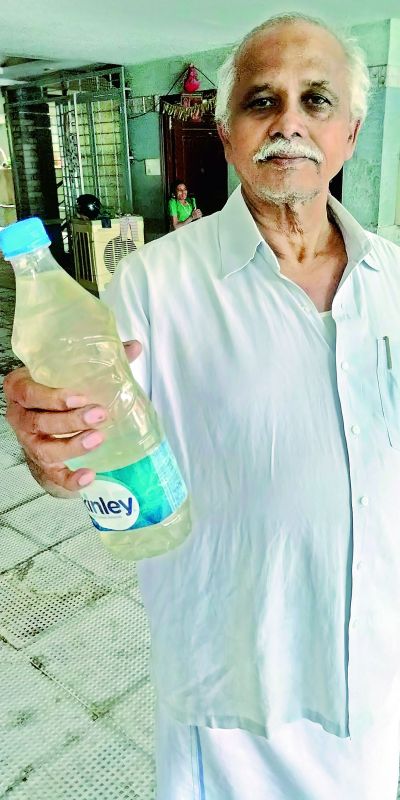 Mr Subba Rao, a resident, said, “People are suffering from vomiting. My grandchildren, three and seven years old, and I fell sick after consuming the water. Despite repeated complaints, the leakage is not being fixed.”

RO purifiers in the locality have failed to clear the contamination. He said officials had inspected the site, but the water continues to get contaminated. He said there was a drain underneath the road, which cannot be cleaned.

It was stated that drinking water supply would be suspended to the area on Tuesday to avoid the supply of contaminated water. “We had sought permission to fix the leak but the GHMC laid the road overnight. Now we have to dig the road to fix the drinking water pipeline leak. Again need the GHMC’s permission,” said a Water Board personnel at the site. While this tiff is on between the Water Board and GHMC is on, residents in the affected area are getting their water treatment systems repaired and buying bottled water as alternatives.

Despite protests, CAA will not be withdrawn: Amit Shah

Apologise? Who, me?: Rajinikanth