The chief ministers who are in Delhi to attend the NITI Aayog meet on Sunday, which will be chaired by PM Modi, plan to address their concerns with PM Modi.

At a joint press conference on Saturday, CM Mamata Banerjee said, "This is not a democracy, where we are not being allowed to meet a chief minister. A wrong message is being sent out. If this happens in the capital of the country, what happens to other states? This is a constitutional crisis. We will request PM Modi to solve the problem." 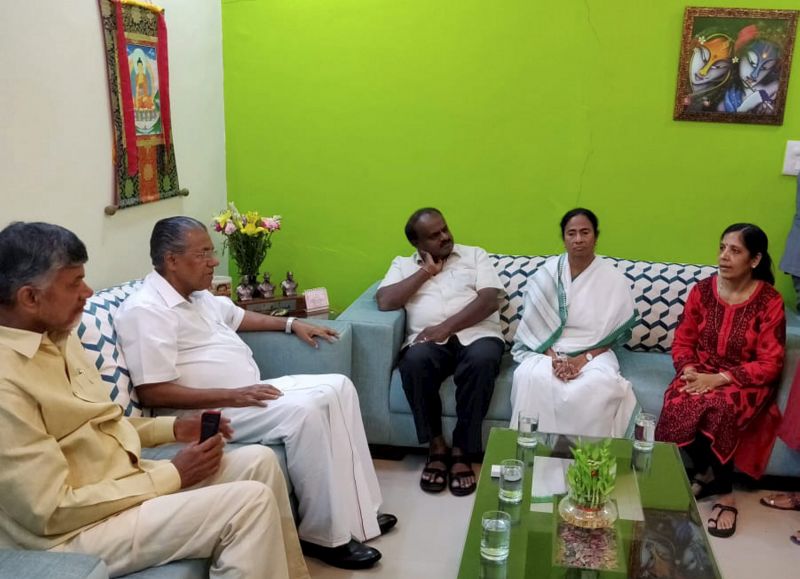 Speaking about the strike by IAS officers, CM Kejriwal told NDTV that this was being done at the instance of Prime Minister Narendra Modi.

"We came here to show our support to Delhi Chief Minister Arvind Kejriwal. We demand that the Prime Minister interferes and takes necessary steps to solve the problem," Kumaraswamy said.

Andhra Pradesh CM N Chandrababu Naidu, who pulled out from the NDA over the Special Category Status (SCS), said that the centre and states need to work as one unit to address the issues of distressed people.

Kejriwal thanked the four Chief Ministers, saying "we all will work together to save democracy".

Even though a host of opposition leaders have backed Kejriwal, the Congress has been on the other end of the spectrum by calling the protest a drama. The BJP, too, has countered the protest and blamed Kejriwal for shirking responsibility.

The open support to the Aam Aadmi Party chief by the four regional heavyweights - from Trinamool Congress, Telugu Desam Party, Janata Dal (Secular) and Communist Party of India (Marxist) - comes amid opposition efforts to cobble together a rainbow coalition ahead of the 2019 Lok Sabha elections.

After Pegasus decision, Rahul Gandhi says PM is not above nation