Hyderabad: US Republican presidential nominee Donald Trump’s recent statement indicating that H-IB visas would be restricted, and his administration, if elected, would revisit the Optional Practical Training programme authorisation for F-1 visa holders, has created apprehensions among engineering graduates who are dreaming of higher education in the the United States.

Although Mr Trump seems to have softened his stand since then, students and parents are closely watching as to who, Mr Trump or Ms Hillary Clinton, would become the US President after November 18 polls.

Incidents of several Indian students belonging to Silicon Valley University and North-Western Polytechnic University being sent back from US airports and deportation of about 300 Indian students who had joined the University of Northern New Jersey in the last six months are still fresh in students' minds.

Students here are now adopting a wait-and-watch approach instead of immediately pursuing their US study plans after completing graduation. 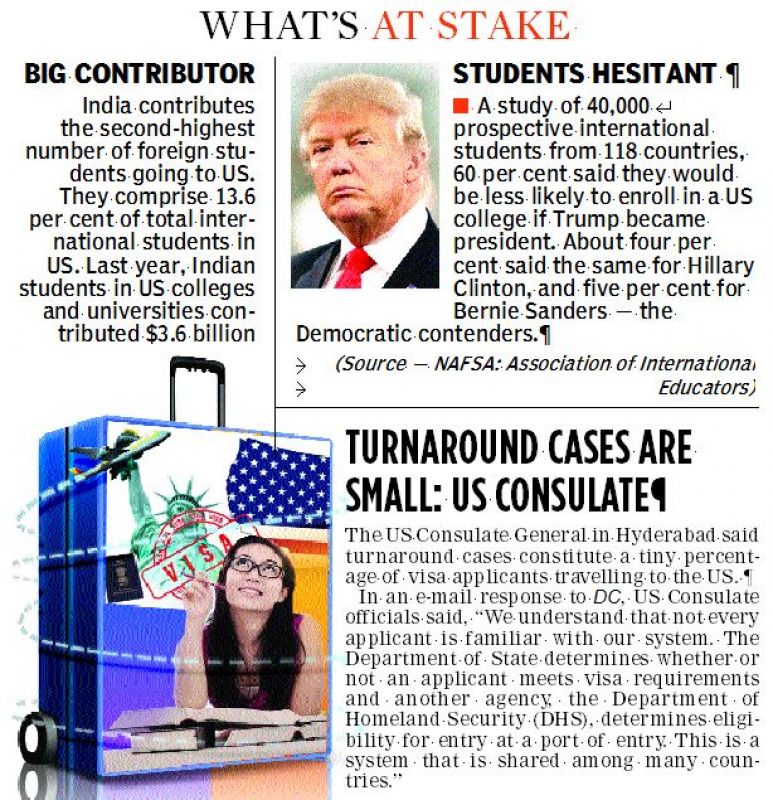 A student from a leading private engineering college in the city, who will be heading to the United States in August for his Masters, said many of his friends were keenly following developments in the United States.

Some of them had postponed their plans for the Fall admissions (September 2016) and had decided to explore the option of Spring admissions (January 2017) hoping that better clarity will emerge in the next few months.

“The authorities have tightened visa norms and quite a number of applications are being rejected. Bank statements and financial documents of candidates are now being thoroughly checked in view of the January incidents when Telugu students were found to be heading to varsities in the United States solely relying on part-time jobs to pay their tuition fees,” he said.

Ham radios to the rescue in rain-hit Kerala