Chief Minister and AIADMK chief J. Jayalalithaa along with her close aide Sasikala Natarajan after casting vote for the Assembly polls at the Stella Maris college in Chennai. (Photo: AP)

Chennai: Most of the exit polls released on Monday after polling ended in Tamil Nadu predicted a clear majority for the DMK, while the Times Now-C Voter survey projected chief minister J Jayalalithaa retaining power with a comfortable majority.

The C Voter poll projected 139 seats for the AIADMK, 78 for the DMK and 17 seats for others comprising DMDK-PWA-TMC alliance and the PMK. The survey said the BJP would not open its account in this election.

However, the rest of the exit polls are with the DMK. Opinion polls conducted by Axis-My India telecast on India Today television and Today’s Chanakya-NewsX gave a maximum of 140 seats to the DMK-Congress alliance. The Axis-My India poll gave 124-140 seats for the DMK, AIADMK (89-101), BJP (0-3) and others (4-8). 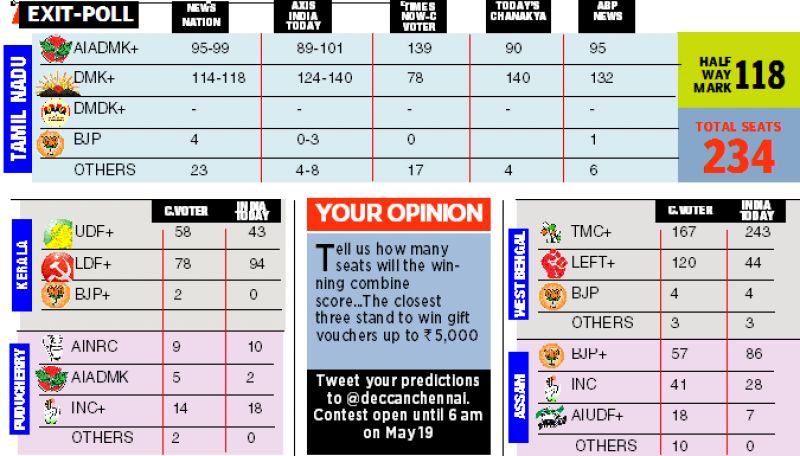 NewsX-Chanakya exit poll shows that DMK will win 140 seats, while AIADMK will win 90 and 4 will be won by BJP and others. Another poll to give the DMK combine more than 130 seats is the survey done by ABP News. It says the DMK alliance will win 132 seats followed by the AIADMK which is projected to bag 95 seats, the BJP one and six for others.

The mood in DMK seemed upbeat with its chief M Karunanidhi openly declaring that the party would form the government on its own. He had already declared that he would be the CM if the DMK comes to power.

CM J. Jayalalithaa, who usually waves out a victory sign also symbolising her party’s “Two Leaves” symbol, was not her ebullient self on Monday. When reporters asked for her comments after she exercised her franchise at Stella Maris College, she merely said, “You waited for so many days. Wait for another two days to know people’s verdict.” DMK's prince-in-awaiting Stalin said the party would form the next government in the state with M. Karunanidhi as its head.