2 cases registered by the Hussainialam police after the blast and recovery of unexploded bombs.

Hyderabad: Several Muslim organisations and various political parties expressed dismay over the acquittal of five persons who were accused in the Macca Masjid blast case here.

Majlis Bachao Tahreek (MBT) described it as a major blow to the fight against terrorism. MBT spokesperson Amjadullah Khan said that the acquittal in Macca Masjid blast case clearly proves the lenient attitude of the BJP government at the Centre and the TRS government in Telangana in pursuing the cases of ‘Saffron Terrorism.’

He said that the court acquitted the accused as it could not find any ‘direct evidence’ against them. Mr Khan alleged that the NIA had diluted its investigations at the instance of the BJP government.

“After these acquittals, who should we hold responsible for the blasts that killed nine people and injured 58 others persons? Victims of Macca Masjid blast have been denied justice. The accused persons have been acquitted and the culprits are moving freely. It is highly shameful that the perpetrators of a terror act remains non-punished even after 11 years,” Mr Khan said. 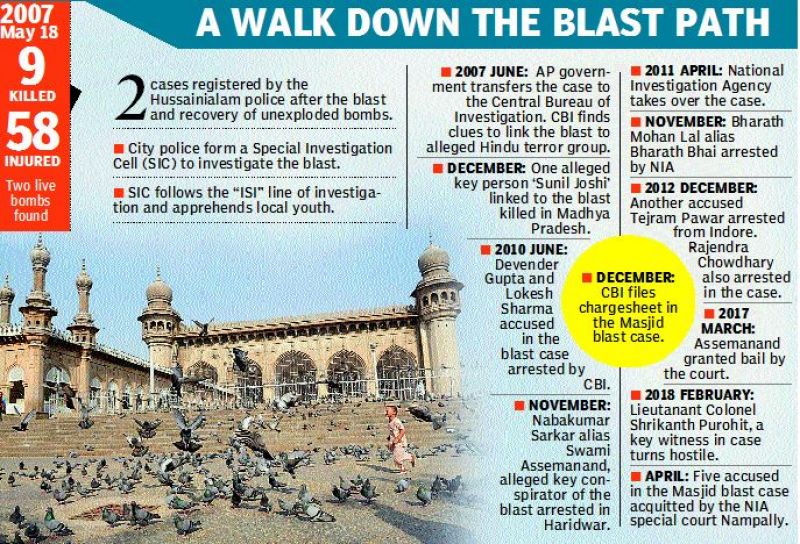 Tehreek Muslim Shabban president Mohd Mustaq Malik said that from the beginning, the case was not investigated thoroughly. “The judge pointed out lack of clinching evidence in the case. When those guilty in Dilsukhnagar blast case can be brought from Nepal and produced before the court, what prevents the investigation agencies from nabbing two absconding accused in the case for 11 long years ?”  he asked.

Jamaat –e- Islami, Telangana and Odisha president Hamed Mohd Khan said that the investigation officials, who had shown leniency in carrying out the probe, should be made accountable for not delivering justice. “Now the question arises as to who had carried out the blast when two sets of people were acquitted by the court?” he asked.

The Darsgah Jihad O Shadat activists staged a protest at Moghalpura against the acquittal of Macca Masjid blast accused.

The activists alleged that the investigation agencies had played unprofessional role in the last stage of investigation and allegedly helped them in acquitted in the case.

The activists burnt an effigy of the Hindutva forces. The Moghalpura police took them into custody.

Private hospitals to face music if Arogyasri patients are ignored

Deaths due to lack of oxygen spark tension at Ruia