Aircrafts performing at the India Aviation 2016 at the Begumpet airport (Photo: DC)

Hyderabad: The India Aviation show 2016 kickstarted in the city. The show will be open to public on March 19 and March 20.

Canada to assist build airports
Canada as global leader in civil aviation will help India in the construction of airports and aircraft certification and in establishing Indian aircraft certification centres. The Canadian government will also provide training in maintenance, repair and overhaul of Indian aircraft, said Canadian high commissioner Nadir Patel. The Canadian government is encouraging their students to study in India through an exchange programme. Nadir Patel added, “Canada and India have signed an MoU this month to explore, expand the aviation sector. Canada will assist India in airport infrastructure and technical aviation training. Canada has 400 partnership agreements with India.”

HAL, which already has DGCA approval for the existing design, is seeking a green signal for a modified one in the passenger segment. HAL CMD T Suvarna Raju said the new aviation draft policy has thrown the market wide open for low-cost aircraft to improve regional connectivity. They have offers from a few companies for the passenger segment aircraft.

200 brands participate in show
Emirates’ A380-800 and Qatar's Air Bus A350 are the showstoppers at the fifth civil aviation expo here. Over 200 brands are participating in the fifth edition. The last two days — March 19 and 20 —  are open to the public. Leading manufacturers — Boeing, Airbus, Textron, Embraer, Gulfstream, Dassault, Agusta Westland, Bell Helicopters — and engine manufacturers  CFM, UTC, GE Aviation, Rolls Royce, Pratt & Whitney showcased their products and  expertise. As many as 29 aircraft ranging from small business jets to big aircraft will be on display. Flying display was arranged by Mark Jefferies from UK.

Veera bus, a 100 per cent made in india product displayed at the show
Veera, a boarding and de-boarding airport coach — claimed  to be a 100 per cent Make in India product — was on display at the civil aviation show here for the first time. The 14.5 metre-long coach can accommodate 106 passengers and has pneumatic cylinders. This enables the bus to tilt up to 180mm from the ground for passenger  comfort. 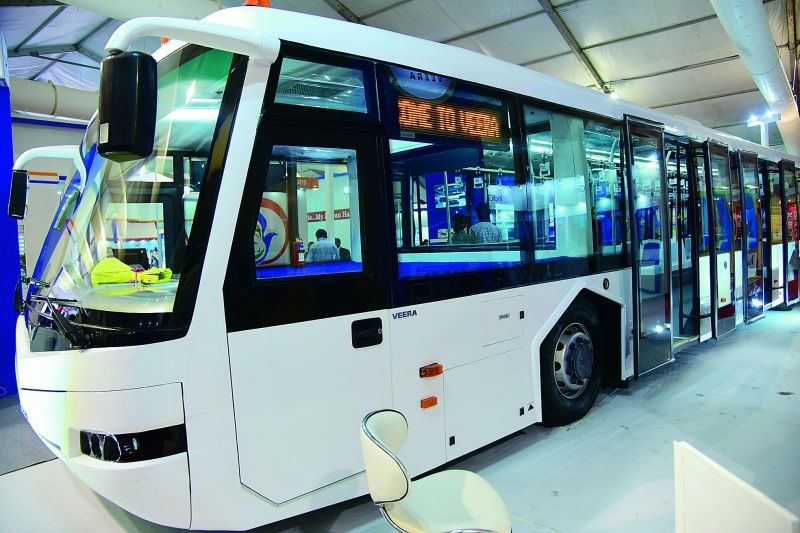 The made in India Veera bus on display at the 5th edition of India Aviation 2016 at the Begumpet airport on Wednesday. (Photo: DC)

Air India will purchase 25 Veera coaches, costing Rs 2 crore each. Arun Rao, VP, Sales, Veera Vahana Udyog, explained about the  coach: “The official name is Tarmac Coach. This helps travel passengers to the aircraft and vice versa. There are only two manufacturers for this coach in the world — in Germany and Solvenia — while India starts the third. So far only two coaches were manufactured after the unit’s launch six months ago.