New Delhi: Observing that the issue of drinking water has to be placed on a “higher pedestal” and recognising the needs of “global city” Bengaluru, the Supreme Court on Friday increased the share of Cauvery water for Karnataka by 14.75 thousand million cubic feet and reduced Tamil Nadu’s share, setting off jubilations and strong prtests in the two states, respectively.

“Drinking water requirement of the overall population of all the states has to be placed on a higher pedestal as we treat it as a hierarchically fundamental principle of equitable distribution,” said a bench headed by Chief Justice Dipak Misra, increasing Karnataka’s allocation by 4.75 TMC for drinking water and 10 TMC towards industrial and other uses.

The politically sensitive verdict comes just months before the Karnataka Assembly elections, boosting the ruling Congress. While the verdict sparked celebrations in Karnataka, in Tamil Nadu there was criticism of the verdict across the political spectrum. 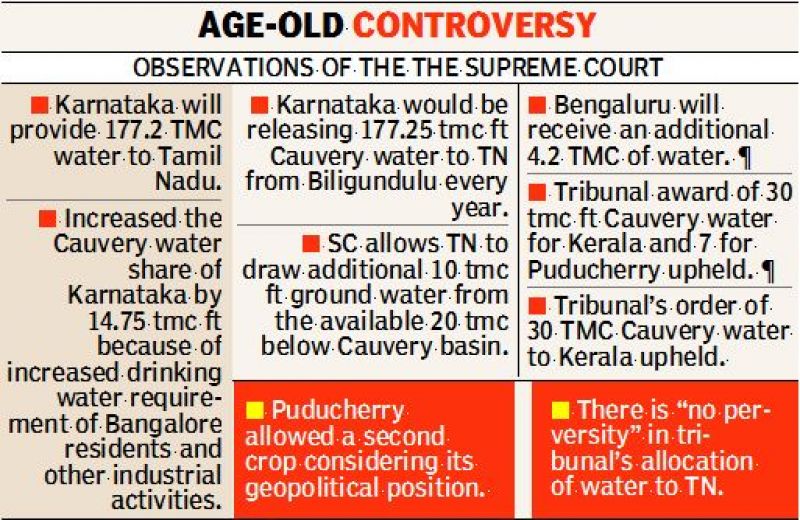 Aspiring politician-cum-superstar Rajinikanth described the court decision as “very disappointing” as it will affect the livelihood of farmers. He also asked the Tamil Nadu government to file a review petition against the decision. Actor Kamal Haasan also sought a review of the apex court decision and called for calm in the state and advised judicious use of water.

The original water-sharing agreement between the states was signed between the Madras Presidency and the princely State of Mysore in 1924 and it lapsed in 1974, giving rise to a dispute. Rejecting Karnataka’s contention that since the Cauvery originates in the state, it  can utilise its water in its own way, the bench, which also included  Justices Amitava Roy and A.M. Khanwilkar, said that the waters of an inter-state river passing through the corridors of the riparian states are a national asset and cannot be said to be located in any one state.

“Being in a state of flow, no state can claim exclusive ownership of such waters or assert a prescriptive right so as to deprive the other states of their equitable share,” the bench added.

While distributing the 740 TMC water available in the Cauvery basin among states, the court said that Karnataka will get 270 TMC + 14.75 TMC, Tamil Nadu 404.25 TMC (419-14.75), Kerala 30 TMC and Puducherry 7 TMC. The remaining 14 TMC has been reserved for environment protection and meeting emergencies.

The court made it clear that the monthly release of water would remain in force for another 15 years.