KOCHI: Two Scottish women hopped from one stage to the other at the CBSE State School Youth Festival on Friday unable to hold their curiosity seeing the artforms of Kerala and were thrilled by the performance of the little ones.

In fact they entered the venue shell-shocked seeing a group dance performance that told the story of Darika and Kali and beheading of Darika. “We saw blood dripping from a trunk and we were shocked. But then the accompanying teachers from Nirmala Public School, Muvattupuzha, familiarised us with the story and cooled us down,” said Mary Murphy, a retired a teacher, who is in Kerala for the fourth time, her eyes oozing out in excitement. 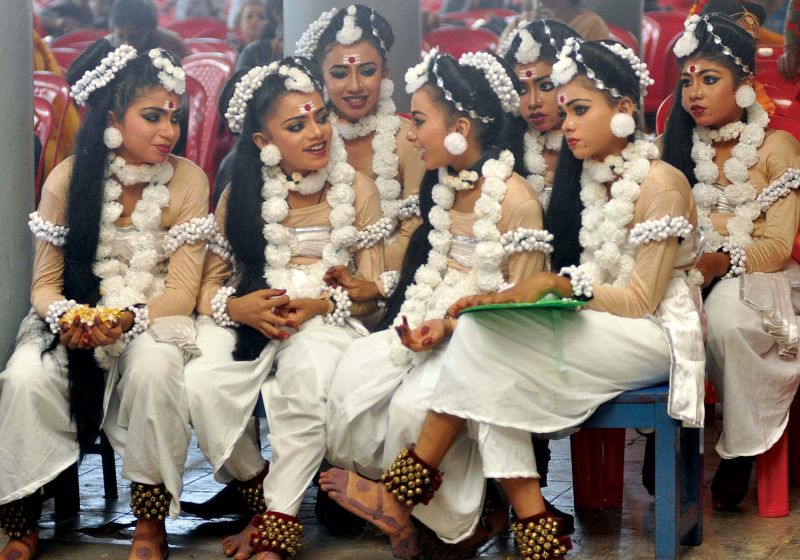 Participants of group dance in a leisure mood waiting for their turn at the CBSE State Youth Festival 2019 at Carmel Public School, Vazhakulam on Friday (Photo: SUNOJ NINAN MATHEW)

She has Mairi Theresa Cleary who is a visiting teacher at St Antony’s Primary School at Armadale in Scotland, for company in this visit.

Both are this time hosted by Nirmala Public School as part of an exchange programme and it is for the first time they are seeing a youth festival of this kind. “Back home, we don’t have such festivals for our students,” said Mary.

“This is creative, imaginative and spectacular,” both Mairi and Mary couldn’t hide their excitement after seeing Margam Kali, group dance and Ottanthullal at various stages. Mary said the Kerala community in Scotland also organises festivals there and they could witness some.

“There is another festival called ‘Military Tatoos’ which our community organises in Edinburgh on August there which is attended by military men, too. Even international bands and dance troupes participate in it,” said Mairi.

The duo made it a point to interact with the student participants and tried to understand the nittie-gritiies of the art forms.