No sluice gates, yet: BDA blames BBMP for delay

Varthur Lake is still waiting for the completion of the flood-control mechanism.

A trial run of sluice gates at Bellandur Lake happened in July, but Varthur Lake is still waiting for the completion of the flood-control mechanism, and the BDA is blaming the BBMP for delaying the construction of a bridge at Varthur, pushing back the dates for the installation of sluice gates. The Bengaluru Development Authority came up with the idea of installing sluice gates at Bellandur and Varthur lakes after the National Green Tribunal issued them a directive.

“The trial run is not happening since the BBMP has taken up the construction of the bridge. During the recent floods, we tested the gate and it was working fine. We have requested them to finish the work soon so that we take up the construction work,” said Mr B.S. Shivkumar, an engineer member, BDA.

The activists, however, are not happy with the progress. “It is a flood-control mechanism. They were expected to finish it in July before the BBMP took up the construction work in August. It is a chicken and egg story,” said Mr Jagadish Reddy, a member of Varthur Rising.

He said that there is a prediction of heavy rains in October and residents near the lake will suffer. 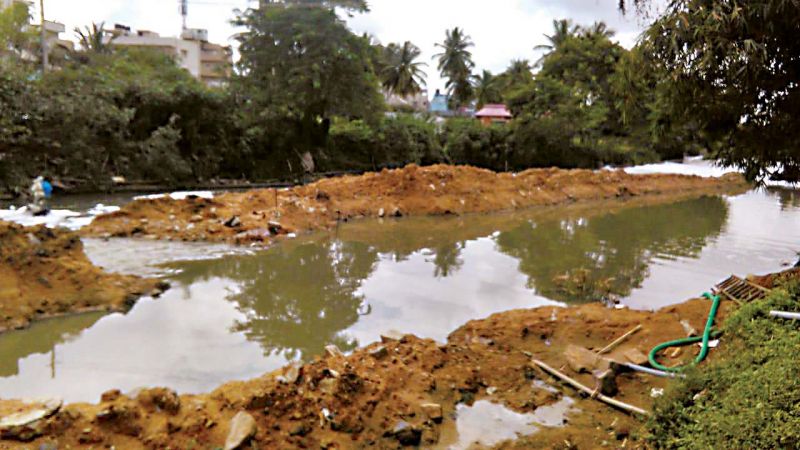 The BDA has written to BBMP Commissioner N. Manjunath Prasad to complete the construction of retaining walls at Bellandur and Yamlur and remodel the main canals at the earliest, so that the BDA can take up froth-control measures.

The letter read, “The delay in completing BBMP's works at Yamalur Kodi has led to diversion of the entire floodwaters to Bellandur Kodi which is causing unprecedented problems."

The BDA requested the BBMP to complete the works soon, or else the NGT would issue a directive again and the BDA would find it difficult to defend itself.

Team visits Bellandur Lake
On Sunday, BDA Commissioner Rakesh Singh along with Bengaluru International Airport Ltd (BIAL) chairman Hari Marar, CII head Neil Castro and team inspected Bellandur Lake to get endowments for the rejuvenation of the water body. Mr Shivkumar said that it was only an inspection and details will be worked out soon.