Chidambaram said that he feels '74-years-young at heart' and that his spirits have been lifted higher. (Photo: File | PTI)

New Delhi: Former finance minister, P Chidambaram who is in Tihar jail and turned 74-years old on Monday spoke of the state of the country's economy.

Asking his family to tweet on his behalf, Chidambaram said, "My thoughts today are about the economy. Just one statistic tells the story. Export growth in August was -6.05 per cent. No country has achieved GDP growth of 8 per cent without exports growing at 20 per cent a year," he is reminded that he is 74-years-old but at heart, he feels 74-years-young.

"May God bless this country," read the subsequent tweet.

Chidambaram, who turned a year older said that he feels "74-years-young at heart" and that his spirits have been lifted higher.

"I have asked my family to tweet on my behalf the following: My family have brought me greetings from friends, party colleagues and well-wishers. I am reminded that I am 74 years old. Indeed I am, but at heart, I feel 74 years young. Thank you all, my spirits have been lifted higher," his family tweeted from his official handle. 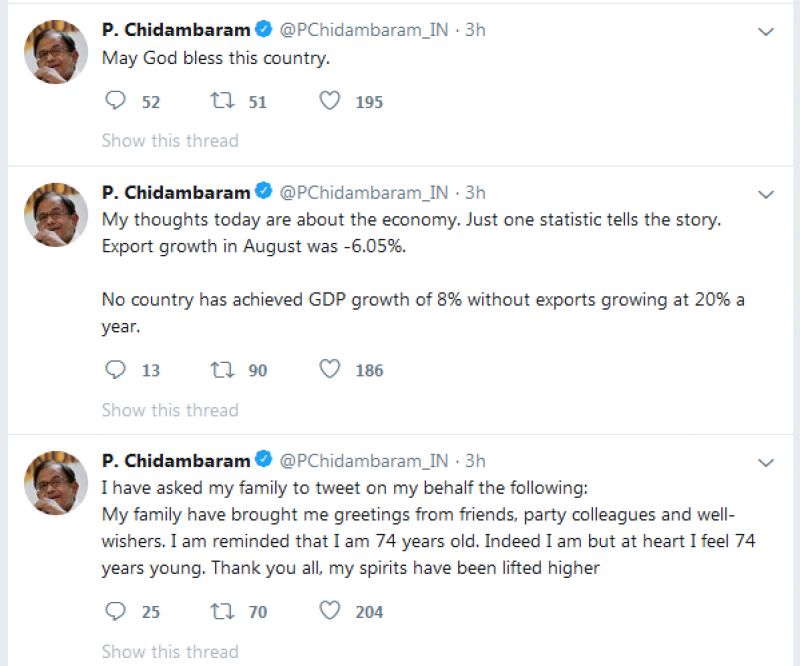 Asking his family to tweet on his behalf, Chidambaram showed concern for the country's economy. (Photo: Twitter | PChidambaram_IN)

The 74-year-old is facing probe in cases registered by both the CBI and the ED pertaining to alleged irregularities in the Foreign Investment Promotion Board clearance given to INX Media to the tune of Rs 305 crore in 2007 when he was the union finance minister.

He was arrested by the CBI on August 21 and sent to its custody for interrogation.