Rivers are swelling toward record levels, forecasters now warn, and thousands of people have been ordered to evacuate for fear that the next few days could bring the most destructive round of flooding in North Carolina history. (Photo: AP)

New Bern: As the death toll from Florence mounted and hundreds of people were pulled from flooded homes, North Carolina is bracing for what could be the next stage of a still-unfolding disaster: widespread, catastrophic river flooding.

After blowing ashore as a hurricane with 90 mph (145 kph) winds, Florence virtually parked itself much of the weekend atop the Carolinas as it pulled warm water from the ocean and hurled it onshore.

At least 10 people have died due to the hurricane-turned-tropical storm.

Rivers are swelling toward record levels, forecasters now warn, and thousands of people have been ordered to evacuate for fear that the next few days could bring the most destructive round of flooding in North Carolina history.

Stream gauges across the region showed water levels rising steadily, with forecasts calling for rivers to crest Sunday and Monday at or near record levels: The Little River, the Cape Fear, the Lumber, the Neuse, the Waccamaw and the Pee Dee were all projected to burst their banks, possibly flooding nearby communities.

Authorities ordered the immediate evacuation of up to 7,500 people living within a mile (1.6 kilometers) of a stretch of the Cape Fear River and the Little River, about 100 miles (160 kilometers) from the North Carolina coast. The evacuation zone included part of the city of Fayetteville, population 200,000.

John Rose owns a furniture business with stores less than a mile (1.6 kilometers) from the river. Rain-soaked furniture workers helped him quickly empty more than 1,000 mattresses from a warehouse in a low-lying strip mall.

“It’s the first time we’ve ever had to move anything like this,” Rose said. “If the river rises to the level they say it’s going to, then this warehouse is going to be under water.”

On US Route 401 nearby, rain rose in ditches and around unharvested tobacco crops along the road. Ponds had begun to overflow, and creeks passing under the highway churned with muddy, brown water. Further along the Cape Fear River, grass and trees lining the banks were partly submerged, still well below a highway bridge crossing it.

“It’s hard to believe it’s going to get that high,” says Elizabeth Machado, who came to the bridge to check on the river.

Fayetteville’s city officials, meanwhile, got help from the Nebraska Task Force One search and rescue team to evacuate some 140 residents of an assisted living facility in Fayetteville to a safer location at a church.

Already, more than 2 feet (60 centimeters) of rain has fallen in places, and forecasters saying there could be an additional 1½ feet (45 centimeters) before Sunday is out.

“I cannot overstate it: Floodwaters are rising, and if you aren’t watching for them, you are risking your life,” Governor Roy Cooper said.

As of 11 pm, Florence was centered about 40 miles (65 kilometers) east-southeast of Columbia, South Carolina, crawling west at 3 mph (6 kph) — not even as fast as a person walking. Its winds were down to 40 mph (75 kph). 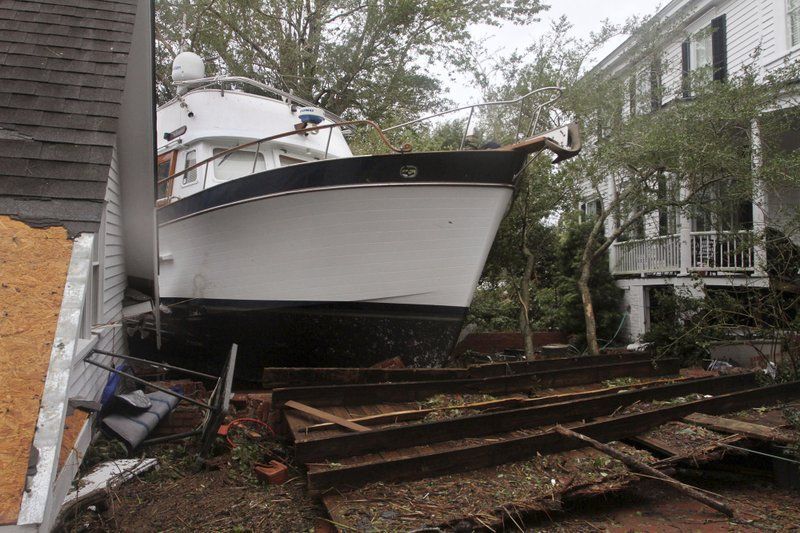 A 40-foot yacht lies in the yard of a storm-damaged home on East Front Street in New Bern, North Carolina on Saturday. The boat washed up with storm surge and debris from Hurricane Florence. (Photo: AP)

In Goldsboro, North Carolina, home of Seymour Johnson Air Force Base, roads that frequently flood were already closed Saturday by rushing water. Dozens of electric repair trucks massed to respond to damage expected to hit central North Carolina as rainwater collected into rivers headed to the coast. Hundreds of thousands of outages have been reported.

A creek that feeds into the Neuse was rushing over a road near Phil Eubanks’ home Saturday. Another creek backed up into their basement Friday, but based on past experience Eubanks and his wife think the worst is over for them.

“I didn’t sleep last night. It was creeping up those steps” from the basement, said his jittery wife, Ellen. “It came up. It went down today. I think we’re OK.”

On Saturday evening, Duke Energy said heavy rains caused a slope to collapse at a coal ash landfill at a closed power station outside Wilmington, North Carolina. Duke spokeswoman Paige Sheehan said about 2,000 cubic yards (1,530 cubic meters) of ash were displaced at the Sutton Plant and that contaminated stormwater likely flowed into the plant’s cooling pond.

Sutton was mothballed in 2013 and the company has been excavating ash to remove to safer lined landfills. The ash left behind when coal is burned contains toxic heavy metals, including lead and arsenic.

In New Bern, along the coast, homes were completely surrounded by water, and rescuers used inflatable boats to reach people Saturday. 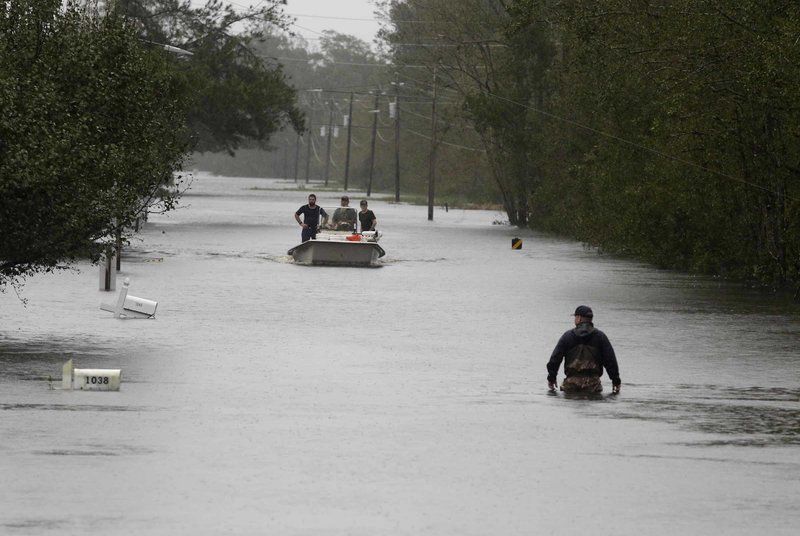 Kevin Knox and his family were rescued by boat from their flooded brick home with the help of Army Sergeant Johan Mackie, whose team used a phone app to locate people in distress.

“Amazing. They did awesome,” said Knox, who was stranded with seven others including a boy in a life vest.

New Bern spokeswoman Colleen Roberts said 455 people were safely rescued in the town of 30,000 residents. She called damage to thousands of buildings “heart-wrenching.”

Across the Trent River from New Bern, Jerry and Jan Andrews returned home after evacuating to find carp flopping in their backyard near the porch stairs.

Coast Guard helicopters took off across the street to rescue stranded people from rooftops and swamped cars.

The Marines rescued about 20 civilians from floodwaters near Camp Lejeune, using Humvees and amphibious assault vehicles, the base reported.

The dead included a mother and baby killed by a falling tree in Wilmington, North Carolina. South Carolina recorded its first death from the storm, with officials saying a 61-year-old woman was killed when her car hit a tree that fell across a highway.

Three died in one inland county, Duplin, because of water on roads and flash floods, authorities said. A husband and wife died in a storm-linked house fire, officials said, and an 81-year-old man died after falling while packing to evacuate.