Chennai Metro: Why do ticket counters close at 10 pm?

Commuters at the Ekkattuthangal metro station recently complained that the exit shutters were down even before their train had reached the station.

Chennai: ‘World-class’ Chennai metro services extend beyond 10 pm, but sales counters where tickets are sold close at 10 pm, making transit simply impossible for several commuters who don’t possess smart cards. While the metro stations in the entire country issue tickets till two minutes before the last train arrives, CMRL ticket counters are deserted even before 10 pm at times.

Commuters at the Ekkattuthangal metro station recently complained that the exit shutters were down even before their train had reached the station.

“Though CMRL proposes a worldclass transit and claims passenger’s comfort to be its priority, its actions prove otherwise. While the trains are plying post 10 pm, the ticket counters are sometimes closed even 10 minutes before that. The operations department’s action on this is imperative,” said V. Prasanna, a commuter.

Another commuter complained that he had begged the officials to issue a ticket as he was in an emergency, but the officials paid no attention as they were in a hurry to leave.

An official at the Alandur metro station told DC that in a few circumstances tickets are issued in the window time.

“If the number of passengers is above 10 or during the weekends when the patronage is really high, we issue tickets even after 10 pm,” he said.

Another official from the operations department of CMRL said initially they came across instances when the commuters would buy tickets past 10 pm and complain that they missed the train demanding a refund – the reason why ticket sales are halted at 10 pm sharp.

Parking woes continue
Chennai metro rail is competing with private shopping malls and movie theatres when it comes to parking charges. CMRL commuters cry foul over the exorbitant night charges levied after 11 pm. The irony is that CMRL has already slashed its parking charges by 50 per cent nearly 5 months back.

The commuters at the airport metro station have to pay Rs 3,500 for four-wheelers and Rs 500 for two-wheeler to get a monthly pass, which is not applicable for night halt. To park the vehicles post 10 pm, four wheelers are charged Rs 350 and two wheelers Rs 100. 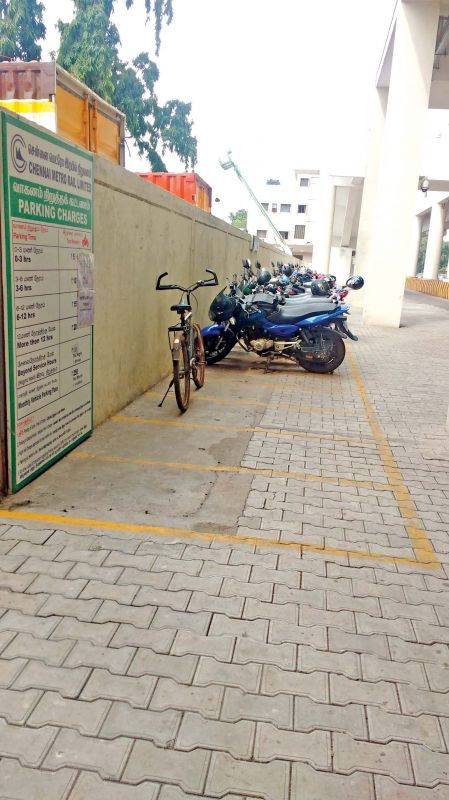 “The fare increases after every three hours and even if we reach, five minutes post 11, and we are forced to pay the hourly multiplied amount along with the overnight charge. We end up paying more than what a cab driver would charge us for a round trip,” rued S. Priya, a passenger.

In other stations, the commuter is charged anywhere between Rs 50 and Rs 100 for a night halt.

When DC visited a few stations, it was found that most of them were charging more than the permissible amount and a few stations are levying night charge as early as 10 pm. Commuters rue that the ticket checkers are flouting norms as the ticket charges mentioned on huge hoardings outside the parking areas do not match the ones in reality.

When contacted, an official at the Alandur metro station said the reason behind exorbitant prices was that they were working “behind the business hours” as metro rail does not function post 11 pm.

Moreover, commuters at Nanganallur and Meenambakkam metro stations rue that they do not possess a car parking facility and the passengers are forced to either park in Alandur or airport and take a detour.

Kiosks at CMRL unaffordable
The elite transit, which the Chennai metro rail claims to provide at an affordable price, does not seem to happen in reality. When state government facilities are moving towards cost effective Amma canteens providing drinking water and food at subsidised prices, the kiosks set up at metro rail are completely going the corporate style.

“In all the other services provided by the Central government, Rs 50 can fill your tummy. Whereas, in metro stations that are filled with private high-end eateries, one can hardly buy a water bottle as most stations still do not provide free drinking water despite repeated complaints,” said K.Lavanya.

When contacted, an official from the business development department of metro said, “The eateries come up on open competitive process. As a lot of money goes into providing world-class amenities to passengers, operating cost must be either met through ticket charges or through eateries. We have chosen the latter as the passengers have already been complaining about the former,” he said.

BJP has stooped down to divisive politics: Owaisi