Police said tight vigil was being maintained across the state, especially at the Tamil Nadu-Karnataka border. (Photo: ANI/twitter)

Chennai: A dawn-to-dusk bandh called by several farmers and traders bodies over the raging Cauvery dispute began on Friday across Tamil Nadu amid tight security with Opposition parties, including the DMK, supporting it.

DMK leader Kanimozhi, who was protesting along with other party workers over the dispute was detained by the Tamil Nadu police at around 10 am.

The bandh has been called in protest against the violence targeting people from Tamil Nadu who live in Karnataka, and also to seek Cauvery water for the state.

Those who had called for the bandh are carrying out a series of protests, including "road and rail roko".  Tamil Nadu farmers' association staged a 'Rail Roko' protest at Saidapet railway station.

Thousands of police personnel have been deployed across the state to maintain law and order. Police said tight vigil was being maintained and no attempts to mar public peace or disruption of free movement of transportation -- on road or rail -- would be allowed. 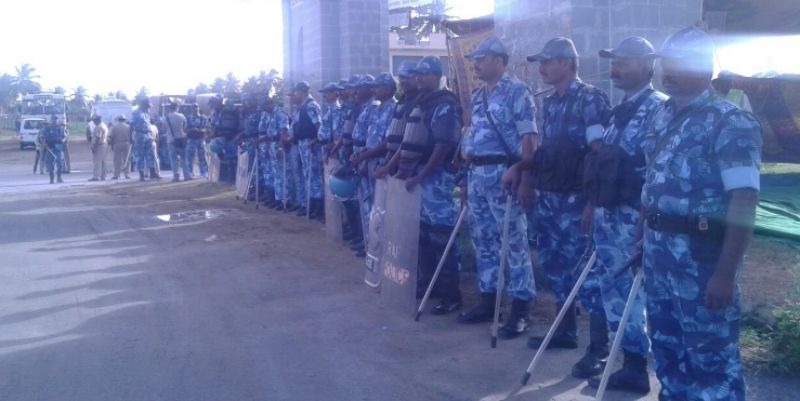 More than one lakh police men have been positioned all over the state to prevent any untoward incident. (Photo: ANI/Twitter)

Several local grocery shops, which usually open by daybreak, remained shut in view of the protests. State transport corporation-run buses besides trains are being operated as usual though autos, taxis and commercial freight operators remained off the roads.

Normal life has been hit in most parts of the state, especially delta districts. Private schools are closed but most of the government schools will be opened today.

In Chennai, people prepared themselves by buying groceries and vegetables for Friday and many of the supermarkets were crowded. Conscious Chennaiites filled their vehicle tanks in advance as petrol bunks would remain closed. Most of the markets were crowded with women buying vegetables and flowers for worship and pooja, as the bandh day happens to be a full moon day, besides Friday.

The milk vendor associations said they would sell milk, which is listed in the essential commodity category, but extended moral support to the agitations. Pharmacists too came with a similar statement.

Traders unions who are taking part in the protest, said about 21 lakh shops throughout the state would down shutters. Besides, about 4,300 shops in Koyambedu market selling flowers, vegetables and fruits too would not function.

Tight security has been given to central government offices, railway stations and banks including Karnataka-Tamil Nadu checkpost border near Attibele.

The Supreme Court on Thursday had expressed its dismay over people taking the law into their own hands, and insisted that the state authorities take immediate preventive action.

No coercive step to be taken against Tajinder Bagga: HC after late-night hearing