Fishing alongside the banks of Krishna river. (Photo: PTI)

Hyderabad: The Centre on Friday issued notification and directed the Krishna and Godavari River Managament Boards (KRMB and GRMB) to overlook all the irrigational projects, putting an end to the ongoing row between Andhra Pradesh and Telangana.

The move comes two days after the Andhra Pradesh government went to the Supreme Court seeking directions from the Ministry of Water Resources to take control over the common reservoirs.

The two Telugu states, which have been involved in an unending dispute, have been asked not to interfere in the work of the respective boards. The boards have been formed under the Andhra Pradesh Reorganisation Act, 2014.

The Union Ministry of Water Resources issued a gazette notification at midnight on the scope and management guidelines of the boards. 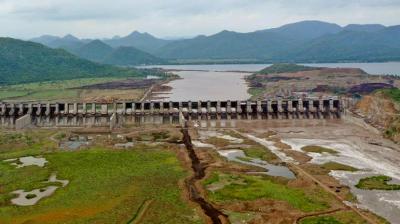 The Centre has said that the gazette would come into force from October 14, adding that the two Telugu states will have to "completely handover" the administration, operation, maintenance, and regulation of their respective projects or components ((barrages, dams, reservoirs, regulating structures) on that day.

The notification also added that the states will have to hand over the operations of hydel power plants, part of the canal network, and transmission lines as well.

“On and from the date of commencement of this notification, in respect of operational projects or from the date when a non-operational project becomes operational, as the case may be, the state governments of Andhra Pradesh (AP) and Telangana (TS) shall completely hand over the jurisdiction of the projects or components (barrages, dams, reservoirs, regulating structures), part of the canal network and transmission lines specified in Schedule-2 to this notification to the KRMB and GRMB so as to enable it to perform the functions mentioned in sub-section (1) of section 85 of the AP Reorganisation Act, 2014,” the notifications read.

It added that no person from the two states shall be appointed as the Chairman, member-secretaries, members, or chief engineers of the board. 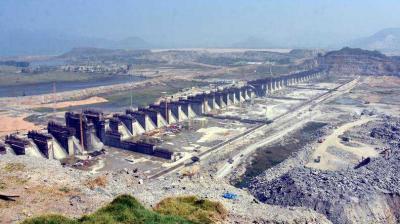 It also added that both the states will be responsible for the management of projects in the event of natural disasters.

A total of 36 approved and unapproved projects, including components, extension schemes, lift projects of Srisailam, Nagarjuna Sagar, Pulichintala, Krishna Delta, Tungabhadra, KC Canal, Jurala, Dindi, and others in Krishna basin in both the states have been included in the schedule of the KRMB.

Meanwhile, GRMB has 71 approved and unapproved projects and components in the Godavari basin in both the states, including Polavaram, Kaleshwaram, and other lift and diversion schemes.

Schedule-I has a list of 36 Krishna and 71 Godavari projects and their components, while the remaining two schedules are subsets of the first list. 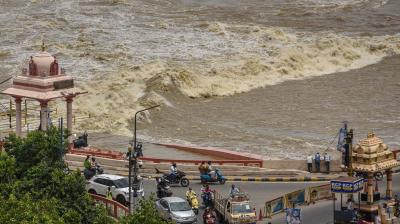 Vehicles ply on Prakasam Barrage as surplus water from Pulichintala Project is released into the Krishna River, in Vijayawada. (Photo: PTI)

The three schedules include all the operations to be managed by the two boards. Projects in schedule-I are those on which KRMB and GRMB will "ordinarily" have jurisdiction, while schedule-II contains jurisdiction and fucntions of administration, operation, maintenance, and regulation that the boards have to take over.

However, projects under schedule-III projects will be the functions performed by the respective states on behalf of the boards as per their directions, but will be under the jurisdiction of the boards.

The Centre has also given directions to both the states to stop the works of the unapproved projects and to get them cleared in six months.

The state governments have also been directed to deposit Rs 400 crore each – Rs 200 crore each for KRMB and GRMB – within 60 days from the date of notification to enable the boards to discharge their duties effectively.