No takers for Telangana buses plying to Shirdi, Tirupati

On week-days, only three or four buses ply on the Shirdi and Tirupati routes, and a few more run within the twin cities to different tourist and archaeological sites.

Hyderabad: While the TS tourism department is flying high with its promotional activities in the skies through a tie-up with SpiceJet, on the ground it is failing to attract passengers. Its fleet of buses is under-utilised and only a few are plying on select routes.

The department has over 50 buses out of which 43 are in condition, but barely 23 per cent are in operation through the week.

On week-days, only three or four buses ply on the Shirdi and Tirupati routes, and a few more run within the twin cities to different tourist and archaeological sites.

The situation is a little better on weekends and holidays when there are between five and 10 services to the two pilgrim centres. There are reasons for the poor demand of the government run bus service. One is the lack of publicity about the service. Another is the introduction of trains to Shirdi from Telugu states. 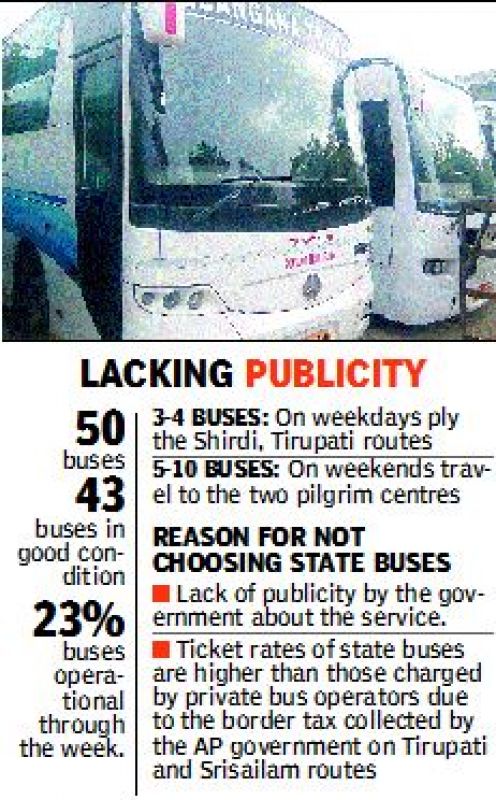 A border tax is collected by the AP government on the Tirupati and Srisailam routes after bifurcation and this has pushed up the ticket rates, above those charged by private competitors.

Of the 43 buses, 27 are AC buses, nine Volvo and five Benz, six are mini-buses with 6-26 seats. There are 15 non AC buses with one caravan vehicle.

According to tourism officials, 10 years ago, seven to eight buses used to ply to Shirdi every day and during weekends and holidays, 12 to 14. At that time there was just one train service to Shirdi, while now there are at least five.

“In the combined state there was no border tax for tourism buses that were operating from Hyderabad to Tirupati or Srisailam. Operating costs have shot up. It is time both governments give exemption to tourism buses that are mostly used by middle or lower middle classes, since the upper classes prefer to travel in their own cars. Also, the buses have become quite old and new buses should be added with features like sleeper facility,” an official said.

Some of the buses have completed 11 lakh km and even Volvo, the company that manufactures them, is surprised that they are still running.

A senior official of the department said, “There is an immediate need to to position and brand Telangana state. The SpiceJet initiative is laudable, but something has to be done to bring buses back on the roads once again and to use them optimally.”

All set for Ganesh immersion tomorrow

Fake Indian currency notes: AP among states where seizures were among highest

Centre: Women to be inducted in NDA, to get permanent commission